Trey Gowdy Stated That Hillary’s Crimes Are Much Worse Than Anyone Could Imagine!!!  spinzon July 30, 2017

“In politics nothing happens by accident. If it happens, you can bet it was planned that way.” – Franklin D. Roosevelt
According to today’s news, when James Comey leaked those memos, he revealed classified information. We knew all this, so why has it suddenly gone mainstream? First of all, he knows too much. He did everything in his power to navigate the swamp before he was fired. Now, Washington’s criminal elite needs a scapegoat and the way he handled the Clinton email investigation irritated people on both sides of the political divide. That made him the perfect sacrificial lamb.
Congressman Trey Gowdy, who is a frequent critic of Jim Comey had recently stated:
“There have been plenty of differences between me and Jim Comey. I believe history is going to be much kinder to him over his last month’s press conference when he declined Hillary’s prosecution, than the Democrats ever will. He had access to all kinds of classified information that he’s not willing to release.”
Gowdy is bringing up something two months old. Comey worked the case more than a year and this was his conclusion: the entire government was involved. An agent with knowledge of the case described Comey’s dilemma like this:

“This situation is so big that it is enough for the entire government to be brought down. Americans do not see this. The Clinton Foundation is the biggest problem. Just imagine it as a spider web of connections and money laundering involving huge number of high-level people. A million other cases could come up from this one if it’s fully brought to light. After that, we would be one agency against the entire government. The position is highly tense and uncomfortable.”
Comey decided to avoid a “massive sh*tstorm,” as described. The ,,sh*tstorm” would have come as a result from exposing the entire globalist power structure.
That’s the reason he let Hillary to destroy their personal computers and devices and not to conduct a proper investigation in accordance with standard F.B.I. collection of evidence procedures.
There was one thing that stood in the way of Comey’s success in protecting the Clintons’ criminal syndicate: the NYPD finding of Anthony Weiner’s laptop – it had almost all of the evidence that Comey has sought to eviscerate.
Comey should definitely not be forgiven for turning his back on his responsibility to dig our corruption wherever he found it. Even that is not the reason he’s the target of Washington’s swamp, the reason is quite the opposite. Clinton co-conspirators are getting more desperate every day with their wish to stop the president Trump from keeping his promise to drain the swamp and James Comey.

We all had some suspects about the Clintons’ criminal actions, but what Trey Gowdy just revealed is way worse that anyone could imagine.

Portland, Oregon – The city of Portland released a man that had a federal immigration hold on him and had been deported at least 20 times who then went and allegedly assaulted two women, including a 65-year-old woman.
Portland has declared itself a sanctuary city which means it doesn’t cooperate with the federal government in terms of enforcing the immigration law.
Sergio Martinez attacked a woman in the basement of a parking garage while armed with a knife, according to Fox News. When the woman kicked him in the stomach and hit the button that set off her car alarm, Martinez fled. Detectives also linked Martinez to another assault that happened blocks away, Fox News reported.
In the second assault, Martinez entered through an open window and used scarves and socks to blindfold, tie up and gag the victim. He then sexually assaulted the woman and slammed her head into the wood floor.
Sergio Martinez was caught July 24 when police chased him through a neighborhood.
Immigration and Customs Enforcement (ICE) had an immigration detainer on Martinez since December, 2016. ICE had asked the local authorities to notify them before letting Martinez go. However, the city of Portland didn’t do that and just released Sergio Martinez.
It’s against the law for cities in Oregon to use their resources to enforce federal immigration law, but there’s no reason that they can’t tell ICE about people already in custody.
Multnomah County Sheriff Mike Reese wrote a letter to the city of Portland that said, “The Sheriff’s Office does not hold people in county jails on ICE detainers or conduct any immigration enforcement actions.”
Martinez’s criminal record included a felony conviction for burglary and three misdemeanor convictions for battery, theft, and obstructing a public officer.
Martinez told police in March that he has a long history of using methamphetamine and was still using the drug, KGW.com reported. He is facing charges that include first-degree kidnapping, two counts of first-degree robbery, second-degree assault, first-degree sex abuse, first-degree sodomy and first-degree burglary, the TV station reported.
Martinez had lived in the area for more than a year and was believed to have been homeless at the time of his arrest.
Posted by Pappy at 9:02 PM No comments:

U.S. Immigration and Customs Enforcement has arrested 114 illegal immigrants and fugitives in New York during an 11-day operation.

Eighty-two of those arrested in the operation have prior criminal histories, including a Mexican national convicted of first degree manslaughter, an Ecuadorian convicted of rape, and 17 more who have been convicted of driving under the influence.

Approximately another dozen of those arrested have been convicted of drug trafficking offenses while several others were in possession of drugs.

The 114 arrested individuals are from a total of 35 different countries. Ten of those arrested were women.
Source: Washington Free Beacon
Posted by Pappy at 3:30 PM No comments: 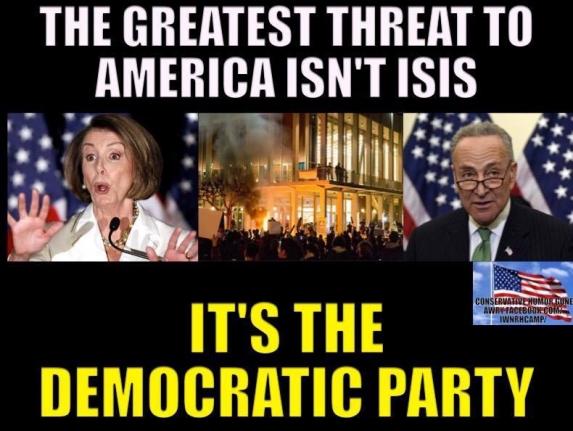 This Obama Scandal Was An Unspeakable Crime Against Trump There was one big scandal in the 2016 election.
And it wasn’t Russia.
Now Americans are learning the Obama administration committed unspeakable crimes against Donald Trump.
House Intelligence Committee Chairman Devin Nunes blasted the Obama administration for abuse of power.
Nunes sent a letter to Director of National Intelligence Dan Coats describing Obama officials putting in hundreds of requests to unmask American citizens caught up in surveillance.
These requests included Trump transition officials and had no intelligence value.
The Hill reports:


“Intelligence Chairman Devin Nunes (R-Calif.), in a letter to Director of National Intelligence Dan Coats, said the requests were made without specific justifications on why the information was needed.
“We have found evidence that current and former government officials had easy access to U.S. person information and that it is possible that they used this information to achieve partisan political purposes, including the selective, anonymous leaking of such information,” Nunes wrote in the letter to Coats.
The letter was provided to The Hill from a source in the intelligence community.
In March, Nunes disclosed that he had seen data suggesting Trump campaign and transition officials were having their names unmasked by departing officials in the Obama White House.”

In March, Nunes announced he had reviewed information about the number of unmasking requests and who was making them had greatly disturbed him.
The Hill also reports:


“The chairman had reviewed intelligence reports on White House grounds that he said showed unmasking of Trump officials by Obama aides. Democrats accused him of working with the White House to make the disclosures.
In Thursday’s letter, Nunes said the total requests for Americans’ names by Obama political aides numbered in the hundreds during Obama’s last year in office and often lacked a specific intelligence community justification. He called the lack of proper justifications a “serious deficiency.”
His letter noted requests from senior government officials, unlike career intelligence analysts, “made remarkably few individualized justifications for access” to the U.S. names.
“The committee has learned that one official, whose position had no apparent intelligence related function, made hundreds of unmasking requests during the final year of the Obama administration,” Nunes wrote. “Of those requests, only one offered a justification that was not boilerplate.”
Sources familiar with the Nunes letter identified the official as then-U.N. Ambassador Samantha Power.
Power did not immediately respond to a request for comment.
Nunes also wrote that “Obama-era officials sought the identities of Trump transition officials within intelligence reports.”

Americans can be unmasked for legitimate intelligence purposes.
But were Obama officials requesting the unmasking of Trump officials so the names could be leaked for political gossip?
That would be a scandal on par with Watergate.
Posted by Pappy at 3:21 PM No comments:

Email ThisBlogThis!Share to TwitterShare to FacebookShare to Pinterest
Question.....If the U.S. is so concerned about Russian "collusion" or meddling in our elections, WHY ? Do we have 755 diplomats living and/or working in Russia ???

755 US diplomats must leave Russia: Putin