bloomberg brags about education in NY 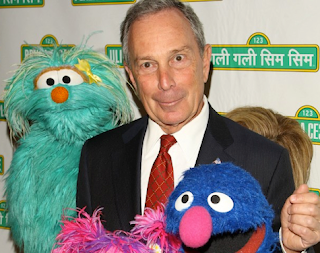 Which one is Bloomberg?
In his last State of the City address, New York City Mayor Michael Bloomberg bragged about his huge taxpayer investments in education. “Now, let me ask you: is there anyone who still believes that New York City can’t get big things done? Since we’re here in Brooklyn, I’ll say it again: Fuhgeddaboudit.”

Bloomberg was right about one thing only: forgetting about it. Because not only are big things not getting done in New York City on education, even small things aren’t getting done

According to officials from City University of New York, a full 80 percent of high school graduates in New York City can’t read when they graduate. As CBS Local reports,
They had to re-learn basic skills – reading, writing, and math – first before they could begin college courses.”
And that’s for the students who graduate! New York City has the lowest graduation rate for black and Hispanic male students in the nation, with only 37 percent graduating.