AND...AOC should go back to "BARTENDING"

“Crisis of Our Democracy”: AOC Calls for Supreme Court Justices to Be Impeached  BY Sharon Zhang,Truthout June 27, 2022

In an interview on Sunday, Rep. Alexandria Ocasio-Cortez (D-New York) called for three far right Supreme Court justices to be impeached, on the basis that their votes to overturn Roe v. Wade violated pledges they made under oath in their confirmation hearings.

As Ocasio-Cortez raised on NBC’s Meet the Press, Senators Susan Collins (R-Maine) and Sen. Joe Manchin (D-West Virginia) have suggested that Justices Brett Kavanaugh and Neil Gorsuch lied in their confirmation hearings and in personal meetings with the senators about whether or not they would consider overturning Supreme Court precedents while serving as justices. Justice Amy Coney Barrett also pledged during her confirmation that she would uphold precedents.

“If we allow Supreme Court nominees to lie under oath and secure lifetime appointments to the highest court of the land…. there must be consequences for such a deeply destabilizing action and hostile takeover of our democratic institutions,” Ocasio-Cortez said. “What makes it particularly dangerous is that it sends a blaring signal to all future nominees that they can now lie to duly elected members of the United States Senate in order to secure Supreme Court confirmations.”

Justice Clarence Thomas should also be impeached for recent controversies concerning his wife, conservative activist Ginni Thomas, Ocasio-Cortez said. “I believe that violating federal law in not disclosing income from political organizations, as Clarence Thomas did years ago, is also potentially an impeachable offense. I believe that not recusing from cases that one clearly has family members involved in, with very deep violations of conflict of interest, are also impeachable offenses.”

READ HERE
Posted by Pappy at 11:15 PM No comments:

Email ThisBlogThis!Share to TwitterShare to FacebookShare to Pinterest
Swalwell compares Boebert to mass shooter day after Highland Park massacre, Boebert fires back July 5, 2022
By Houston Keene  Fox News
Boebert responded the only 'straight line that needs to be drawn' is from 'Swalwell to Fang Fang'
California Democrat Eric Swalwell appeared to compare his Republican colleague Rep. Lauren Boebert of Colorado to the suspect in Monday's mass shooting in Highland Park, Illinois that left six people dead and dozens wounded.

Swalwell posted the tweet on Tuesday appearing to compare the Highland Park, Illinois, shooter who killed six people and injured more than 30 at a Fourth of July parade to Boebert.

"Let’s start drawing straight lines," Swalwell wrote on his congressional Twitter account, posting a picture of Boebert holding an AR-15 rifle juxtaposed to a picture of the suspect, Robert Crimo III.
Swalwell’s tweet could also suggest that the alleged shooter drew inspiration from Boebert. The post came a day after the massacre.

Boebert told Fox News Digital she gets "that Eric Swalwell isn't a fan of our Constitutional rights and is desperate to distract from his repeated political failures, but the only straight line that needs to be drawn is from Eric Swalwell to Fang Fang to the Chinese Communist Party."

"I will make sure that line gets drawn when we take back the House," Boebert continued. "Law-abiding gun owners won't be smeared and disarmed every time a California failed presidential candidate rolls out of bed with a Chinese spy and tries to blame us for the conduct of others."
TWEET
Rep. Eric Swalwell
@RepSwalwell 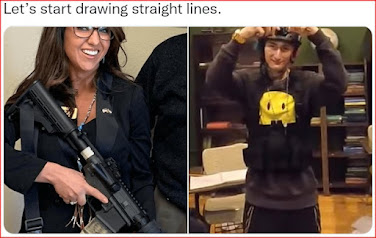 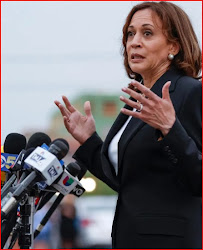 Before I get nasty comments, this article is up to show what the demoRats accuse us REPS of doing...I posted this article not because I liked it but because I HAVE SAID THE SAME THING MANY, MANY TIMES...I agree whole heartedly with Marjorie Taylor Greene. I wouldn't put it past the demoRats to be involved in these mass shootings to bolster their agenda.Taking lawful gun owners guns away using whatever premise they can to do it. But at least there are a few people who agree with me. These shootings always have too many unanswered questions....

Republicans react to another mass shooting with another round of deflection from guns    By ABIGAIL GOLDBERG-ZELIZER  PUBLISHED JULY 6, 2022
Following a mass shooting at a Fourth of July Parade in Highland Park, the right blames drugs and mental illness

Following the mass shooting that took place at the Fourth of July Parade in Highland Park, Ill, which left seven people dead, far-right figures are reaching for their grab-bag of different things to blame the latest massacre on anything but guns.

MAGA politician Rep. Marjorie Taylor Greene, R-Ga., suggested that the attack was part of Democrats' plans to push forward gun reform. Along with blaming Democrats, Greene argued that recent mass shootings have been caused by mental health medications themselves, such as the commonly used anti-depressants like selective serotonin reuptake inhibitors (SSRI).

In a video posted on her Facebook Live series, Greene espoused a wholly unfounded theory that Democrats were involved in the planning of the Highland Park shooting.

READ MORE
Posted by Pappy at 8:58 PM No comments:

Email ThisBlogThis!Share to TwitterShare to FacebookShare to Pinterest
Billionaire Speaks Candidly About Biden: He's Either Lying to America or Truly Clueless  By Andrew Jose July 3, 2022  THE WESTERN JOURNAL

“My message to the companies running gas stations and setting prices at the pump is simple: this is a time of war and global peril,” Biden wrote Saturday on Twitter.

“Bring down the price you are charging at the pump to reflect the cost you’re paying for the product. And do it now,” Biden said on his post.

Bezos criticized Biden for the tweet within hours. “Ouch. Inflation is far too important a problem for the White House to keep making statements like this,” the billionaire wrote.

Ouch. Inflation is far too important a problem for the White House to keep making statements like this. It’s either straight ahead misdirection or a deep misunderstanding of basic market dynamics.

President Biden@POTUS
United States government official
My message to the companies running gas stations and setting prices at the pump is simple: this is a time of war and global peril. Bring down the price you are charging at the pump to reflect the cost you’re paying for the product. And do it now.
9:42 PM · Jul 2, 2022

“It’s either straight ahead misdirection or a deep misunderstanding of basic market dynamics,” he added.

Other Twitter users joined Bezos in slamming Biden, including Republican U.S. House Candidate Omar Navarro of California, who wrote, “Dude we are not a communist country.”

“I keep thinking about this tweet and am continually baffled,” RealClearInvestigations senior writer Mark Hemmingway wrote. “When things are so obviously bad, ‘we feel your pain and we’re doing our best’ is much better political messaging than ‘we’re in denial about how this is happening so let’s blame others.'”

“Now U.S. President finally realized that capitalism is all about exploitation. He didn’t believe this before,” Editor-in-Chief for the Chinese state-run China Daily newspaper Chen Weihua wrote.

Chen also shared a screenshot of a previous tweet where he responded to Biden saying “capitalism without competition” is “exploitation” by writing, “Capitalism is all about exploitation. Period.”

Biden’s Saturday post on Twitter was not the president’s first attempt to blame others for an economic crisis aggravated by his administration’s mishandling of the nation’s macroeconomy.

Biden’s Saturday tweet came as the national average price for gas stood at $4.812, according to the AAA.

Bezos has previously criticized Biden on Twitter for blame-shifting on economic issues. In May, the billionaire slammed Biden for blaming large corporations for the financial troubles by saying they were not paying their supposed fair share.

Bezos wrote, “they understandably want to muddy the topic. They know inflation hurts the neediest the most. But unions aren’t causing inflation and neither are wealthy people.”

Jeff Bezos
@JeffBezos
Look, a squirrel! This is the White House’s statement about my recent tweets. They understandably want to muddy the topic. They know inflation hurts the neediest the most. But unions aren’t causing inflation and neither are wealthy people. Remember the Administration tried…

As the drama around Hunter Biden continues to unfold, it has come to light that he has been under federal surveillance for ties with Chinese figures, according to a recent report.

Paul Sperry, a reporter for Real Clear Investigations, tweeted U.S. counterintelligence officials told him about Biden coming under surveillance and looking into his contacts and deals in China.
TWEET

Paul Sperry
@PaulSperry30
DEVELOPING: US counterespionage officials investigating alleged contacts between Hunter Biden and members of CFIUS during Chinese takeover of US firm making automotive parts w/ dual-use technologies. CFIUS approved the sensitive 2015 deal, which had national security implications
11:24 PM · Jul 4, 2022·Twitter Web App
This is not the first time that the issue of Hunter Biden and his connections to China have made headlines.

Trump particularly accused Hunter Biden of using his position of influence to secure the financial backing of China for his investments.

But at the time Trump provided little evidence of his claims about Biden, and many dismissed it.

But since the contents of Biden’s laptop have been discovered by the New York Post, the connection between Biden and China has some real evidence behind it now.

It has become clearer that the Biden family has strong ties to China and Chinese business and have profited from the connection.

“The Biden family has done five deals in China totaling some $31 million arranged by individuals with direct ties to Chinese intelligence — some reaching the very top of China’s spy agency,” the New York Post reported in January.

“Indeed, every known deal that the Biden family enjoyed with Beijing was reached courtesy of individuals with spy ties. And Joe Biden personally benefited from his family’s foreign deals,” the Post continued.

These deals have been going on for years it appears.

When President Joe Biden was vice president under Barack Obama, Hunter Biden tagged along with him on a trip to China in 2013.

While the older Biden was working on the tensions in the South China Sea, Hunter Biden paid a visit to Jonathan Li, a Chinese financier who ran the private-equity fund Bohai Capital, the New York Post reported.

“Ten days later the Chinese business license for Bohai Harvest — a new company which would invest Chinese cash in projects outside the country that Hunter Biden had been trying to launch for more than a year — was approved by Chinese officials,” the New York Post reported.

As more and more of these connections between Hunter Biden and China have been examined, there seem to be clear indication that the Biden family has immensely profited from their business deals in China.

Hunter Biden’s laptop continues to provide evidence of the connections in China that have helped along the way.

“Hunter Biden’s hard drive contained an enviable lineup of contacts for top US officials tasked with overseeing the US-China relationship, and at least 10 senior Google executives — raising new questions about the extent to which Joe Biden’s well-connected son could have leveraged his connections for personal profit,” the New York Post reported.

But now it has landed Hunter Biden in a tough spot as the security concerns surrounding his connections and business practices are raising questions.
Posted by Pappy at 3:51 PM No comments: