Tucker: This is about attacking Christianity  Fox News

Fox News host reflects on the left's response to the possible overturn of Roe v. Wade, the state of the Biden presidency, and gives his take on the Russia-Ukraine war on 'Tucker Carlson Tonight.' #Tucker#FoxNews
Posted by Pappy at 9:13 PM No comments:

What a Woman Found Walking Her Dog Should Spark More Questions About Election Integrity  Matt Vespa @mvespa1 Posted: May 10, 2022

Democrats can deny it all they want. You can cheat and steal an election. It’s funny how they only bring that up when their side loses. The most recent was the 2018 gubernatorial race. Stacey Abrams still hasn’t really conceded that race. Incoming White House Press Secretary Karine Jean-Pierre outright said Gov. Brian Kemp stole the election. Yet, when we have suspicions about funny business in the 2020 election, it’s all tin foil hat material. I’m preaching to the choir I know, but the evidence is pervasive that you can steal an election. In 1960, John F. Kennedy arguably stole it from Richard Nixon. Some of the last areas to tally their votes just so happen to be in the Chicago area run by political boss Mayor Richard Daley. Nothing suspicious about that, right. The New York Post interviewed someone who has done it before. In Paterson, New Jersey, the city’s elections were invalidated since the fraud was so rampant in 2020. It happens.

COVID was used by Democrats to illegally tweak election procedures. Secretaries of state in key swing states unilaterally changed voting regulations which the courts said they were not permitted to do. They needed state legislature approval which these Democratic officials were not going to get in Pennsylvania and Michigan, both of which have Republican legislatures. So, as we argue about ballots being harvested, the level of security with the last election, and the absence of a chain of custody regarding these ballots—let’s go to California where a woman walking her dog just so happen to stumble upon a box of ballots. Yeah, nothing unusual about that, right? The woman secured the ballots in her home and tried to figure out what to do next. It seems as if she called every local office she could think of to figure out what to do next  (via Fox 11): 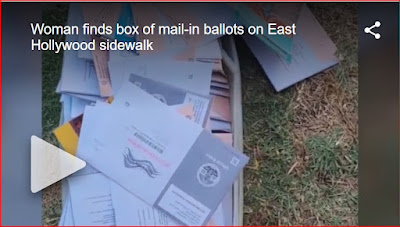 The Los Angeles County Registrar's Office and the United States Postal Service are investigating after 104 ballots were found unopened on the sidewalk in East Hollywood.

The ballots were found by Christina Repaci, who was walking her dog Saturday evening.

"I turned the corner and I just saw this box of envelopes, and it was a USPS box. I picked some envelopes up and I saw they were ballots," said Repaci.

Repaci said after much back and forth, the LA County Registrar's Office got in contact with her about picking up the ballots. Registrar Dean Logan personally drove to pick up the ballots.

"He (Logan) picked them up. I made sure he was legit. He gave me a card, and took a photo of the box," she said.

Repaci described the process as "stressful."

"It was so much stress ad for just one person to get back to me. What do I do here? Now if it happens to someone else, they don't know what to do. They'll just put them in a dumpster or throw them in the trash. I just don't think it should have been this hard to figure out what to do with legal ballots. This is a country of freedom and our votes should matter and something like this should never happen," said Repaci.

Easy there, Ms. Repaci. You could be censored for speaking common sense. This is why election integrity laws are ke. This is why the mail-in ballot process with zero signature verification is some fugazi nonsense.
Posted by Pappy at 8:37 PM No comments:

Yawn – Yet Another Never Trump Loser Sucks Up to the Media   Kurt Schlichter  Posted: May 09 2022

If there’s a genre that’s worn out its welcome, it’s the self-hagiographical tell-all tome by some second-tier Trump administration hack who tries to leverage his track record of failure into a cash advance and some MSNBCNN hits fielding softballs from guys best known for punishing the primate on Zoom calls. How fitting. The latest example is Mark Esper, who would be the worst Secretary of Defense ever if not for the determined competition from the current one. I would not normally name this pompous tool’s ridiculous book, but his title is just too hysterically funny – “A Sacred Oath.” Yeah, he really named it that on purpose – pretentious, self-important, and so utterly DC that you need a heart of stone not to burst into laughter. I won’t link to oathboy’s book, though – instead I’ll link to my new book, which, in stark contrast, is based and will actually be read instead of stuck on a shelf next to the dusty musings of such comparable luminaries as Omarosa and Anonymous.

Even Donald Trump’s greatest defenders have to admit that the president’s personnel record was, well, mixed, veering from astonishingly insightful talent-spotting, as in the cases of National Security Advisor Robert O’Brien and Ambassador Ric Grenell (Full Disclosure: Both are friends) to astonishing missteps like Rex Tillerson, John Bolton, and this Esper chump. Not surprisingly, according to journalists who have had their interns skim his upcoming book, Esper expends a lot of ammunition attacking both O’Brien and Grenell. They would be the guys who merely helped bring peace to the Middle East, solve the Kosovo-Serbia dispute, and get NATO to start carrying its weight – all of which have come in pretty handy lately. In contrast, Esper – who you will not be shocked to learn worked for Raytheon before coming to the Pentagon – is a historical footnote whose Wikipedia page spends a lot of time talking about how he was very focused on welcoming transgender troops. There’s a sign of seriousness. His legacy is decline and pronoun justice.

But that hasn’t stopped Esper from making the rounds of the regime journalists, who are only too happy to give the mic to a Trump turncoat for a few moments before relegating him back to his much-deserved obscurity. Here are some of his greatest hits – and what is hilarious is that he’s probably proud of them.

Esper claims he stopped Trump from sending in troops to get serious and suppress the 2020 Democrat riots. Well, I was part of the Army response to the LA Riot and we ended that nonsense in three days. The 2020 rioting went on all summer. Great call, dude.

Esper claims he stopped Trump from helping the Mexican government fight the drug cartels by blowing up drug labs. Well, with 100,000 Americans dead from fentanyl a year, if we have to fight a foreign enemy maybe it should be the enemy next door that’s literally killing 100,000 Americans a year instead of the foreign policy establishm
READ ON
Posted by Pappy at 8:12 PM 1 comment: 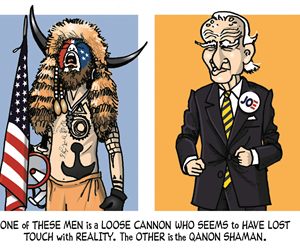 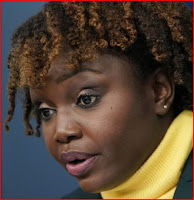 As we all expected, Jen Psaki is out as White House Press Secretary. She’s been kicked in the teeth long enough. It’s not just her. EVERYONE in this position gets the snot kicked out of them dealing with the White House press corps—or at least that’s how the story goes. You take heat for 12-18 months or so and then get your fancy corporate job. Psaki is going to MSNBC which is a lateral move, no different than what she does now. what is shocking is her replacement: Karine Jean-Pierre. She’s the worst. There was chatter that the reason why Psaki stayed on longer was that Karine was just bad dealing with the media. The deputy press secretary bench is like the New York Knicks—abjectly awful. The press is hyping up that she’s the first black lesbian to hold the post. What they’re burying is that she’s an election truther and might not be very friendly to Israel.

Let’s go to the past tweets. Seriously, guys—you didn’t think this would be an issue when or if the time came to elevate her?

What this country REALLY needs are Representatives & senators in both parties to CARE about the people they represent !!

The actual threat posed by a political ‘cult’ in America
Philip Bump - 1h ago   The Washington Post
Speaking in Florida this week at an event focusing on climate change, House Speaker Nancy Pelosi offered the Republican Party both a carrot and a stick.

“I want the Republican Party to take back the party,” the California Democrat continued, mentioning that Republicans used to have a broader range of opinions on abortion and the environment. “Hey, here I am, Nancy Pelosi, saying this country needs a strong Republican Party, and we do.”

“Not a cult,” she added, “but a strong Republican Party.”

The comments sparked criticism from Democrats and Republicans. The former saw her comments as mirroring past Democratic insistences that perhaps the Republican Party would, in fact, revert to some more moderate space, insistences that have not borne out. The latter obviously objected to being disparaged as a cult.

By using that word, however offhandedly, Pelosi singled out something we often end up talking around. The Republican Party’s focus on Donald Trump is intense, if occasionally spotty. Taken in concert with the party’s frequent criticisms of democracy, though, that focus on the former president becomes potentially more problematic.

Sign up for How To Read This Chart, a weekly data newsletter from Philip Bump

In 2017, the World Values Survey Association began conducting another wave of international polling, the latest in an endeavor that began in the 1980s. That included surveying a large group of Americans, posing a range of questions about politics and social issues.

Included in those results was a question about governmental leadership. Among other questions, respondents were asked whether they viewed a country having a strong leader who didn’t have to bother with elections or a legislature was a good or bad thing. Most American respondents said that this would be bad, with more than a third saying it would be very bad.

Interestingly, this varied by age. Younger Americans were more likely to say this would be good than were older Americans, though it was still the case that a majority viewed the idea of an anti-democratic autocrat as a negative. The dividing line appeared to be about age 45.