Thanx to "90 Miles From Tyranny"

Ray Epps’ Pro-Democrat Past Resurfaces As New York Times Comes To His Rescue Epps claims to support Trump, but promoted Hilary Clinton during the 2016 election.  by PAUL AUBERT July 14, 2022 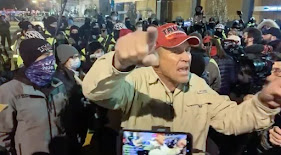 Ray Epps, an alleged Trump supporter who was accused by many to be a federal agent guilty of encouraging Trump supporters to commit illegal acts on January 6th, 2021, was covered by the New York Times on Wednesday.

As National File previously reported, the Times piece attempted to clear Epps of any wrongdoing.

The article alleged he was just an average Trump supporter who has “suffered enormously in the past 10 months as right-wing media figures and Republican politicians have baselessly described him as a covert government agent who helped to instigate the attack on the Capitol last year.”

READ MORE: Meet Ray Epps: The Fedrotected Provocateur Who Appears To Have Led The Very First 1/6 Attack On The U.S. Capitol – Revolver News

Rep. Alexandria Ocasio-Cortez (D-NY) claimed Wednesday evening that U.S. Capitol Police officers or other actors working inside the Capitol building assisted protesters during the January 6 riot as they breached the facility in an effort to stop the certification of the Electoral College vote.

The congresswoman also said that, because the issue is unresolved, she has “never felt safe” at the Capitol. Ocasio-Cortez’s remarks came just hours after a comedian crudely trolled her while she was entering the building.

In a video posted by Pablo Manríquez, a correspondent for Latino Rebels, AOC is heard sounding off to the camera, “…And that there were actual officers working with this? And we never got to the bottom of that, and we never got any answers about that? And to this day, we’re just supposed to pretend that that never happened? I have no idea what happened to the people on the inside, who were very clearly sympathetic with what was going on and opening doors wide open for that, and I’m supposed to sit here and pretend like none of that ever happened?”
Since January 6, 2021, reports have surfaced claiming that officers, in some instances, stood by as Trump-supporting protesters entered the Capitol — though the context for the reports is often unclear. At least one law enforcement officer allegedly posed for a selfie with a protester inside the Capitol.

AOC went on to argue that officers who allegedly helped the protesters must be held “accountable” and that simply throwing taxpayer dollars at the issue would not improve the situation — thus continuing to place employees in the Capitol building at risk.

“And then right afterward, you have a massive, you know, you just have this idea that throwing money at that problem is going to make it go away without any accountability,” she said to the camera. “And so this is, this is where these things are breaking down. We’re not safe. And it’s not just about members of Congress not being safe. The food staff workers aren’t safe. the janitors aren’t safe — like we need to get to the bottom of this.”

The congresswoman also tweeted, “Remember how there was tons of footage and evidence of officers & others inside on 1/6 supporting insurrectionists, but then everyone decided it was too politically risky to investigate thoroughly so they brushed under the rug and now we still have no idea who or what is safe?”
READ MORE
Posted by Pappy at 11:28 PM No comments:

There is NO defense for harassment, It's a form of BULLYING and he's not man enough to do it himself, he urges OTHERS to do it for him...!!

'The Big Sunday Show' guests discuss Transportation Secretary Pete Buttigieg defending the harassment of public officials, saying they should 'never be free from criticism.' #foxnews
Posted by Pappy at 5:03 PM No comments:

`This show is brought to you by Exprs VPN' https://www.expressvpn.com/bongino

It doesn’t appear she’s telling the truth! In this episode, I address why the latest “scandal” surfacing at the January 6th star chamber hearing can’t possibly be true.
Posted by Pappy at 4:41 PM No comments:

Tucker Carlson: This may have been the greatest crime in history Fox News  3 days ago

Fox News host Tucker Carlson argues no one benefited more from the COVID pandemic than China on 'Tucker Carlson Tonight.' #FoxNews #tucker
Posted by Pappy at 9:20 PM No comments:

Tucker: Who is Liz Cheney and what does she stand for?
Fox News  One Year Ago
Tucker Carlson says Democrats don't "parrot the slurs of their enemies." #FoxNews #Tucker
Posted by Pappy at 9:18 PM No comments:

The recent decision by the Supreme Court in NYSRPA V. Bruen lays out clearly the details and requirements needed to uphold a law which may infringe on rights. Modern arms are expressly protected says Justice Thomas in his opinion. — USCCA - https://www.uscca.com/copperjacket

Biden Gets Frozen in His Tracks: "No Constitutional Authority" For His Latest Ridiculous Move

Democrats have infested every corner of our government. Even in the Armed Forces, their anti-Free Speech agenda is cutting people down left and right.

A retired 3-Star general took to Twitter to criticize Jill Biden’s recent claims about women. For that evil crime, the man was suspended from a “mentor” post and is under investigation.

A retired three-star general of the U.S. Army has been suspended from a “mentor” position after sarcastically congratulating first lady Jill Biden for learning “what a woman is.”

The Army confirmed the suspension to Fox News Saturday and confirmed speculation that the veteran was under internal investigation for mocking Biden.

Really? Is the Biden administration so insecure that they have to punish a retired general for making a joke?

This man isn’t currently serving. He was retired, with only a “mentor” position. Yet the Army thought it had the right to cut this man down.

All for what? Mocking someone. That’s it. Last time I checked, jokes are protected speech.

But not to the left. They have long ago abandoned the First Amendment since it got in their way.

Democrats demand complete conformity to their views and agenda (even when those views constantly change). To defy them means you will be canceled, shadow banned, or even attacked.

This general had the “gall” to call out Jill Biden over her defense of Roe. Like other Democrats, who just a few weeks ago refused to define the word “woman,” suddenly she is “standing up” for women’s rights.

That’s worth mocking if anything ever was. So, why should a retired general be scourged for pointing out the obvious?

This is merely another sign that “wokeism” has infested our Armed Forces. Joe Biden appointed leftists to lead the Pentagon.

And they spend more time complaining about gender pronouns than they do defending the country.

The news they are going after a retired general over a tweet? This won’t go well for any of them.
Key Takeaways:
Posted by Pappy at 1:40 PM 1 comment: 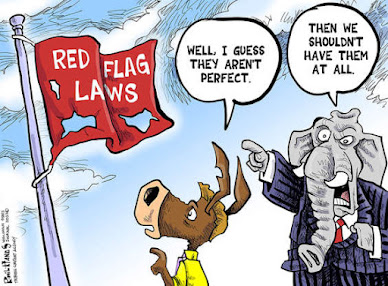 The US is now officially in a recession. BIDENS RECESSION

So what does that mean for the country, why is a recession happening now, and what exactly can we do about it?

In this episode of Making the Argument, Nick Freitas explains how Washington D.C. just plunged America into the worst financial crisis since 2008.

MTA: Making the Argment with Nick Freitas 27: What Is A Recession, Why Is It Happening, And What You Can Do About it?

Consider the logic of the left and it’s no wonder that many people are considering the unspeakable – whether America will devolve into actual violent conflict. But I dare speak about it at length in my brand-new book We’ll Be Back: The Fall and Rise of America, which confronts this issue of systematic political violence head-on. The most important question related to the long decline of America at the hands of a corrupt, incompetent, and terminally foolish ruling caste that controls our major institutions is whether we can pull out of this tailspin without bloodshed.

I sure hope so, but the risk is real and we need to confront it.

The logic of the left accepts political violence. A few years ago, one of its acolytes tried to wipe out the congressional Republican caucus on a softball field; last month, another member of the MSNBCNN target demo tried to off Justice Kavanaugh for somewhat limiting the ability of progressives to conveniently kill babies. Even the reaction to the recent molestation of the famously beer-ophilic jurist as he nibbled on a rib-eye at Morton’s in DC was indicative – this personal confrontation was celebrated by the left instead of decried. What’s the logical limit when you sign onto the idea that one can legitimately influence politics via the personal intimidation of officials placed in office by our agreed constitutional procedures? If you can get in his face, why can’t you slap it? Or put a bullet in it? If there is a boundary, the left is not setting it. Keep in mind that civil conflict is not unknown in America, Our revolution was also a civil war – one sparked by tyrants seeking to enforce gun control. The Civil War that followed four score and change years later was sparked by Democrats angry over the Republican demand that they stopped treating human beings inhumanly – a theme that continues to this day. Prior to the War Between the States was a war between the pro- and anti-slavery militias along the Missouri-Kansas borders. In the late-sixties/early-seventies, there was an urban leftist insurgency by groups like the Weather Underground and the Black Panthers that resulted in hundreds of bombings and many killings. It was dealt with as a law enforcement matter, but in a distinctly militaristic way. The Los Angeles Police Department famously annihilated most of the Symbionese Liberation Army – whose battle cry was “DEATH TO THE FASCIST INSECT!” – in a blazing firefight in South Central that was broadcast on national TV.
But don’t insult our intelligence by referencing the minor fracas that was J6. If that was an insurrection, you would have seen some armed insurrecting instead of selfie-snapping. If red America wanted to start something, they would have brought along their ARs like progressive James Hodgkinson did.

So, while the chance of civil conflict is low, violence is not only possible but it has been used by the left as a means of making political change in America in the past. And the evidence is that the left remains ideologically open to using violence in the future to achieve its goals.
READ HERE
Posted by Pappy at 10:22 PM No comments: