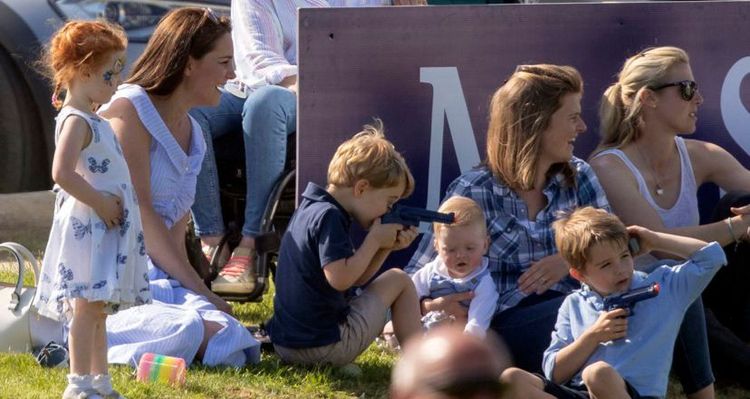 Sometimes we forget that the royal family is still just a regular family. Not necessarily regular in the sense that you'll see them out doing groceries, but those kids are still just kids.
Prince George, Princess Charlotte, and I'm sure Prince Louis in due time, have all been in the media spotlight since they were born. Everyone wants to criticize every action, wardrobe choice, and behavior as though it holds the key to world peace.
But new images that surfaced of Prince George have people even more upset than usual, and this time they might have a legitimate case.
Prince William was playing in a charity game of polo, so Kate Middleton took George and Charlotte to go watch. The prince and princess were having fun playing with all the other kids, and George even had toys to play with.
However, the choice of toys is what got people talking. George was photographed playing with a (OH MY GOD ! ) toy gun, and also apparently had a toy knife and handcuffs with him.
READ MORE

The political war rages on as the approach to the school shooting crisis in our nation is addressed.

Liberals want to blame guns for the decline of mental stability in our youth, while Republicans look to correct underlying causes in the tragic cultural shift that has aided in violence.

Conservative legislators are now stepping up and speaking out against the immorality that has been allowed to plague our country for far too long, contributing to the degradation of our children’s minds.

Governor Matt Bevin, a Republican from Kentucky, spoke on a video hosted by the American Enterprise Institute, defending his position that guns are not the cause of people’s actions.

Bevin was honest and upfront about how it is “naive and premature to talk about gun control”, and put blame more on the culture of our day, saying that thinking a single legislative act is going to solve our problems is “delusional.”

With every school shooting, Democrats looks to push their agenda by taking away the American right to defend ourselves.

The irony is that the legislation they aim for would not have prevented many, if any, of the school shootings, such as the new law after the Florida massacre where they changed the legal age to buy a handgun from 18 to 21. READ MORE
Posted by Pappy at 8:13 PM No comments:

Tags: filthy liars, Philadelphia Soda Tax .......This is James Kenney, Philadelphias "mayor"...He's the one that did a little jig when the supreme court ruled against the Fed. Govt. in the "sanctuary city" case. He (kenney) took the decision as a win over Pres. Trump. Kenney is a SCUMBAG in every sense of the word .....

KENNEY LIED: All The Soda Tax Money Is Being Thrown to City’s General Fund

The Philadelphia City Controller has issued the following statement. I strongly suggest you read every word of this. Very, very carefully. As part of a larger effort…
philadelinquency.com

The Philadelphia City Controller has issued the following statement.   I strongly suggest you read every word of this.
Very, very carefully.

As part of a larger effort to increase transparency and show the public how the City spends taxpayer money, the City Controller’s Office will release information periodically to keep the public informed.  Today, the Office of the City Controller released its first set of information as part of this effort, data on the revenue generated by the Philadelphia Beverage Tax for Fiscal Year 2017 (FY17) and FY18 to-date and the expenditures related to those funds.
The data shows that the majority of revenue generated by the beverage tax is not being spent on Pre-K, Community Schools, and debt service for Rebuilding Community Infrastructure (Rebuild), as originally intended.  According to information recorded in the City of Philadelphia’s general ledger system (FAMIS), about 74% of the nearly $85 million generated by the beverage tax since its inception has gone to the City’s General Fund.
In FY17, the City collected more than $39.5 million, spending 21.2% or about $8.4 million on Pre-K and less than 3%, or $1.2 million, on Community Schools. About 76%, or $30.0 million, of FY17 beverage tax revenue, went to the General Fund.  To-date (as of March 2, 2018) in FY18, the City has collected almost $45.2 million, spending about 25% of funds, or almost $11.3 million, on Pre-K and less than $1 million, or just 2%, on Community Schools.  Almost $33 million, or about 73%, of revenue generated by the beverage tax t0-date for FY18, has gone to the General Fund.  No revenue has been used for Rebuild.

I think history will reflect that today is the worst day in the mayor’s entire political career.

WHY, AFTER A YEAR AND A HALF AFTER TRUMP WAS SWORN IN AS POTUS, SHOULD WE STILL BE EXPLAINING THE WAY OUR ELECTORAL PROCESS WORKS ? ? ? ?


DONALD  TRUMP IS OUR ELECTED PRESIDENT, DEMO-RATS...GET OVER IT ! ! !


How do you judge the success of the Trump economy? Andrew Puzder, former CEO of the parent company of Hardee’s and Carl’s Jr. restaurants says you compare it to Obama's. "Within 15-months, capitalism and President Trump have taken us to an economy where the biggest problem facing businesses is finding workers to fill the good paying jobs that are open."
Read the full transcript of The Daily Signal's interview with Andrew Puzder: https://dailysign.al/2sDRUCf
Posted by Pappy at 4:23 PM No comments: