It has been repeatedly reported on some of our websites that President Barack Hussein Obama is guilty of multiple accounts of treason against the people and Constitution of the United States. He has not been charged with any of his many crimes because he controls the US Attorney General Eric Holder and the Department of Justice (Holder is just as guilty of treason as is Obama). The rest of Congress seems too spineless or fearful to say or do anything about it.

But let someone else try to stand up against Obama’s crime syndicate and he’s the first one to start hollering treason.
It seems that a growing number of state governors are re-establishing State Defense Forces, also known as State Guards, State Military Reserves and State Militias. These forces are under the direct authority of the governor of the state and are not subject to federal control. They can be readily deployed in the case of any natural or man-made disasters.
As of 2010, 23 states and territories have organized State Defense Forces (SDFs) with approximately 14,000 people serving in them. SDFs were established by federal and state law at the very beginning of our country’s history. They have played important roles over the years in helping to defend our nation, however, due to many state budget deficits, SDFs are becoming a thing of the past.
The Heritage Foundation did a report on State Defense Forces back in 2010 and if you want to read more about their history, please click here.
Read More
Posted by Pappy at 9:34 PM No comments:

TAKING THIS WEEKEND OFF TO REPLACE THE FLOOR IN OUR TRAVEL TRAILER........ROTTEN ON BOTH SIDES DUE TO LEAKS. TOO OLD FOR THIS, BUT NO ONE  AVAILABLE TO HELP , SO HERE I GO.....
Posted by Pappy at 9:05 PM No comments:

The Most Incorrigibly Political and America-Bashing President

President Barack Obama has to be the most partisan and most ideological president we've seen in a long, long time. He cannot or will not refrain from injecting his partisan politics into almost every occasion.
Did he go to Mexico last week to improve our relationship with our southern neighbor or to use Mexico, as he does anything else he can find, as a political prop to bash Republicans and as a platform to criticize the United States?
What other American president has so often sidled up to foreign countries on the backs of his own countrymen? Obama's defenders deny, hallucinogenically, that he apologizes for the United States, but our lying eyes keep telling us otherwise.
In Mexico on Friday, Obama, under the guise of who-knows-what, took the opportunity to stump for his latest policy obsession -- gun control -- to an audience that had nothing to do with it, unless you imagine that some of the people there will one day be granted amnesty in the United States by Washington's ruling class and become voters who can pressure know-nothing GOP congressmen to confiscate the people's arms.
Obama didn't just offer a few throwaway lines at the issue, taking playful jabs at his Republican opponents. He actually seemed to be blaming Americans for the corrupt and violent Mexican drug culture.
He said, "Much of the root cause of violence that's been happening here in Mexico, for which so many Mexicans have suffered, is the demand for illegal drugs in the United States."View Full Article
Posted by Pappy at 3:48 PM No comments:

WITH A LITTLE LUCK, SHE WON'T RUN


Clinton: Too much focus on Hillary's future 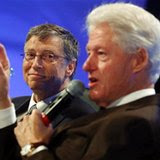 Former President Bill Clinton and Microsoft founder and philanthropist Bill...
WASHINGTON (AP) — Former President Bill Clinton says endless speculation about his wife's political future is a waste of time right now and the nation should be more focused on the "grimy details" of fixing its problems.
"That is the worst expenditure of our time," Clinton said Tuesday at the 2013 Fiscal Summit, where he appeared with Microsoft co-founder Bill Gates, the head of the Bill and Melinda Gates Foundation.
Gates joked that he didn't think his wife, the highly-regarded philanthropist, would run for president. The former president then chimed in, to laughter, "Hillary hasn't mentioned it to me, either."
Clinton said the former Secretary of State and New York senator was taking a role at the Clinton Foundation, writing a book and "having a little fun being a private citizen for the first time in 20 years."
"That's fine but we need to be worried about the work at hand — all of us do," Clinton said. "So whoever the next president is has an easier set of choices before him or her to build America's future."
Clinton said the focus on presidential politics, only a few months after President Barack Obama's re-election last year, "obscures our capacity" to tackle the nation's big problems and "plays to our national tendency to attention deficit disorder when it comes to politics."
———
Posted by Pappy at 3:21 PM No comments:

Email ThisBlogThis!Share to TwitterShare to FacebookShare to Pinterest
Diplomat: US team stopped from going to Benghazi 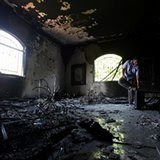 WASHINGTON (AP) — Four members of Army special forces ready to head to Benghazi, Libya, after the deadly assault on the American diplomatic mission had ended were told not to go, according to a     former top diplomat  read story

Achtung, Baby: Are People Being Encouraged to Rat On 'Anti-Government' Neighbors?

Just when you thought the crap couldn’t get any creepier in Obamaland, BOOM, it does and things just got a little bit more … how shall I say it … peculiar. Can we still use the word “peculiar”? We can? Good. Cue Twilight Zone music, por favor, and allow me to proceed.
So, what am I talking about you ask?

The story that hit me sideways hails from my stomping grounds, south Florida. Check it out.
According to Fred Brownbill,


A new $1 million dollar program led by Palm Beach County Sheriff Ric Bradshaw aimed at “violence prevention” is encouraging Floridians to report their neighbors for making hateful comments about the government, a chilling reminder of how dissent is being characterized as an extremist threat.
View Full Article

Obama Lies and Blames Mexican Violence on US Guns

Obama is on another of his blame-America tours, this time in Central and South America, and he continues to blame the US for the rampant v violence ongoing in Mexico. Giving a speech at Mexico’s Anthropology Museum, he blames firearms from the US for the gun violence tearing apart Mexico. President Obama says, “Most of [Continue Reading...]
Posted by Pappy at 7:52 PM No comments:

“FBI Most Wanted Terrorists”…30 Muslims and 2 Progressive Liberals. Funny but NO Right-Wing Patriots


http://dcclothesline.com/2013/05/04/fbi-most-wanted-terrorists-30-muslims-and-2-progressive-liberals-no-right-wing-patriots/
Posted by Pappy at 7:46 PM No comments: