Not even the most staunch democrats can agree with this. I’m not talking about liberals

READ MORE
Posted by Pappy at 11:42 PM No comments:

Email ThisBlogThis!Share to TwitterShare to FacebookShare to Pinterest
Conservatives Want Trump to Be Trump 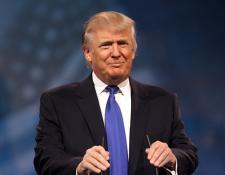 A majority of conservatives want President Trump to continue expressing his own views in his own way, according to a poll by FedUp PAC.Trump recently received broad criticism for using, in a private meeting, what Trump himself described as “tough” language about nations where living conditions are so intolerable that many of their people want to leave and come to the United States.  Even... Read More >
Posted by Pappy at 8:51 PM No comments:

Robert Mueller is used to getting universal praise for his professionalism and expertise. In reality, he's an incompetent, arrogant and out-of-his depth crony who despises his employees, the Constitution, and the American people.

His career is littered with mistakes. Now, as he teeters on the brink of falling into the Clinton/Russia abyss, he's trying to take Donald Trump with him.

It won't work. But just look at how he's breaching the 4th Amendment!

FULL STORY
Posted by Pappy at 8:44 PM No comments:

Against a newly discovered likelihood the Robert Mueller investigation began under false pretenses; and against the backdrop that FBI surveillance and wiretaps were obtained through materially (intentionally) false representations to the FISA court; and against the backdrop the original Flynn plea judge (Contrereas) was also the approving FISA judge; and that judge ‘was summarily recused’ from the case; and against increasing evidence that Mike Flynn was set up by a terminal animus, and politically-motivated investigative rogue unit, operating within the FBI; and against surfacing IG Horowitz evidence that FBI investigators manipulated (lied on) their FD-302 interrogation documents; and understanding those falsified 302’s were used in the Mueller/Flynn charging document…
…Special Counsel Robert Mueller now asks for postponement of sentencing:

(pdf link)
Both parties did not ‘request‘ a postponement; both parties ‘agreed‘ to a postponement.  The motive for the request (Mueller) is entirely divergent from, yet complimentary to, the motive to agree to the request (Flynn).
This is all beginning to go backwards.
It is not coincidental that Brandon L Van Grack is the signatory to the delay request by Special Counsel Robert Mueller’s request to the new Judge, Emmet G Sullivan.
If, as has been reported, Inspector General Michael Horowitz now has evidence the FBI manipulated their FD-302 (interrogation and questioning) documents, as also admitted by FBI agent Peter Strzok in related matters regarding Clinton…

…. and those manipulated or falsified FBI 302’s (containing FBI investigative notes of Michael Flynn’s questioning during the January 2017 interview), were used in the actual Flynn charging documents.
View this document on Scribd
Well, then the underlying evidence presented to the initial judge, Ruben Contreras, in the December 1st plea hearing, were materially misrepresented.
With the IG exposing falsified and manipulative investigative practices by the FBI, Mueller would have no alternative but to throw the brakes on.  This whole thing is turning into a sh*t-show of epic proportions. EARLIER WE DISCUSSED
The Robert Mueller lawyer, the Special Counsel attorney that signed General Flynn’s Statement of Offense filed in U.S, District Court 12/1/2017 was “Brandon L Van Grack”. [See page #5]

When Trump transition team lawyer Kory Langhofer (Trump for America transition organization) contacted the special counsels office about the illegal and unethical way they retrieved transition team emails from the GSA. Who was he put in contact with? 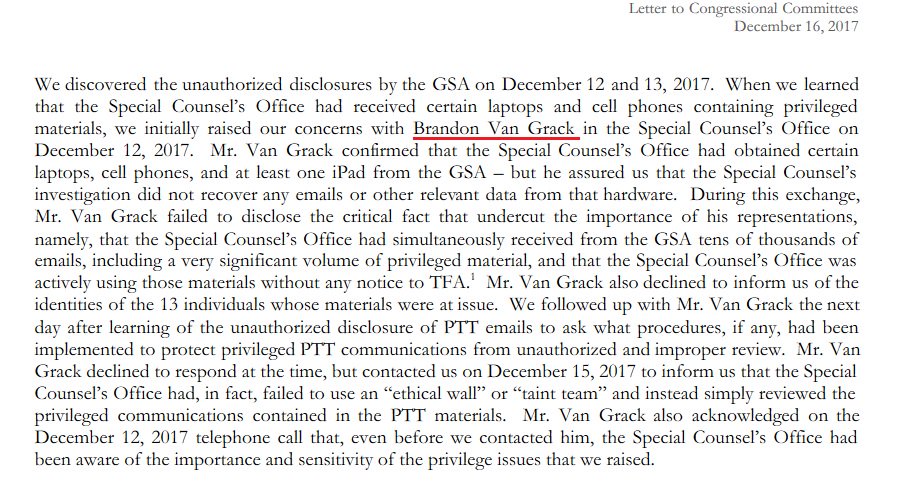 It was Brandon L Van Grack who was in communication w/ the Trump for America transition organization; and, according to the documents on this topic (attached), misrepresented (ie. lied about) the Special Counsel access to the GSA emails on 12/12/2017. (Pdf Link)
Questions: A) What reason would Van Grack have for taking the call from the transition attorney in the first place? and then, B) what reason would he have for lying about the information that was requested?
It is my belief, based on mounting evidence, a specific cast of characters -within the Mueller “Russia Election Interference” probe- were placed there to protect the people behind the FBI’s 2016 counterintelligence operation against Trump.
I suspect the same FBI and DOJ “small group”, the team who worked diligently to ensure Hillary Clinton was never found culpable in the 2015/2016 email investigation, later worked on the 2016 Trump counterintelligence operation (FISA wiretapping surveillance etc).
That same “small group” within the FBI and DOJ were then given the task in 2017 of covering both prior operations: A) *Clear Hillary Clinton, and B) *Counterintel op on Trump.
To cover, cloud and protect the DOJ and FBI officials engaged in both operations, the “small group” is now assembled within Robert Mueller’s Special Counsel team.
Inside Mueller’s crew, the “small group” essentially works to watch over what information the Trump officials or congress could possibly be discovering…. under the auspices of investigating ‘Muh Russia’ etc.
If the “small group” comes across a risky trail being followed, they work to impede, block, delay or deflect anyone from that trail.
That’s why the Special Counsel attorney that signed General Flynn’s Statement of Offense filed Dec. 1, 2017, was the same attorney who responded to the Trump transition team inquiry. Brandon L Van Grack.
This “small group” are essentially career DOJ and FBI staff lawyers behind and beside the visible names we have recently become aware of: Peter Strzok, Bruce Ohr, Lisa Page, Bill Priestap, Andrew McCabe, Sally Yates, James Baker etc.

Pelosi Sends Letter to Speaker Ryan Calling for Removal of Chairman Nunes and End to House Republicans’ Partisan Charade
Washington, D.C. – Today, Democratic Leader Nancy Pelosi sent a letter to Speaker Paul Ryan demanding the removal of House Intelligence Chairman Devin Nunes after it was revealed that he altered the contents of a reckless, partisan memo released to the White House after it had already been voted on by the Committee and presented to House Members.  Chairman Nunes’ action is a violation of House rules and is part of a partisan pattern to discredit the investigations into the Trump-Russia scandal.  Both the Department of Justice and Federal Bureau of Investigation have warned against the release of Nunes’ memo, stating grave concerns about the accuracy of the memo and its misrepresentation of classified information.
Leader Pelosi wrote, “Chairman Nunes’ deliberately dishonest actions make him unfit to serve as Chairman, and he must be immediately removed from this position… House Republicans’ pattern of obstruction and cover-up to hide the truth about the Trump-Russia scandal represents a threat to our intelligence and our national security… It is long overdue that you, as Speaker, put an end to this charade and hold Chairman Nunes and all Congressional Republicans accountable to the oath they have taken to support and defend the Constitution, and protect the American people.”

Full text of the letter can be found below:

Speaker of the House

The decision of Chairman Nunes and House Republicans to release a bogus memo has taken the GOP’s cover-up campaign to a new, completely unacceptable extreme.

Both the DOJ and FBI oppose releasing the Nunes memo. As the Department of Justice warned, the public release of the memo would be an “unprecedented action” and “extraordinarily reckless.” The FBI also expressed that the agency has “grave concerns about material omissions of fact that fundamentally impact the memo’s accuracy.”

It has now come to our attention that Congressman Nunes deliberately and materially altered the contents of the memo since it was voted on by the House Republicans. This action is not only dangerous, it is illegitimate, and violates House rules.

Congressman Nunes’ deliberately dishonest actions make him unfit to serve as Chairman, and he must be removed immediately from this position.

House Republicans’ pattern of obstruction and cover-up to hide the truth about the Trump-Russia scandal represents a threat to our intelligence and our national security. The GOP has led a partisan effort to distort intelligence and discredit the U.S. law enforcement and intelligence communities.

It is long overdue that you, as Speaker, put an end to this charade and hold Congressman Nunes and all Congressional Republicans accountable to the oath they have taken to support and defend the Constitution, and protect the American people.

The integrity of the House is at stake. We look forward to your immediate action on this subject.

Democratic Leader
Posted by Pappy at 7:34 PM No comments:

If we don't see this "memo" now that it's been so highly publicized, how can we ever TRUST the FBI or the DOJ again ? Can either agency ever be trusted again ? According to one that has read it, the only thing "secret" on the paper is a name...that could easily be blocked out. So...Whats the problem ? Looks to me like the problem is that the FBI, CIA,IRS and DOJ etc. have gone unchecked for way, way too long.....


House Intel votes to release controversial surveillance memo to the public   Fox News The vote was announced to reporters by California Rep. Adam Schiff, the top Democrat on the committee, who called it a “very sad day, I think, in the history of this committee.” The motion passed on a party-line basis, he said.


President Trump now has five days to decide whether he has any objections before the memo
can be publicly released.

READ MORE
Posted by Pappy at 8:59 PM No comments: