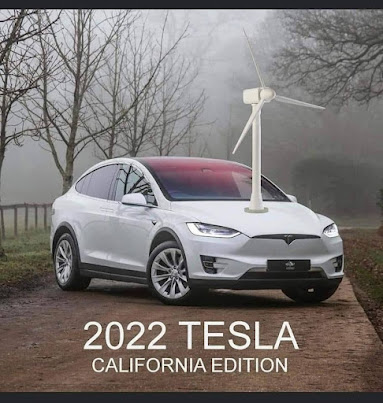 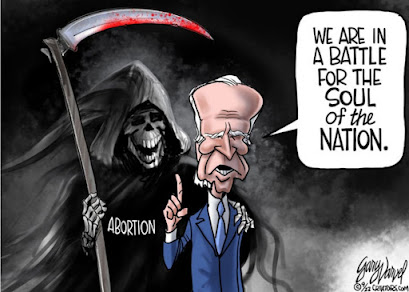 Email ThisBlogThis!Share to TwitterShare to FacebookShare to Pinterest
to quote" the United States of America has become a crime scene"
Homeland Security
I know generally some of us don’t have an appetite for politics, but this exchange is an incredible indictment of what is going on with our borders.
My apologies but this will not be seen on NBC, ABC, CBS, CNN, MSNBC etc. I don’t think it was seen on Fox either.
Posted by Pappy at 8:12 PM No comments:

'Tucker Carlson Tonight' host reacts to President Biden's divisive speech and his attack on 'MAGA Republicans.'
Posted by Pappy at 10:20 PM No comments:

NewsGlobal.com)- The U.S. Army Corps of Engineers will not provide a permit for a 5K memorial run honoring Jan. 6 defendant Matthew Perna to cross the Shenango Dam near Sharpsville, Pennsylvania, citing “security concerns” and the appearance of endorsing a political event in an election year.

After a 14-month battle with federal prosecutors, Perna committed suicide on Feb. 25, 2022.

“Talk about kicking us when we’re down,” she lamented.

Sharpsville agreed to host the race after the Corps of Engineers rejected it. “We’re grateful that our race will go as planned in Sharpsville,” she said.

Perna said that Matt’s group conceived the race at his burial. “It’s not political,” she said.

She wants to promote suicide prevention and mental disease awareness.
READ MORE
Posted by Pappy at 9:33 PM No comments:

Representative Marjorie Taylor Greene called on President Biden to be impeached following his speech Thursday night in which he vilified “MAGA Republicans” as extremists and a “threat to this country.”

“Joe Biden just declared all of us enemies of the state. Biden is a danger to us all,” she tweeted from her official account. “Joe Biden must be impeached!”

Greene was incensed over the President’s remarks, posting various tweets in which she mocked Biden as “President Butterbeans” and compared the speech – including the blood red lighting behind him – to that of Hitler.

“They chose this imagery. It’s unreal,” she seethed. “Joe Biden is Hitler.” 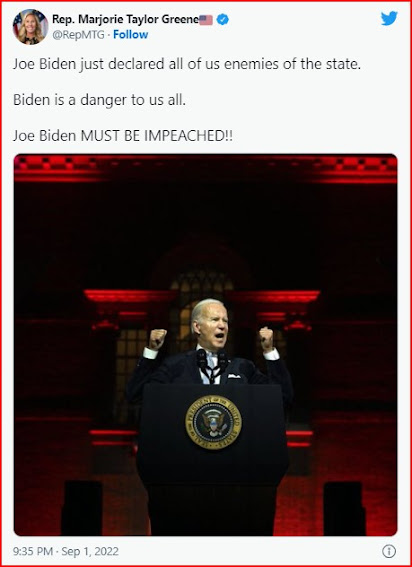 Republicans Are Getting Worried About Midterms

(NewsGlobal.com)- There was a time not too long ago when it seemed all but a certainty that the Republican Party wouldn’t just make significant gains in this year’s midterm elections, but they would likely regain the majorities of both the House and Senate.

Recently, though, the tides seem to have changed, thanks to a number of different events that have happened, including the ongoing and escalating potential legal threats that former President Donald Trump is facing

Recently, though, the tides seem to have changed, thanks to a number of different events that have happened, including the ongoing and escalating potential legal threats that former President Donald Trump is facing.

While Democrats are battling against out-of-control inflation and rising prices as a result, as well as many failures of President Joe Biden and his administration, they are receiving the benefit of Republicans having to deal with Trump’s legal exposure.

As The New York Times reported, many Republicans who appeared on weekend news shows last week didn’t defend Trump in the latest charade. Those who did decide to defend him indicated to the media outlets that they’d like to talk about something else.

Those interviews came only a few days after the redacted version of the affidavit that justified the FBI’s search of Trump’s estate at Mar-a-Lago showed that the former president had kept with him highly classified material. Some of that related to the use of “clandestine human sources” in intelligence gathering, as The Times reported.

The members of the GOP who were willing to speak of the entire ordeal were very quick to try to shift the focus. Missouri Senator Roy Blunt, for example, said that Trump “should have turned the documents over” when they were requested of him. But, he added on his appearance on ABC:

“What I wonder about is why this could go on for almost two years and, less than 100 days before the election, suddenly we’re talking about this rather than the economy or inflation or even the student loan program.”

Blunt certainly has a point there, but the fact is that the country is talking about this now because it’s what’s right in front of them. The FBI allegedly found many classified documents at Trump’s estate, and it’s not just a problem for the former president; it’s proving to be a headache, at the very least, for members of the GOP who are looking to win seats in Congress come November.

Some Republicans are very concerned that Trump’s ongoing legal issues are going to have a big negative effect on the GOP’s chances to regain control of at least one chamber of Congress come November — as well as other major gubernatorial elections around the country.

One of those people is New Hampshire Governor Chris Sununu, who said while appearing on CNN:

“Former President Trump has been out of office for going on two years now. You think this is a coincidence just happening a few months before the midterm elections?”

Democrats haven’t done much right in those nearly two years, as many voters would have responded just a few months ago. Now, though, it’s very possible their thoughts have changed, thanks to the former leader of the GOP facing mounting legal troubles that have been suspiciously timed by liberal leaders.
Posted by Pappy at 7:51 PM No comments:

From a "Southern Lady", A staunch Republican, Involved in politics for quite some time, actually a cousin of mine.

It’s interesting that Hillary and Democrats called Trump’s presidency illegitimate right from the start, now they accuse him of not respecting the results of an election.
The Resist movement created violence and destroyed property. Several police officers died in some of those confrontations with Antifa. The left attacked Christians and even called the Rosary evil.
If you dare disagree with them in anyway, you will get screamed at and called transphobic, Fascist, homophobic, racist, deplorable( my personal favorite) etc.
The accusations about Jan6 do not include the presence of Antifa types seen in full view as they unloaded from a bus. They don’t ask why Nancy refused to have the National Guard, and why she had all communications from her phone and the Capital police deleted. I had friends there, they say something very different than what is reported.
I know there was a small group of Trump supporters that broke into the building, they are in jail, but what about the video of an unknown male handing out weapons to a crowd of non Trump supporters and giving them the orders to “ go inside”? There’s video of the doors being opened and people being invited in, video of people being led to the upstairs. That will never be investigated. Videos of stacks of “ mail in” ballots that have never been folded, videos of numerous dumps of ballots in the shut down states, And a refusal by the counties where ballots were challenged, to allow audits.
Now the raid of a former President’s home for doing something every other President has done. Hillary had a server that she openly destroyed along with other evidence, nothing happened to her. Now Biden calls “Make America Great Again” hate speech and Republicans are a threat to Democracy.
If you have been involved with any Republican organizations, you can expect the newly armed IRS to knock on your door! Why did he arm them?
Until regular people suffer enough, they will not get involved. Biden’s first act was to make us dependent on foreign oil. We are headed toward winter without enough energy. Biden will be fine at the White House and his fabulous plane will fly him wherever he wants to go. He has been in DC his entire life and has no idea how regular people live. He has been charged twice with plagiarism, he finished almost last in his class and constantly tells totally made up tales. His family does business with China, his daughter admits taking showers with him and blames her sex addiction on that, and Hunter’s laptop had pics of him doing horrible things.
I’m actually afraid of my own government now, The FBI and CIA covered for Hillary and are fine with raiding Trump’s home.
Main stream media covers for Democrats totally. We are already very much like Russia, all power to the government and punishment for those that speak out.
Maybe hunger and cold will wake some people up, maybe not. The people coming here to escape Socialism will want to leave in a few years to find freedom they thought was here. They are just pawns. At some point we will not be able to support this invasion. Biden has never understood economics, that should be obvious to everyone at this point, he has lived a life of privilege and sells his connections to foreign countries.
He is a King who only cares about his subjects to keep him in power, he tells them what they want to hear and hides in his palace by the sea with armed guards protecting him.
All great societies fail at some point because of the very things we see now.
Posted by Pappy at 4:14 PM No comments: 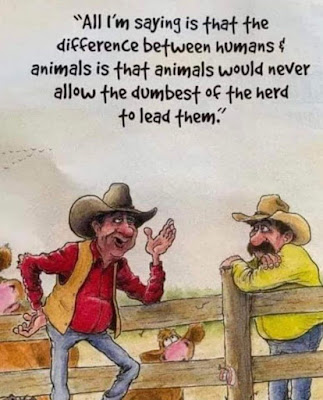 Email ThisBlogThis!Share to TwitterShare to FacebookShare to Pinterest
Posted by Pappy at 3:28 PM No comments:

Trump Has Perfect Response To Biden’s ‘Enemies of the State’ Speech Attacking MAGA Republicans: ‘He Must Be Insane’  BY RUSTY WEISS SEPTEMBER 2, 2022

Former President Donald Trump responded to Joe Biden’s speech Thursday night in which he vilified “MAGA Republicans” as extremists and a “threat to this counBiden’s speech had all the elements of an authoritarian production as he continued to divide the nation by portraying Republican voters who support Trump as a “clear and present danger” to “democracy.”
The speech, delivered by a bitter, bitter man, used the phrase “MAGA Republicans” or some variant over a dozen times, was delivered on a set bathed in blood red lighting, and featured a backdrop of Marines standing guard just hours after he taunted Second Amendment advocates for not having the firepower to take on the federal government.

“Donald Trump and the MAGA Republicans represent an extremism that threatens the very foundations of our republic,” Biden claimed.

He added, “There is no question that the Republican Party today is dominated, driven, and intimidated by Donald Trump and the MAGA Republicans, and that is a threat to this country.”

It is one of the most divisive speeches you will ever hear from an American President. And it was embarrassing.
TWEET

NBC News @NBCNews
"Too much of what's happening in our country today is not normal. Donald Trump and the MAGA Republicans represent an extremism that threatens the very foundations of our republic," President Biden says.
Sept. 1st 2022
Posted by Pappy at 3:20 PM No comments: