The Silence is Deafening

Sieg Heil!
Addressed to consumers of the MSM:
Did you know that yesterday—Thursday, February 28, 2013—an estimated 10,000—ten thousand—people gathered at the capitol building in Albany, NY to protest New York’s aggressively anti-second amendment “S.A.F.E. Act”?
Did you hear this on the national news?
Do you know that that ten thousand figure is the same estimated size of the “Occupy Wall Street” mob at the height of its anarchic reign in New York City*?
Did you ever hear about “Occupy Wall Street” on the national news?
Yesterday, after a day-long protest by these estimated 10,000 people, there was not a single arrest, not a single bit of trash left on the premises, not a single disturbance to either law enforcement, citizens, or the environment (just like every T.E.A. Party protest of 2009).
Occupy Wall Street, on the other hand, resulted in drug use, theft, vandalism, harassment, sexual harassment, child harassment, terrorizing local businesses, child abuse, assaults, rapes, arson, murder, public nudity, public sex, public defecation (on police cars, in businesses, in public areas, and on private property), numerous arrests, total trashing of the environment, disease, and God knows what else.
Yet whereas the national news ensured that “Occupy Wall Street” became a household name, no one outside of Albany listening solely to the MSM would have any idea that there is an insurrection brewing against the aggressive gun control laws being pushed by Democratic operatives the nation over, beginning in New York State.
Ok you MSM consumers: You are no doubt familiar with the “We are the 99%!” chant. But are you familiar with “We will not comply!”?
I didn’t think so.
All so very strange, isn’t it?

We will not comply
(For more pictures, see here.)
Posted by Pappy at 7:02 PM No comments:

WOMEN TAKE BIDENS ADVICEAND BUY SHOTGUNS FOR SELF DEFENSE
Posted by Pappy at 2:39 PM No comments:

Email ThisBlogThis!Share to TwitterShare to FacebookShare to Pinterest
Labels: SHOTGUNS

They try to say S S is an entitlement, and I get angry when they do this but........it's true , S S is an entitlement, WE PAID IN TO S. S. ALL OUR WORKING LIVES, it's our money so we ARE ENTITLED TO THOSE FUNDS. We are told that S S is going broke, but the Gov. has "borrowed" 2.7 trillion dollars from thhe fund and replaced it with "worthless" non marketable securities. None of this has been "paid back"..............

From Wikipedia, the free encyclopedia
In the United States, the Social Security Trust Fund is a fund operated by the Social Security Administration into which are paid payroll tax contributions from workers and employers under the Social Security system and out of which benefit payments are made to retirees, survivors, and the disabled, and for general administrative expenses. The fund also earns interest. There technically are two component funds, the Old-Age and Survivors Insurance (OASI) and Disability Insurance (DI) Trust Funds, referred to collectively as the OASDI funds.
When program revenues exceed payments (i.e., the program is in surplus) the extra funds are borrowed and used by the government for other purposes, but a legal obligation to program recipients is created to the extent this occurs. These surpluses add to the Trust Fund. At the end of 2011, the Trust Fund contained (or alternatively, was owed) $2.7 trillion, up $69 billion from 2010.[1] The fund is required by law to be invested in non-marketable securities issued and guaranteed by the "full faith and credit" of the federal government.
The trust fund represents a legal obligation to Social Security program recipients and is considered "intra-governmental" debt, a component of the "public" or "national" debt. As of April 2012, the intragovernmental debt was $4.8 trillion of the $15.7 trillion national debt.[2]
According to the Social Security Trustees, who oversee the program and report on its financial condition, program costs are expected to exceed non-interest income from 2011 onward. However, due to interest (earned at a 4.4% rate in 2011) the program will run an overall surplus that adds to the fund through the end of 2021. Under current law, the securities in the fund represent a legal obligation the government must honor when program revenues are no longer sufficient to fully fund benefit payments. However, when the trust fund is used to cover program deficits in a given year, the Trust Fund balance is reduced. By 2033, the fund is expected to be exhausted. Thereafter, payroll taxes are projected to only cover approximately 75% of program obligations.[3]
There is controversy regarding whether the U.S. government will be able to borrow sufficient amounts to honor its obligations fully to recipients or whether program modifications are required. This is a challenge for the Federal government overall, not just the Social Security program.[The balance of this article can be read by searching "social security trust fund" in Wikipedia]
Posted by Pappy at 12:32 PM No comments:

By: Patrick J. Buchanan
Eight days after the massacre of 20 first-graders at Sandy Hook Elementary, where each child was shot with a Bushmaster .223, The Nation’s Gun Show, the biggest east of the Mississippi, opened.
“A line already snaked around the building shortly after the three-day event began at 3 p.m., and the parking lot was jammed” at the Dulles Expo Center in Chantilly, Va., wrote Justin Jouvenal of The Washington Post:
“With an AK-47 slung over one shoulder, Marco Hernandez offered one word when asked why he was in the overflow crowd at the gun show.”
“Obama,” he said. “I wouldn’t be here if it weren’t for the possible gun ban.”
And this is the story across America since Sandy Hook.
The weapon most in demand at Chantilly?
The AR-15 black rifle, a version of which was used to slaughter the innocents in Newtown. At Chantilly, their price doubled in hours to $1,800. Gun stores have sold out their inventor
Yet for weeks after Sandy Hook, journalists and politicians from the president to Mayor Michael Bloomberg, who were making the case for a new assault weapons ban, dominated the airwaves. Those calling for reinstatement of the ban that was in effect from 1994 to 2004 had the national audience almost entirely to themselves.
The National Rifle Association was largely silent. Not until nine days after Newtown did the NRA’s Wayne LaPierre appear on “Meet the Press” to be subjected to hostile interrogation.
Yet, from the record gun sales in December, and 2012 — there were 16.8 million calls to the FBI for background checks for gun purchases last year — the elites have lost the argument with the audience that counts. They have failed to convince those who buy guns.
Just as East Berliners, before the Wall was built, voted with their feet, fleeing west, Americans are voting with their checkbooks, paying hundreds and thousands of dollars to buy the guns liberals loathe.
The reflexive response of the gun controllers is to blame this on that malevolent force, the gun lobby, at whose apex is the NRA.
But those crowds coming to gun shows in droves and buying semi-automatics are not there because the NRA issued some order.
Today, we Americans are a far more heavily armed people than half a century ago. Forty-seven percent of adult males own a firearm. There are 270 million rifles, shotguns and pistols in private hands.
Are they for hunting? Not according to the Financial Times.
“The number of hunters fell from 16.6 million in 1975 to 12.5 million in 2006, according to the U.S. Fish & Wildlife Service.” That number will continue to shrink as America’s suburbs further encroach on rural areas, limiting hunting grounds and reducing game.
The FT notes that Freedom Group, owner of Bushmaster, has estimated that while “total sales of long guns to U.S. consumers rose at an annual rate of just 3 percent during 2007-2011, modern sporting rifles grew at an annual rate of 27 percent.” Last year, sporting rifle sales doubled.
The number of rifles like the AR-15 in private hands has probably tripled since the assault weapons ban expired. The NRA’s David Keene estimates the number now at above 3 million.
Who owns these weapons?
Half are owned by veterans and cops. Writes Keene: “Nearly 90 percent of those who own an AR-15 use it for recreational target shooting; 51 percent of AR owners are members of shooting clubs and visit the range regularly; the typical AR owner is not a crazed teenage psychopath, but a 35-plus-year-old, married and has some college education.”
These figures suggest that a successful effort to restrict the sale and transfer of “assault rifles” will, as did the Volstead Act and Prohibition, drive the market underground, create lawbreakers out of folks who are law-abiding and send the AR-15 price further skyward.
Many gun controllers not only do not understand what motivates those who disagree with them, they do not like them, reflexively calling them gun nuts, a reaction as foolish as it is arrogant and bigoted.
For given the loosening of gun laws at the state level in recent years, the gun controllers no longer have the numbers to impose their will on the folks who have a love for, or feel a need for, guns.
To most Americans, an armed guard in a school is a good idea in our too-violent nation. Most Americans realize that when shooting breaks out in a gun-free zone — a school, movie theater, mall — the first call goes to 911 to get cops with Glocks and a SWAT team with black rifles there as soon as possible.
Most folks understand why air marshals on planes might have to be armed. Most folks know that the people running up the death toll in murder capitals like Chicago are not using AR-15s. And many Americans yet accept that in the last analysis it is a man’s duty to be the defender and protector of his wife and children.
Human nature will ultimately triumph over ideology.
Posted by Pappy at 9:10 PM No comments:

SOME STATISTICS ON DEATH IN THE U S 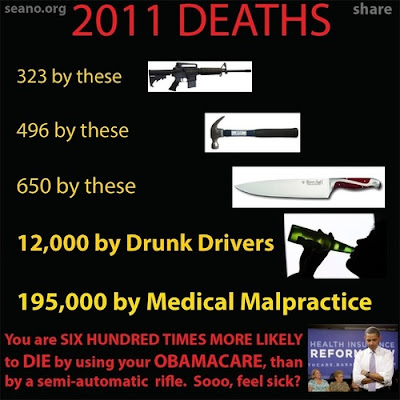 Email ThisBlogThis!Share to TwitterShare to FacebookShare to Pinterest
Labels: DEATHS BY THE NUMBERS 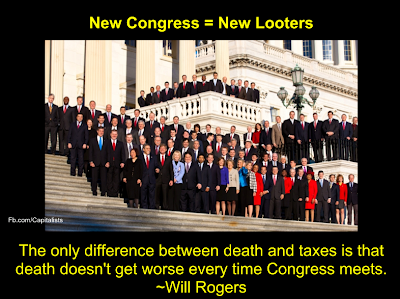 Over the past few months, I have been completely overwhelmed with what happened at Sandy Hook School. After the initial reports came out, I was thinking to myself, "did this really happen "? The more I thought of it, and the more I checked into it, the more I convinced myself that either it never happened or the government is/was involved in it in some way.
There are so many discrepancies, so many contradicting stories, so much left untold and evidence unreleased that I don't see how anyone can't question what happened................. For just a few examples....how many guns ....which guns were used....who owned the car Adam Lanza drove to school....a teachers car in the parking lot full of bullet holes, no one heard that....where is the video surveilance from the "brand new" video system....where are pictures of the rest of the 300-400 children leaving school....who were the two nuns pictured outside the school that look like they have I D badges hung around thier necks, what were they doing there....three men in woods behind school, one taken in handcuffs?....strange interview of the coroner, as though he had no clue as to what was going on....Attorney General Holder meeting with the governor of connecticut two weeks before the shooting....An emergency drill going on the same day and time at a school 20-30 miles from Sandy Hook and one nearby in N Y ....[these drills were run by DHS] coincidence ??.....I could go on, but by now I'm sure you get the idea.

My question is this, will we ever find what really happened or are the Police and government agencies waiting for people to forget,  for this to no longer be urgent, for all of it to blow over ? Change the focus to gun control, everyone will be so angry, they will comletely forget Sandy Hook.

Email ThisBlogThis!Share to TwitterShare to FacebookShare to Pinterest
Labels: polititions