AND....She is still governor and still walking around FREE 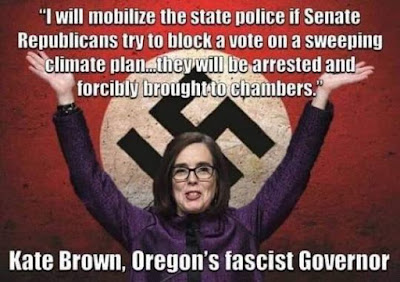 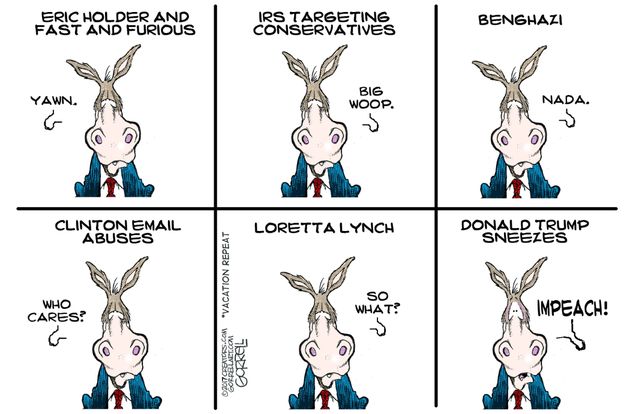 In a new book, advice columnist E. Jean Carroll claims Donald Trump raped her in a dressing room stall nearly 25 years ago. As soon as she made her claim, the Democrat media complex jumped all over the story and gave it credibility.

President Trump immediately outright denied the accusation.
"Shame on those who make up false stories of assault to try to get publicity for themselves, or sell a book, or carry out a political agenda—like Julie Swetnick who falsely accused Justice Brett Kavanaugh. It’s just as bad for people to believe it, particularly when there is zero evidence. Worse still for a dying publication to try to prop itself up by peddling fake news—it’s an epidemic,"

Email ThisBlogThis!Share to TwitterShare to FacebookShare to Pinterest
READ ON
Posted by Pappy at 9:32 PM No comments:


Why does President Trump keep having to replace his appointees...?? Could it be the amount of harassment they get from the Dems and they decide it's JUST NOT WORTH IT...!! The Democrats want to investigate    Trump and everyone who works for and with him....

READ ARTICLE
Posted by Pappy at 9:15 PM No comments:

I'd like to know, how many of the critics condemning these facilities have actually SEEN them ??? They are bad because.....TRUMP..!!


Border Patrol on Tuesday returned 100 migrant children to an overcrowded facility in Clint, Texas, which lawyers have recently denounced for its "inhumane" conditions, a Customs and Border Protection (CBP) official told CBS News.

The Border Patrol facility, located in the outskirts of El Paso, has come under scrutiny after independent monitors reported learning of unsanitary, crowded living conditions for as many as 350 detained minors.

According to the attorneys who inspected the facility, older children were taking care of the younger ones. Some young mothers had to wear clothes stained with breast milk. The children also did not have access to soap and toothbrushes, and most had not showered since they crossed the southern border.

"It is degrading and inhumane and shouldn't be happening in America," Elora Mukherjee, one of the lawyers told CBS News Monday. "The children had not had access to a single shower or bath, they were wearing the same dirty clothing they crossed the border with.

Border Patrol, which is overseen by CBP, came under widespread pressure to transfer the young detainees into the care of the Office of Refugee Resettlement (ORR), an agency within the Department of Health and Human Services (HHS) responsible for the care of unaccompanied migrant minors in U.S. custody. These children usually remain in HHS custody until a sponsor is found for them.

Border Patrol officers, who are typically the first ones to encounter migrants near the border, are supposed to transfer unaccompanied minors to HHS within three days. Its facilities — like the one in Clint — are not designed to house children.

ORR confirmed to CBS News on Tuesday that 249 of the roughly 350 children held at Clint were moved to its facilities. However, the other children were transferred to other Border Patrol facilities, before ultimately being sent back.

CBS News asked Border Patrol why the children were returned. The agency has not yet responded, but said more details may be coming.

In recent weeks, HHS has been warning that it is running out of bed space and funds to properly take care of migrant children. The agency is asking for $2.88 billion in emergency funding to increase capacity in children shelters.

An HHS official said the agency is facing a "spike" in referrals of unaccompanied minors, with more than 52,000 children transferred to ORR custody this fiscal year.

Earlier this month, citing a "tremendous strain" on the agency, the department moved to shut down all educational, recreational and legal services offered to migrant children in U.S. custody.

The move is expected to end legal assistance, ESL classes, soccer games and other activities. HHS is also preparing to open a new shelter in south Texas and is inspecting several military bases to potentially house more children.
Posted by Pappy at 8:09 PM No comments:

One of the Russian Navy’s most advanced warships has docked at a port in Havana’s harbor.

Armed with cruise missiles, air deference systems and other weapons, the Admiral Gorshkov -- which pulled into Cuba's capital Monday -- is the first ship in a new class of frigates intended to replace aging Soviet-era destroyers to project power far away from Russian shores.

It is accompanied by the multifunctional logistics vessel Elbrus, the medium sea tanker Kama and the rescue tug Nikolai Chiker, the Russian Navy says.

The naval group was greeted with a 21-gun salute from Cuban forces stationed at the entrance to the Bay of Havana. The Gorshkov -- which entered service last year -- responded with its own salute.

As U.S.-Russian relations have sunk to some of the lowest levels since the Cold War, Moscow has been considering further steps to boost its global presence. An air base and a naval facility in Syria are currently Russia's only military outposts outside the former Soviet Union but Russian military officials have talked repeatedly about plans to negotiate deals for Russian warships and aircraft to use foreign ports and air bases.

Russia's armed forces have received hundreds of new warplanes and dozens of warships in recent years as part of a sweeping military modernization program.

The Admiral Gorshov -- following its stop in Cuba -- is scheduled to make calls at several more Caribbean ports, Russia's Navy said, without elaborating.

Joe Biden is calling for legislation to compel Americans to use guns that recognize DNA and fingerprints. There's just one problem. They don't exist in real life.  Biden appears to be describing a combination of two fictional guns reported in, of all places, the Kremlin-controlled "Russia Today." And the Stallone movie, "Judge Dredd." Weird. READ MORE

NBC News anchor Chuck Todd grilled President Donald Trump over the mistreatment of migrant children at the southern border, asking him, “Why aren’t you doing something?”
Todd’s exclusive interview with Trump aired on Sunday morning’s edition of NBC News’ Meet the Press, and included an exchange about the most recent reporting on deplorable conditions for migrant children at the southern border.
While Todd repeatedly pressed Trump about his administration’s failure to care for the children humanely, he also allowed several Trump falsehoods to go unchallenged.
“I want to ask what’s going down with the, these, the children in these migrant camps,” Todd said. “The stories are horrible, Mr. President. You have children without their parents. You have kids taking care of kids.”
“You’ve, you’ve read these reports,” Todd continued, as Trump agreed, “I know people are coming to you. I know you think this is the Democrats’ problem.”
As Trump began to answer, Todd said “Forget it! Why aren’t you doing something? “They’re in terrible shape down there, Mr. President. Down in Homestead, Florida, that’s where I grew up, it’s, the conditions are terrible.”
READ ON
Posted by Pappy at 12:59 PM No comments:

‎Ken Raymond‎ to Black History, the GOP, and a Conversation

On this day in history, June 24, 1924, the Klan-dominated Democrat National Convention convened at Madison Square Garden in New York City.

The national delegation were mainly members of the Ku Klux Klan. The Klan attended in large numbers in support William McAdoo for President of the United States.

They also attended in support of their members on the Democrat Platflorm Committee. These are copies of the front page of the New York Times and the Washington Post after opening day of the meeting.

The Washington Post also published a cartoon of a Klan member riding a donkey to illustrate the Klan's influence over the Democrat Party.