President Donald Trump is on the verge of a major Justice Department "massacre," says Jerome Corsi, the famed investigative author.

"We're right now at the point where I think Donald Trump is getting ready to fire Mueller," Corsi said.

"I think it's imminent," he added with emphasis.

Failing that, they also created a plan to stop Trump's presidency, an effort they code-named the "Prudential Plan."

Corsi claims that new allegations that the FBI placed an informant in the Trump campaign are the "straw that broke the camel's back" — giving President Trump the impetus to "clean house at DOJthe "people who are entrenched in Washington, from the very beginning wanted Trump out and were going to do anything they could to get him out."

Edward Klein, the famed author of "Blood Feud" and "The Amateur," calls "Killing the Deep State" an "explosive must-read that not only exposes the insidious nature and goals of the shadow government, but also provides a road map to ensuring that the will of the people — through President Trump — succeeds." and bring in an impartial group of prosecutors to review the matter."
Posted by Pappy at 5:36 PM No comments:

The constitutional crisis is here    By Eugene Robinson   The Washington Post

© REUTERS/Carlos Barria U.S. President Donald Trump attends a dinner with governors on border security and safe communities at the Blue room of the White House in Washington, U.S., May 21, 2018.

Trump has hurled us into a constitutional crisis

Editor’s note: The opinions in this article are the author’s, as published by our content partner, and do not necessarily represent the views of MSN or Microsoft.

Stop waiting for the constitutional crisis that President Trump is sure to provoke. It’s here.

On Sunday, via Twitter, Trump demanded that the Justice Department concoct a transparently political investigation, with the aim of smearing veteran professionals at Justice and the FBI and also throwing mud at the previous administration. Trump’s only rational goal is casting doubt on the probe by special counsel Robert S. Mueller III, which appears to be closing in.


Trump’s power play is a gross misuse of his presidential authority and a dangerous departure from long-standing norms. Strongmen such as Russia’s Vladimir Putin use their justice systems to punish enemies and deflect attention from their own crimes. Presidents of the United States do not — or did not, until Sunday’s tweet:

Trump is determined to use the Justice Department and the FBI to punish those he sees as political enemies. This is a crisis, and it will get worse. (EUGENE ROBINSON)

What else is he to do ? Trump cannot run an investigation on his own, so...who else would he designate to do the investigation ??

READ ON
Posted by Pappy at 4:50 PM No comments: 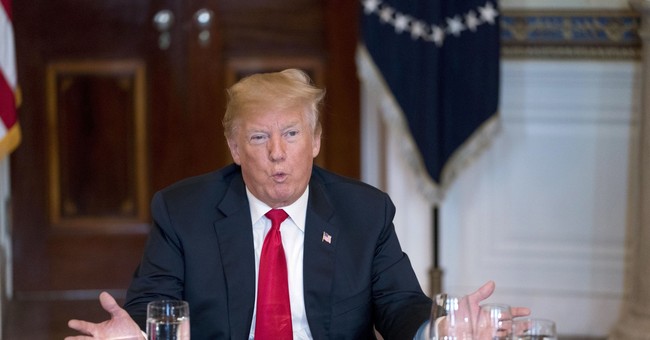 The sordid story between the Trump White House, and the Federal Bureau of Investigation/ Department of Justice reached a new level last week: there reportedly was a spy working the campaign. The asset appears to have tried to establish relationships between Sam Clovis, George Papadopoulos, and Carter Page—all members of the Trump team—in the hopes of gleaning information from them; all of this occurring under then-President Obama’s DOJ/FBI.

Kimberley Strassel ✔ @KimStrassel
1. So a few important points on that new NYT "Hurricane Crossfire" piece. A story that, BTW, all of us following this knew had to be coming. This is DOJ/FBI leakers' attempt to get in front of the facts Nunes is forcing out, to make it not sound so bad. Don't buy it. It's bad.
Posted by Pappy at 1:19 PM No comments: 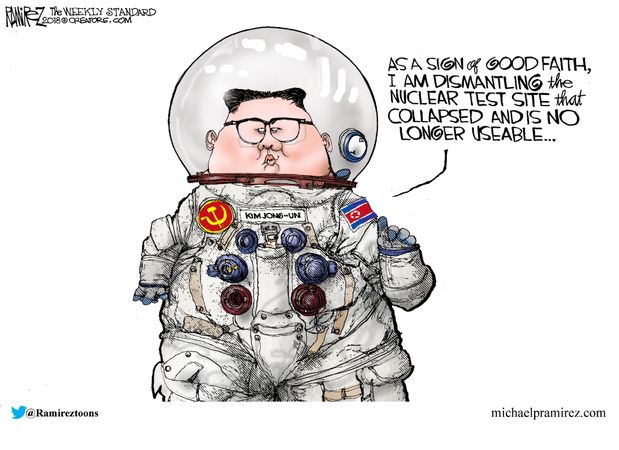 For those who may not know...Comcast is the parent co. (owner) of NBC Channel 10....notoriously Democrat

Former U.S. intelligence officers slammed the media companies for hypocrisy in retaining a Russian firm while criticizing others who have even tangential ties to Russians. They also considered their decision to trust their web back-end to a foreign-based company naive.

“This clearly is a hypocrisy issue,” retired Col. James Waurishuk, a former deputy director for intelligence at the U.S. Central Command and a senior national security analyst with the National Security Counsel under President George H.W. Bush, told TheDCNF. “All of the media companies have reported Trump and the Russian collusion story that all things Russians are bad. So why are they doing business with a Russian company?”

EastBanc is based and incorporated in Washington, D.C. On the surface, it appears to be a successful stand-alone American IT company. The company provides many traditional tech services including data analytics, cloud services and business intelligence, according to the company’s U.S. website.

read more
Posted by Pappy at 12:25 PM No comments:

Email ThisBlogThis!Share to TwitterShare to FacebookShare to Pinterest
Former Fox News host Eric Bolling slammed Attorney General Jeff Sessions with a blistering tweet.
Sessions has been a punching bag for the Trump Administration, and Bolling decided to take his opportunity Tuesday     According to The Daily Caller:

Has anyone seen Jeff Sessions? Has he been rendered incapacitated? Has he been devoured by the Swamp? Asking because a real AG would have stepped in and shut down this circus by now. Worried about him... poor guy.
4:46 AM - 22 May 2018

Bolling’s direct shot at Sessions is the latest in a series of attacks from close presidential advisors in the media directed at the attorney general. The anger of these advisors centers on Sessions’ original recusal from the investigation of the 2016 presidential election and his unwillingness to curb or assist conservative lawmaker’s efforts to shed more light on the probe.

Judge Jeanine Pirro, a Fox News personality and presidential advisor, similarly blasted Sessions Saturday night calling him “the most dangerous man in America,” saying, “The most of powerful prosecutor in the world, the man who holds the scales of justice in his hands, hides behind the coat tails of a Rod Rosenstein.”

Jeff Sessions has been embattled since taking over as the AG in the Trump Administration, but he has stayed true to his commitment to the president and should be commended for that.
Posted by Pappy at 12:06 PM No comments:

Email ThisBlogThis!Share to TwitterShare to FacebookShare to Pinterest
Sometimes people will BRAG about how smart their kids are, going to college, getting grants and scholarships, amd then I read this article......Many schools also stopped teaching "CURSIVE" writing, because the kids CAN"T read it.....understandable...THEY ONLY HAVE 12 YEARS TO TEACH IT ! ! !  Is it the KIDS or the TEACHERS ???

For  as long as clocks have been in classrooms, teachers have been frustrated by them — usually because the kids are distracted by watching the hands tick away…

When Robert Mueller indicted former Trump campaign chairman Paul Manafort on financial crimes unrelated to his work for Donald Trump, the special counsel figured it was a slam dunk.
But that flew out the window when Manafort’s lawyers filed a motion that stopped Mueller cold in his tracks.
Now Mueller’s case is on the ropes and no one knows what will happen next.
Manafort’s legal team filed a motion with Judge T.S. Ellis to hold a hearing about the sources of illegal leaks from the grand jury Mueller convened to indict Manafort.
The lawyers are arguing that these leaks about Manafort colluding with Russia smeared the former Trump campaign chairman and that the Judge should dig to the bottom of this mess.
Politico reports:

Email ThisBlogThis!Share to TwitterShare to FacebookShare to Pinterest
Full auto fired under water - Amazing video
Ever wanted to see an automatic fire underwater? Of course you have.
It's cool.


Tucker: Trump ran on improving U.S. relations with Russia. But permanent Washington hated that idea. They’ve been pushing a war with Iran for years. Closer ties with Russia would make an Iran war far more complicated. Russia needed to be our enemy, no matter what voters wanted. #Tucker
Posted by Pappy at 10:23 PM No comments:

Email ThisBlogThis!Share to TwitterShare to FacebookShare to Pinterest
DOJ to Comply With Trump Demand for Probe of Campaign Infiltration

The Department of Justice on Sunday said its inspector general will investigate whether the FBI engaged in politically motivated surveillance of Donald Trump's presidential campaign in 2016 following a public demand by Trump to do so, the Washington Examiner reported.
"The Department has asked the Inspector General to expand the ongoing review of the FISA application process to include determining whether there was any impropriety or political motivation in how the FBI conducted its counterintelligence investigation of persons suspected of involvement with the Russian agents who interfered in the 2016 presidential election," Justice Department spokeswoman Sarah Isgur Flores said in a statement.
"As always," Flores said, "the Inspector General will consult with the appropriate U.S. Attorney if there is any evidence of potential criminal conduct."
The request for the IG action came from Deputy Attorney General Rod Rosenstein, who said in a statement, "If anyone did infiltrate or surveil participants in a presidential campaign for inappropriate purposes, we need to know about it and take appropriate action."
Trump earlier Sunday tweeted that he would "officially" ask the Department of Justice to "look into whether the FBI/DOJ infiltrated or surveilled the Trump Campaign for Political Purposes – and if any such demands or requests were made by people within the Obama Administration!"
Posted by Pappy at 10:18 PM No comments:

KEEP THEM MEDICATED , IN A STUPER, THEY'RE EASIER TO CONTROL THAT WAY. Who cares if they really need that drug.......


NRA links school violence to Ritalin. But experts deny link philly.com
"Many of these young boys have been on Ritalin since they were in kindergarten," the new president of the NRA said in reference to causes for school shootings, like the one that killed 10 people in Santa Fe, Texas, last week. He then went on to point to TV and movies.

The National Rifle Association's incoming president has linked school shootings and other violence to using medications such as Ritalin.

Retired Lt. Col. Oliver North told "Fox News Sunday" that perpetrators of school violence "have been drugged in many cases" and "many of these young boys have been on Ritalin since they were in kindergarten." He also blamed a "culture where violence is commonplace," pointing to TV and movies.
North's comments followed the attack Friday at Santa Fe High School outside Houston that left eight students and two teachers dead. Investigators have given no indication that they believe the 17-year-old suspect, Dimitrios Pagourtzis, used Ritalin, which treats attention deficit hyperactivity disorder, or other drugs.

Email ThisBlogThis!Share to TwitterShare to FacebookShare to Pinterest
BIG CATS IN PENNSYLVANIA ? ? ?
I've always hunted in Pennsylvania but in many different areas. I started going to Tioga county about 30 or more years ago, I have a friend who lived in the area. This friend was convinced that there were cougars in the neighborhood, so much so, he started a group to investigate sites where these mountain lions were supposedly seen. He had casts of tracks, blurred pictures and many reports of sightings. I do know he went to a few places to do some onsite tracking himself. All to no avail. Never any positive proof....
This picture changes all that. The picture was taken on a "trail-cam", not sure where exactly, except it was near Camelback ski resort, that's in Monroe county, approximately 160 miles S/E of Tioga county. This picture was also taken in 2013, and the last time I was in Tioga co. was approx. 6 years ago...2012 /13 ??...
also... no way to verify if this pic is authentic or not..JUST HOPING IT IS

Taken from a trail cam at Camelback Skii Mountain, Pennsylvania. The big cats are alive and well in PA.
Posted by Pappy at 9:43 PM No comments: