It's time to take those powers away from the FBI.﻿
Posted by Pappy at 4:53 PM No comments:

Email ThisBlogThis!Share to TwitterShare to FacebookShare to Pinterest
Why Weren’t Liberals Furious About These Photos Of Illegal Immigrant Detentions Under Obama?


While the mainstream media and even globalist former first lady Laura Bush are out there trying to push a fake narrative about the separation of children from parents at the border they all seem to be forgetting one important fact, that George W. Bush initiated the “zero-tolerance policy” and Barack Hussein Obama had no issue implementing it during his presidential administration but the same reporters who are today attacking President Trump were completely silent back in 2014 when the border crisis reached fever pitch under the Obama administration.

“Much of the media coverage over the last few weeks has focused on the policy of separating illegal immigrant children from their parents on the US border.

The Trump administration has come under fire for enforcing the policy, which calls for criminal prosecution of would-be immigrants who cross the border illegally, therefore separating them from their children.

The outrage has struck some reporters as peculiar, particularly since there was abject silence and a lack of outrage when the Obama administration treated illegal immigrants in a similar fashion.

“’Cages’ — The chainlink partitions in the holding facilities at border are the exact same ones we showed you during the Obama Admin. Why didn’t you care then?” Darby tweeted this weekend as the outrage raged over Trump’s use of detention facilities. Darby followed up with a series of photos of the facilities that he published in 2014”

This is all an attack on President Trump, and when they attack President Trump, they attack all of us who support and voted for him. President Trump is doing exactly what we elected him to do. He is enforcing a law that was signed by George W. Bush and enforced by Barack Huessin Obama. But strangely enough, for some reason, when they enforced it, the mainstream liberal media and all the living former first ladies had no issue with it.

The truth here is that our politicians, the very ones who we elect and who we pay for stopped considering us Americans as worthy. Any foreigner who decides to stroll across the border comes before Americans in their book. And then they wonder why an outsider like President Donald Trump was able to beat 16 primary challengers and went on to hand Hillary Clinton and the Democrat Party the biggest upset in Presidential election history.

We the people woke up, and we will never again vote for people who believe foreign nationals are worth more than law-abiding American citizens and legal residents!
Posted by Pappy at 11:02 AM 1 comment:

I WAS RECENTLY WONDERING, WHATEVER HAPPENED TO JOHN PODESTA ? WOULDN'T IT BE GREAT IF HIS SORRY ASS WAS THROWN IN PRISON

Email ThisBlogThis!Share to TwitterShare to FacebookShare to Pinterest
Robert Mueller Was Caught Red Handed Covering Up One Terrible Crime

Special counsel Robert Mueller’s witch hunt against President Trump is comng under increasing levels of scrutiny.
Mueller and his team’s conduct is being given a new look as more Americans realize he is running a political fishing expedition.
And a recent court battle uncovered Mueller covering up this terrible crime.
Lawyers for Paul Manafort continue to fight Mueller and his prosecutors over their conduct during the investigation which resulted in Manafort being charged with a series of financial crimes unrelated to the 2016 election.
The latest salvo was fired over Mueller prosecutor Andrew Weissman arranging a meeting with reporters from the Associated Press.
During the meeting, the journalists colluded with the government to reveal the existence of a storage locker that was later raided by the FBI where they seized documents used in the investigation.
Journalists working as government informants was bad enough – that only happens in old communist Soviet republics and third world banana republic dictatorships – but what made matters even worse was the government leaked the information to the reporters.
Read More.

Email ThisBlogThis!Share to TwitterShare to FacebookShare to Pinterest
Was the ‘Law to Separate Families’ Passed in 1997 or ‘by Democrats’?  Fact Check Politics

LINK...…https://www.snopes.com/fact-check/was-law-separate-families-passed-1997/
Posted by Pappy at 8:28 PM No comments:

Email ThisBlogThis!Share to TwitterShare to FacebookShare to Pinterest
Did the Obama Administration Place Immigrant Children With Human Traffickers?


On 17 June 2018, right-wing blogs published a flurry of stories reporting that the administration of former United States President Barack Obama had handed immigrant children over to human traffickers.

The reports were posted in response to the public outcry over a policy enacted by Obama’s successor, Donald Trump, whose administration in April 2018 announced a “zero tolerance” immigration policy. Under this policy, all adults who are caught crossing the southern U.S. border between ports of entry are being charged with federal crimes and then separated from accompanying children.

As the policy went into effect, news reports documenting scenes of distraught, traumatized children being torn from their parents by immigration authorities, and images migrant children being held in cages, created a backlash from both sides of the political spectrum against the Trump administration.
In response to the growing fallout, the president’s supporters wrote up stories criticizing his predecessor based on a 2015 criminal case and 2016 Senate report stemming from a Marion, Ohio human trafficking ring that used migrant children for forced labor on an egg farm. Right-leaning blogs like WesternJournal.com’s Conservative Tribune for example confusingly reported the media was “silent” about the case while aggregating their story from a New York Magazine report:

The left-leaning media stayed strangely silent when the detention of migrant children went on for years before Trump took office… and now it looks like they also kept quiet when Barack Obama’s administration literally placed immigrant children in the hands of human traffickers just a few years ago.

“The United States government placed an unknown number of Central American migrant children into the custody of human traffickers after neglecting to run the most basic checks on these so-called ‘caregivers,’” New York magazine reported in 2016, based on a Senate report.

Snopes.com has long been engaged in the battle against misinformation, an effort we could not sustain without the support of our readers.

SO....What should they be called ? A "cowperson", a "cowpoke"....The gender changes with the person represented, if a girl, she becomes a "cowgirl". Do the want to be called a "cownigga" or a "cowinjun". This is just another ploy to cause friction between the races. Like the song says..."momma don't let your babies grow up to be cowboys//cowpeople//.....forget it ! ! 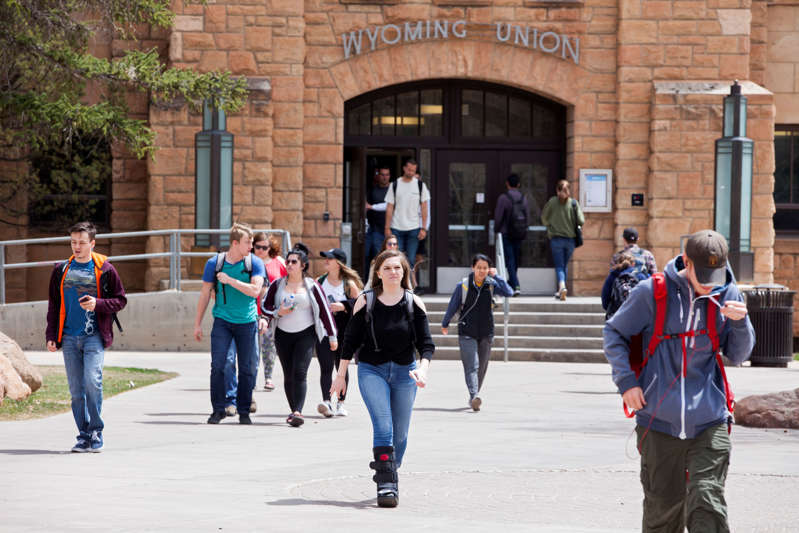 © Melanie Stetson Freeman/The Christian Science Monitor via Getty Images LARAMIE, WY - APRIL 30: Students walk across campus between classes at the University of Wyoming, on April 30, 2018 in Laramie, Wyoming. UW is a land-grant university, founded in March 1886 and opened in September 1887. The University of Wyoming is unusual in that its location within the state is written into the state's constitution. (Photo by Melanie Stetson Freeman/The Christian Science Monitor via Getty Images)
A marketing campaign adopted by the University of Wyoming in Laramie centered on the slogan: "The world needs more cowboys" has run into trouble as faculty members and Native American groups say it excludes women and people of color.
The motto was to be featured in promotional materials sent to prospective students, but complaints about its message, from a campus with a diverse, 12,000-strong student population, prompted the school's board of trustees to take up the issue this week.
The state’s flagship college said the anchored a broader campaign showing images of people of different races and genders."In a vacuum, the term ‘cowboy’ appears gender and perhaps race specific but in the context of the branding campaign it is connected to images and words that show our cowboys are diverse, of every sex and background,” university spokesman Chad Baldwin said.Darrell Hutchinson, cultural specialist with the Northern Arapaho Tribe in Wyoming, said the slogan implied that people who do not fit the stereotypical image of a cowboy – a white man with a wide-brimmed hat riding the range on horseback – are not welcome.
“If you’re not a white person and especially if you’re an Indian, it would make you feel out of place - it wouldn’t make you feel too good about yourself,” he said...……..ASSHOLES....ALL OF THEM...
READ MORE
Posted by Pappy at 7:47 PM No comments:

One benefit of the media obsession with the children of illegal aliens and the fruitbats who are demanding the abolishment of ICE is that it has elbowed the Fab Five from Parkland out of the news cycle.
There has been precious little coverage of the opportunistic little swine David Hogg who cynically exploited the deaths of fifteen of his classmates who were massacred by a deranged school shooter to promote himself as a political player.
There was nothing hotter than Hogg for three straight months until the bullying little prick began to wear out his welcome by being overly obnoxious and incapable of simply sticking to the anti-gun talking points which grew old and largely backfired on the groups that were underwriting Hogg. The Democrats would soon move on to calling for violence against Trump administration figures and crafting their attack to appeal to those sympathetic to open borders, mass amnesty and the war on cops.
Following the release of his ghostwritten book Never Again and the launching of a summer barnstorming bus tour, it’s been crickets as far as Boss Hogg is concerned.
Until Saturday when he inserted himself into a conflict between Illinois Governor Bruce Rauner and Chicago Mayor Rahm Emanuel over the shutting down of a major Windy City highway for an anti-gun/racial grievance mob action on Saturday morning.
The pernicious little scum-sucker and his communist classmate Emma Gonzalez used the march to wedge their way back into the spotlight with missives to their Twitter followers:

David Hogg ✔ @davidhogg111
.@GovRauner should care about the guns coming in from other states considering most guns used in Chicago crimes are found to have been trafficked in.Illinois is more strict on fireworks than guns and the youth are the ones paying for it. @GovRauner help save lives #DanRyan
Shannon Watts ✔ @shannonrwatts
.@GovRauner - When will you sign the Combating Illegal Gun Trafficking Act? It’s the least you could do in light of today’s protest on the Dan Ryan: https://act.everytown.org/sign/act-now-stop-illegal-guns-illinois/?ak_proof=1&akid=129571.3057.16KXPR&rd=1&refcode=emne_SB337Sign20180707&source=emne_SB337Sign20180707&t=14&utm_campaign=SB337Sign20180707&utm_medium=e&utm_source=emne_SB337Sign20180707 … #twill https://twitter.com/govrauner/status/1015586081067192321 …

Then seeing his opening Hogg did what every liberal does by spewing profanity at the governor in another tweet:

David Hogg ✔ @davidhogg111
You know what's unacceptable is the fact that over 150 kids under the age of 21 have died since the beginning of the school year in Chicago and you can’t name a single fucking one. #DanRyanShutdown
Governor Rauner ✔ @GovRauner
This is unacceptable. We had clear parameters that allowed the protestors to be heard while respecting law and order. Instead, they chose instead to cause chaos.

That’s the modern Democratic party and their celeb activists for you. They are incapable of crafting a rational argument and instead speak in gutter trash terms that basically amount to a noun, a verb and the word “Fuck” or some variation of it.
It seems to be a pretty desperate play by Hogg to regain some of the limelight and in taking sides with Mayor Emanuel he continues to show that he is no transformational figure at all but rather just one of the cast of millions of inarticulate angry losers who need their mouths washed out with soap.
Try as he may, the punk’s fifteen minutes of have already passed and he has outlasted his shelf life.