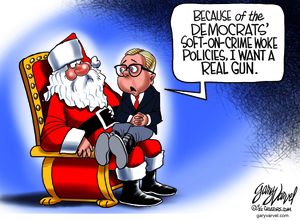 Biden wants to take your guns

In case there is any doubt, President Joe Biden wants to take your guns.

FILE - President Joe Biden speaks during the Partnership for Global Infrastructure and Investment meeting at the G20 summit, Nov. 15, 2022, in Nusa Dua, Bali, Indonesia. Biden is strengthening U.S. policy aimed at stemming sexual violence in war conflict zones. On Monday, Nov. 28, he will sign a presidential memorandum that will elevate the problem to the level of a possible serious human rights abuse that triggers sanctions and other restrictions against foreign perpetrators. (AP Photo/Alex Brandon, File)© Provided by Washington Examiner

On yet another vacation, Biden spoke to reporters about the recent shooting of University of Virginia football players and the Walmart shooting in Chesapeake, Virginia. “The idea we still allow semi-automatic weapons to be purchased is sick,” Biden said. “Just sick. It has no, no social redeeming value. Zero. None. Not a single solitary rationale for it except profit for the gun manufacturers.”

Note that Biden did not say “assault weapons” or “assault-style weapons" — the liberal description of semi-automatic rifles that Democrats think look scary. Biden was not talking about AR-15s. He said it is “sick” and there is “not a single solitary rationale” for people to be able to own semi-automatic weapons. That includes handguns.

Handguns are the most popular firearms for self-defense. Using 2019 data from the Bureau of Alcohol, Tobacco, Firearms, and Explosives, we can determine that roughly 84% of all handguns manufactured in the United States were semi-automatic weapons. That number has stayed relatively stable over the years, including 85% in 2018, 84% in 2017, and 85% in 2016. Therefore, we can assume that roughly 85% of privately owned handguns are semi-automatic.

“Starting in 2009, Glock-type semiautomatic handguns, purchased for personal protection, began to outsell rifles, which have been typically used in hunting,” according to the New York Times. The rise in crime in the aftermath of the Black Lives Matter riots in 2020 led to a surge in gun sales, and with that came a surge in demand for handguns. “Demand for semiautomatic handguns rose at the fastest rate on record, with pistol production rocketing from around three million to 5.5 million annually,” according to the New York Times.

There are two possibilities that explain Biden’s comments. The first is that he thinks average law-abiding citizens do not deserve to be able to protect themselves, which would match his praise of gun-grabber Beto O’Rourke and his repeated claims that the Second Amendment is not an absolute defense against banning guns. The other conclusion is that Biden knows nothing about guns, does not know what semi-automatic even means, and does not understand that there is little functional difference between semi-automatic handguns and semi-automatic rifles.

Either Biden knows what he is calling for, or he wants to restrict gun ownership without knowing anything about the guns he wants to restrict. The result is the same: Biden would ban average law-abiding citizens from buying and owning guns to defend themselves at a time when Democrats refuse to prosecute criminals to the full extent of the law.
Posted by Pappy at 7:52 PM No comments: