The Gun Industry’s Surprising Take on the Trump Administration   By Kelly- Feb 6, 2018

Borrowed "A Nod To The Gods"

Somebody needs to go to jail. Back in the day it was a tall tree and a short rope.

If you put all the pieces together here’s what you get. The DNC rigs the Democratic Primary Election against Bernie Sanders so Hillary can win the nomination. Obama’s administration starts to request surveillance on Trump, his family, his transition team, and anyone associated with him. Donna Brazil gives Hillary the questions to a debate. The DNC pays Christopher Steele to come up with a smear dossier about Trump. The mainstream media releases a taped conversation about Trump talking about grabbing women parts. After all this Trump still wins the General Election. Obama orders an investigation into Russia meddling in our elections. Obama changes Executive Order 12333 to allow more agencies to have access to surveillance data. The Democratic Party comes up with a scandal that Trump Colluded with Russia to win the election with no evidence or proof. This wild claim is backed up by the mainstream media. Obama hold overs start unmasking Trump’s transition team and staff members then release the classified information to the mainstream media. Why? Because the DNC and the Obama administration colluded with the intelligence community to thwart Trump’s campaign efforts to get him elected president. All this Russia collusion is an attempt to cover up the fact that the Obama administration, the intelligence community, the DNC, along with the mainstream media used our nations surveillance as a political tool to try to get Hillary elected President. This makes Watergate look like a kindergarten play. Let that sink in…

WATCH: Did the FBI Just Declare War on Trump?!

Trump critics over the last week, warning that Trump doesn't knowI've heard garbage like Phil Mudd's shtick in the clip below from various  who he's messing with, insinuating that not only would it be proper for the FBI to go to war with the president but that they can fight dirtier than he can if need be. This same agency is infamous for its decades of quiet and sometimes not so quiet abuses of power under J. Edgar Hoover. Is that what Phil Mudd wants to see happen to Trump — the full Hoover? Would he like to see Chris Wray overtly threaten the chief executive for the sin of focusing public scrutiny on his kingdom?
Does he want a "deep state" war on the White House?
Given the sort of rhetoric he's used in the past about Trump and the intel community ---
"Government is going to kill this guy"
...... I have to assume the answer is yes.
Posted by Pappy at 5:06 PM No comments:

President Donald Trump's lawyers are advising him to refuse an interview with Russia investigation special counsel Robert Mueller, The New York Times reported Monday.
The decision — expected in the coming weeks — could trigger a long court battle over whether Trump must answer questions under oath, and could wind up being decided by the Supreme Court, the Times reported.
According to the Times, the president's lawyers are concerned he could be charged with lying to investigators; Trump himself has announced he looks forward to talking with Mueller as part of the probe into Russia's interference in the 2016 election.
But refusing to sit for an interview opens the possibility Mueller will subpoena the president to testify before a grand jury, the Times reported.
The Times, citing four unnamed sources, reported the Trump lawyers urging him to rebuff a sit-down are John Dowd and Jay Sekulow, along with "many West Wing advisers" — all of them convinced Mueller lacks the legal standing to question Trump about some issues, including his role in a response to Donald Trump Jr.'s meeting with Russians at Trump Tower in June 2016.
They also argue other matters are perfectly legal — like the allegations the president asked former FBI Director James Comey to end a probe into the former National Security Adviser Michael Flynn, the Times reported.


The House Intelligence Committee memo about 2016 surveillance abuses, released Friday, lays out grave evidence that the FBI wasn’t fully forthcoming with the Foreign Intelligence Surveillance Court as it sought an order to wiretap former Trump adviser Carter Page. It’s possible the FBI’s lack of candor was even worse than the memo describes.
Democrats are disputing the memo on lots of grounds, but they’ve said little about the FBI’s failure to inform the court that the bureau had itself decided one of its main sources, dossier author Christopher Steele, was unreliable. Mr. Steele in October 2016 gave Mother Jones an unauthorized interview about the dossier. As a former British intelligence officer, Mr. Steele would have known that sources are not supposed to blab to the press. The interview appeared but a few days before the election, was at the direction of his paymaster, the opposition-research firm Fusion GPS, and was clearly designed to help the ultimate client: the Hillary Clinton campaign.
Stuck with a source now brazenly using the FBI for political purposes, the bureau suspended and then terminated Mr. Steele. Only nine days before the Mother Jones interview, the bureau had filed its application for the Page wiretap order, which rested on the Steele dossier. Yet the FBI did not immediately go back to tell the court it no longer trusted Mr. Steele, the author of a crucial piece of evidence.
Read more at FOX NEWS
Posted by Pappy at 3:49 PM No comments:

Email ThisBlogThis!Share to TwitterShare to FacebookShare to Pinterest
Mark Levin sorts it out, and gets right to the point!
Hillary Clinton paid for a warrant. That’s the easiest way we can put it. Hillary Clinton colluded with the Russians. But it appears the FBI at the seniormost levels colluded with the Russians, too. Whether it was witting or unwitting, it doesn’t matter. That’s a fact.

Mark Levin on FISA Memo Revelations: 'Hillary Clinton Paid for a Warrant - That's the Easiest Way to Put It' - Breitbart

READ ON
Posted by Pappy at 3:28 PM No comments:

PHILLY SHOWING THE LOVE FOR THEIR EAGLES 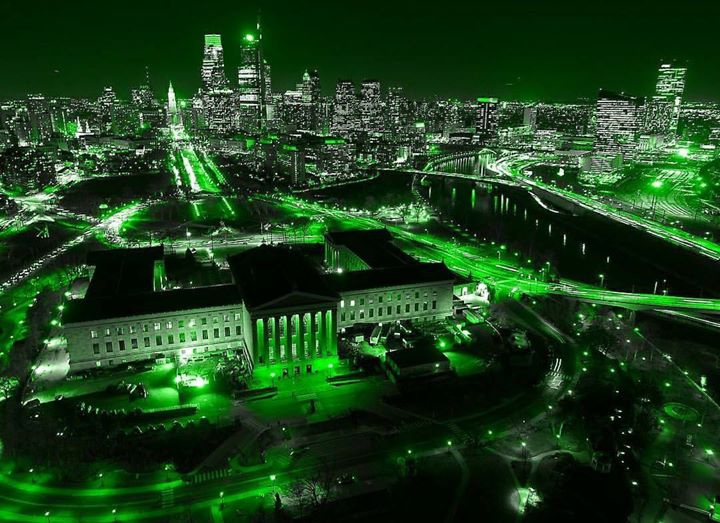 I really hate to see Trey Gowdy leave....I think he is honest and persevering in his quest for the truth. I had really hoped he would have been appointed as AJ under Trump. He will be missed !

Outgoing Republican Congressman Trey Gowdy expressed his ongoing confidence in the Justice Department and the special counsel despite "serious concerns with the FISA process."
The House Oversight chairman, who Wednesday announced he would retire at the end of his current term, also tweeted he remains "100 percent confident in special counsel Robert Mueller."
Gowdy was reacting to the memo released by the House Intelligence Committee that outlined what it called abuses of Foreign Intelligence Surveillance Act (FISA) applications regarding surveillance on former campaign aide Carter Page.
Democrats, meanwhile, see the memo's release as a "charade" that will be used by President Donald Trump to fire Deputy Attorney General Rod Rosenstein, who appointed Mueller and oversees his work in the Russia investigation.

Email ThisBlogThis!Share to TwitterShare to FacebookShare to Pinterest
Analysis: Why the Memo Hit Its Target Even Without a Bombshell   The New York Times By MARK MAZZETTI

© Eric Thayer for The New York Times Microphones were set up outside a meeting room used by the House Intelligence Committee on Friday.
WASHINGTON — The release of the memo mattered less than #releasethememo.
After weeks of buildup, the three-and-a-half-page document about alleged F.B.I. abuses during the 2016 presidential campaign made public on Friday was broadly greeted with criticism, including by some Republicans. They said it cherry-picked information, made false assertions and was overly focused on an obscure, low-level Trump campaign adviser, Carter Page.
It didn’t live up to the hype.
READ ON

GOING BACK TO WHEN TRUMPSTATED HE WAS BEING WIRETAPPED.......While it wasn't Trump personally (that we know of) that was wiretapped, but Paul Manafort was,


Manafort wiretapped — and suddenly, Trump’s not so crazy  By Cheryl K. Chumley - The Washington Times

Then-Trump Campaign Chairman Paul Manafort talks to reporters on the floor of the Republican National Convention at Quicken Loans Arena in Cleveland. U.S. government investigators were wiretapping the head of Donald Trump’s presidential campaign, both before and after the election,
ANALYSIS/OPINION:

Paul Manafort, President Donald Trump’s former campaign manager, was being wiretapped by feds — not just once, but twice — as part of an FBI investigation into his dealings in Ukraine and Russia. The secret surveillance took place at a time when Manafort was in contact with Trump, all the way into 2017.

And with that, Trump, who claimed that his Trump Tower had been wiretapped by Barack Obama in the lead-up to the election, is suddenly no longer the crazy dude the left made him to appear.

Suddenly, it seems — hey now, maybe feds working under the Obama administration did catch Trump in some secret hot mic-type moments with Manafort.

That’s not exactly the same as saying this, from Trump in March: “Terrible! Just found out that Obama had my ‘wires tapped’ in Trump Tower just before the victory. Nothing found. This is McCarthyism!”

But it does cast some shadows.

Email ThisBlogThis!Share to TwitterShare to FacebookShare to Pinterest
WaPo Columnist: The Democrats' Antics During Trump’s State Of The Union Was Embarrassing

Okay—it’s not a defense of President Trump. In fact, it takes
swipes at his presidency quite well, as if to shout at
Democrats’ faces what they need to say to combat the
message he’s disseminated to the country, especially on
economic growth Nevertheless, Washington Post columnist
Dana Milbank was not happy with how Democrats reacted to
President Trump’s State of the Union. He seemed especially
taken aback at the notion that scores of congressional
Democrats didn’t stand when he entered the House Chamber,
breaking the common rule that when the president enters,
no one sits—ever:


A TIMELINE OF TREASON: How the DNC and FBI Leadership Tried to Fix a Presidential Election [Updated] For your review:

Crowd-sourcing appeal: please point out any errors or omissions in the comments, along with source links.

As an aside, this appears to be the biggest political scandal in the history of the country. Never before has an outgoing administration attempted to fix a presidential election. It's like something out of a third world country. But then, Obama always admired dictators like Fidel Castro and Hugo Chavez.