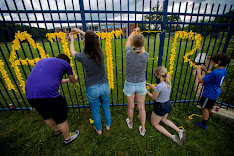 Idaho's governor last week signed into law a bill whose purpose, at face value, is noncontroversial. The law prohibits public schools and colleges from teaching that "any sex, race, ethnicity, religion, color, or national origin is inherently superior or inferior."
Critics warn these measures are part of a larger movement to draw America’s culture wars into classrooms. And this war centers on a once-obscure legal theory about how the legacy of slavery continues to permeate American society today.

“Critical race theory” goes beyond advocating for civil rights or banning discrimination. Proponents see it as a framework to examine how the taint of racism still affects Black Americans and other people of color in matters ranging from who gets bank loans and admission into elite universities to how suspects are treated by police.

Detractors dismiss critical race theory as a method for “teaching kids to hate their country” or to promote “public school wokeness.”

But while such talking points play well among conservative media circles, political and legal experts contend they obscure more meaningful discussion about the role systemic racism plays in the American experience.

The bills seeking to prohibit the instruction of “divisive concepts” seldom mention critical race theory directly, but in many cases legislators have cited it as a driving force behind the measures.

In an April Facebook post promoting a bill in Rhode Island that has since stalled in committee, state Rep. Patricia Morgan, a co-sponsor, wrote, "Critical Race Theory must be stopped." After quoting Martin Luther King Jr., she went on to say, "Our state must reject the neo-racism and race-shaming of Critical Race Theory. We have no time to waste in rooting out this disturbing, divisive and false ideology."

While discussing a new civics education initiative in Florida's public schools, Gov. Ron DeSantis said, "There’s no room in our classrooms for things like critical race theory. Teaching kids to hate their country and to hate each other is not worth one red cent of taxpayer money."
READ MORE
Posted by Pappy at 9:47 AM No comments:

FROM WEASEL ZIPPERS
Posted by Pappy at 10:18 PM No comments:

Email ThisBlogThis!Share to TwitterShare to FacebookShare to Pinterest
Kayleigh McEnany... ON GAS SHORTAGE

STATE OF THE UNION...

Congratulations idiots of America, the Democrat’s have elected a complete idiot in as President just because they didn’t like the way Trump talked and he hurt their sensitive feelings.

Biden has basically destroyed this Country in 90 days.

China, Russia, North Korea and Iraq know our leadership is extremely WEAK and they are capitalizing on it.

Just 90 days in we have a boarder crisis like we’ve never seen, a MAJOR oil pipeline has fell victim of a cyber attack from Russia. Iraq is trying to disrupt oil shipments causing American war ships to fire warning shots at them and China says we have a chip shortage that’s completely crippled the American automotive industry.

Y’all are so damn focused on the BS the media has fed y’all you haven’t even noticed these major issues. Y’all are to focused on this cancel culture, gender equality, systematic racism and Police “brutality” BS to even see the MAJOR issues at hand.

Just think back, we had 4 years with no new wars, lowest black unemployment numbers ever seen, energy independence, nothing heard out of Rocket Man, three separate peace deals signed in the Middle East under Trump, but he hurt your feelings.

I could care less about your feelings, I want my Country protected and our economy strong !!!

Email ThisBlogThis!Share to TwitterShare to FacebookShare to Pinterest
FINALLY: New jeans without the knees ripped out..
Posted by Pappy at 7:47 PM No comments:

Email ThisBlogThis!Share to TwitterShare to FacebookShare to Pinterest
This is URGENT -- and SERIOUS.

As I told you recently, the ENTIRE Radical Left are doing everything they can to stop the audit of the Maricopa County ballots.

And the bad news is that it looks like Joe Biden's Department of Justice is now scheming a way to intervene and stop the audit in Maricopa County.

Friend, it's Arizona's sovereign right to clean up election fraud in our state.In fact, the U.S. Supreme Court even made it clear that the State Legislature has jurisdiction over election fraud -- not Biden and his cronies at the Department of Justice.
So I've got a message for Joe Biden's Justice Department:
"You need to stay in your lane.
Do not touch Arizona ballots or machines -- unless you want to spend time in an Arizona prison."
Wendy Rogers, Lt Col USAF (ret) Arizona State Senator
Posted by Pappy at 7:59 PM No comments:

Is the US a "Constitutional Republic" ??

If as it says, that the constitution is the "ultimate rule of law", then he laws in the constitution cannot be changed without actually changing the constitution, (a consitutional ammendment), which has not been done...SO, the 2nd ammendment stands as written "A well regulated Militia, being necessary to the security of a free State, the right of the people to keep and bear Arms, SHALL NOT BE INFRINGED."
The current constitution was adopted in 1788, with the first ten amendments, collectively named the Bill of Rights, being ratified in 1791 to guarantee many fundamental civil liberties. For 233 years.
The United States Constitution is one of the most important legal documents in modern history. It has allowed each state to remain equal when discussing matters on the floor of Congress and has allowed for people throughout these United States to be heard in the matters of government. The US falls under governmental classifications for both Indirect Democracy and Constitutional Republic, but could be more accurately classified as the latter. The true power of the United States Federal Government derives from the populace that it protects and governs but ultimately its rule of law comes from the Constitution. Therefore, since the US government is representative in nature and derives its laws from the Constitution, it should be classified as a Constitutional Republic rather than a Democracy. When Benjamin Franklin was asked about what form of government he had helped to create, he responded, “a Republic, if you can keep it”.
IF ALL OF THIS ABOUT THE CONSTITUTION IS TRUE, THEN ANY RESTRICTIONS BIDEN TRIES TO IMPOSE ON THE 2ND AMMENDMENT IS ILLEGAL...!!.....OTHERWISE, SEE BELOW

The United States is no longer a Constitutional Republic ...

Who’s Up For Another Garbage Poll Showing Massive Approval Numbers For Joe Biden? By Mike LaChance -May 11, 2021

The media is really bending over backwards to make it look like Joe Biden is more popular than he really is.

A new poll shows Biden’s approval at over 60 percent. Does anyone believe that?

Once again, if you dig into the poll, you see how they came up with such a ridiculous figure.

Joe Biden is immensely popular and Democrats are ascendant. That’s the narrative the polling industry would like you to believe. Yet, in an environment where pollsters have routinely published polls with recalled samples of Biden voters +14 or more (i.e. nowhere near reality) to fluff the new administration, this latest effort from the Associated Press really stands out…

There are outliers, and then there’s claiming that Joe Biden has a 63% approval rating. How they got there becomes clear once you dive into the methodology. For example, their sample came out to 46% Democrat and only 17% Independent. That comes nowhere close to any current tracking of political affiliation.

Even just comparing the AP-ORC poll to other recent polls shows how unreliable it is. Looking at the major other polls in May, these are the other results: 50%, 55%, 49% via Rasmussen, Reuters, and YouGov, respectively. The poll is also not of registered or likely voters, making it non-predictive in regards to the political environment.
Julie Pace
@jpaceDC
·
May 10
New
@AP
poll out this morning: Biden’s overall approval rating sits at 63%. When it comes to the new president’s handling of the pandemic, 71% of Americans approve, including 47% of Republicans.

WASHINGTON (AP) — President Joe Biden is plunging into the next phase of his administration with the steady approval of a majority of Americans, according to a new poll fromapnews.com
8:26 AM · May 10, 2021
The media is nothing more than Democrat propaganda.
It’s pathetic !
Posted by Pappy at 3:04 PM No comments: 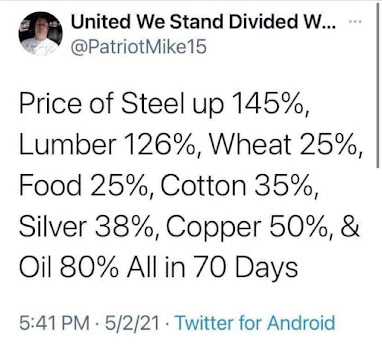 Why is that, he was asked? And his reply was,

Many will not understand it, but you have to raise warriors, not parasites"

And add to that the historical reality that all great "empires"...the Persians, the Trojans, the Egyptians, the Greeks, the Romans and in later years the British...all rose and perished within 240 years. Each "rotted from within".

America has now passed that 240 year mark and the "rot" is visible all around us and now accelerating quickly. We are past the Mercedes and Land Rover Years and the camels are in our yards. And 45 million Americans demonstrated last November by voting for Biden that they know nothing of history and/or think we should all be riding camels!"