I pulled this off Facebook, posted by a cousin of mine. This makes a lot of sense and I'm sure many people feel this way, I KNOW I DO.....

I've been fairly quiet over the political race but I read this story about 'racoon poop' and it sums up how I feel pretty good.
I like the fact that Trump is not politically correct..that he's rude, crude and at times socially unacceptable. This country needs more of that.
Like many citizens, I understand why Trump has such a remarkable following but some people question it. A friend sent me this story and it makes no difference about your political leanings, this is just a good explanation of WHY... (or it's as good as any I can come up with).
​
Hopefully this will help you understand how on earth Trump can remain so "popular."
OK. On to Racoon poop:
​
To begin, a Republican writes a letter, read on, even if you are a Democrat.
Dear Representative,
From the time I was able to vote, I voted Republican and I am 70+.
I received your questionnaire and request for money and strongly agree with every question as I have since Obama was elected. Unfortunately the one question that was missing is "What have the Republicans done for the ​
American people?" We gave you a majority in the house and senate and you never listened to us. Now you want our money.
You should be more concerned about our votes not our money. You are the establishment which means all you want is to save your jobs and line
​your pockets.
​.​
Well guess what? "It's not going to happen." You can shake in your boots when I tell you our movement is for TRUMP and he hasn't asked for a dime.
You might think we are fools because you feel Trump is on a self-destruct course but look beyond Washington and listen to the masses. Nobody has achieved what he has, especially in the state of New York.
If you really want to know how the majority of people feel? And this applies to both democrats and republicans, read below, it says it all. You've been on vacation, you come home, and your basement is infested with raccoons. Hundreds of rabid, messy, mean raccoons have overtaken your basement. You want them gone immediately. You call the city, 4 different exterminators, but nobody could handle the job.
​.​
But there is this one guy and he guarantees you to get rid of them, so you hire him. You don't care if the guy smells, you don't care if the guy swears, you don't care if he's an alcoholic, you don't care how many times he's been married, you don't care if he voted for Obama, you don't care if he has a plumber's crack, you simply want those raccoons gone! You want your problem fixed! He's the guy. He's the best. Period​!​
Here's why we want Trump, yes he's a bit of an ass, yes he's an egomaniac, but we don't care. The country is a mess because politicians suck, the Republican Party is two-faced & gutless, andWe want it all fixed! We don't care that Trump is crude, we don't care that he insults people, we don't care that he has been friendly with Hillary, we don't care that he has changed positions, we don't care that he's been married 3 times, we don't care that he fights with Megyn Kelly and Rosie O'Donnell, we don't care that he doesn't know the name of some Muslin terrorist.
This country is weak, bankrupt, our enemies are making fun of us, we are becoming a nation of victims where every Tom, Ricardo, and Hasid is a special group with special rights to a point where we don't even recognize the country we were born and raised in; "AND WE JUST WANT IT FIXED" and Trump is the only guy who seems to understand what the people want.
​
We're sick of politicians, sick of the Democratic Party, Republican Party. We just want this thing fixed. Trump may not be a saint, but he doesn't have lobbyist money holding him, he doesn't have political correctness restraining him, all you know is that he has been very successful, a good negotiator, he has built a lot of things, and he's also not a politician, he's not a cowardly politician. And he says he'll fix it.
​
And, we believe him because he is too much of an egotist to be proven wrong or looked at and called a liar. Also, we don't care if the guy has bad hair. We just want those raccoons gone, out of our house, NOW.
You are welcome to pass this on. I feel this is why thousands of people that haven't voted in 25 years are registering to vote this year.
The raccoons have got to go.
Posted by Pappy at 3:04 PM No comments:

Here Are The Latest Starving Muslim Refugees To Land In The U.S.

The word “refugee” typically brings images to mind of poor, starving, third world peasants. Pictures of toothpick thin children suckling on the dried-out teats of equally toothpick thin mothers. Fathers, grieving and wailing to the God of their choosing, begging for forgiveness for unknown sins, for certainly, they must have done something to deserve such a wretched life.

However, in the case of the Syrian refugees coming to America, this is NOT the case. Look above at some of the latest Muslim refugees as they were getting off the boats in New Orleans, Louisiana while simultaneously their Muslim brothers were shooting up and blowing up our brothers and sisters in Paris.

Fortunately, 24 U.S. State’s Governors, as of this writing, have told the Federal Government that they will NOT be accepting any of the Muslim refugees into their states. No doubt, communist California will volunteer to house them all.

Keep your eyes and ears open, people. Jihad was declared on the West long ago, but obviously, we’ve forgotten the lessons we learned on September 11, because we are now inviting them in, putting them up and feeding them, and basically lying down on their chopping blocks to allow them to behead us!
Posted by Pappy at 10:00 PM No comments:

Email ThisBlogThis!Share to TwitterShare to FacebookShare to Pinterest
Posted by Pappy at 9:52 PM No comments:

Okay—I get it if a t-shirt said, “f**k the police,” or something obscene, you need to blur that for national television. I’m not so sure about a 2016 Trump for President t-shirt, which HLN apparently found objectionable when interviewing Steven Eckel, a retired police officer who saved a baby from a hot car. It’s a harrowing story, but one that ended well (via Time):
READ ON
Posted by Pappy at 10:22 PM No comments:


If anyone more junior, or less protected that Hillary Clinton, were to commit just one of the massive intelligence-compromising acts that she and her team has, they would certainly be fired.

And if they lied to Congress, or tried to hide information, or cover-up a crime, they would be charged or impeached, depending upon their status.

That no one is being pursued by the law shows us how far the new ruling elite knows it is above it.

We have come a long way from the Checks and Balances of the Founding Fathers.

Whatever your politics, there should never be one law for the people and another for the rich, famous and well-connected.

The defense offered by the State Department and the Secretary of State's team is laughable. Check it out. Even a seasoned CNN anchor was stunned.

Click here to learn more
Posted by Pappy at 9:58 PM No comments:

According to a new Rasmussen Report, the majority of Americans do not believe the deportation of illegal immigrants living in the United States is aggressive enough.

More than 20 House Democrats last week urged President Obama to halt the deportation of illegal immigrants until Congress passes a comprehensive immigration reform plan, but voters by a two-to-one margin oppose that idea. Most already think the federal government is not vigilant enough in deporting those who are in this country illegally.

Sixty percent (60%) believe the U.S. government is not aggressive enough now in deporting illegal immigrants. Fourteen percent (14%) say it is too aggressive, while 16% think the number of deportations is about right.
READ MORE
Posted by Pappy at 9:35 PM No comments: 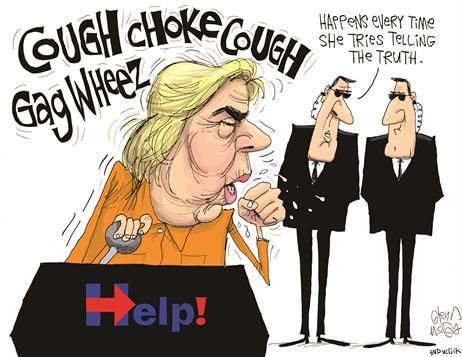 Email ThisBlogThis!Share to TwitterShare to FacebookShare to Pinterest
Trump and Clinton Clash Over National Security
With Labor Day behind them, Donald Trump and Hillary Clinton are battling over national security in the South's top presidential battlegrounds.
Trump, the Republican nominee, released an open letter early Tuesday from 88 retired generals and admirals citing an urgent need for a "course correction" on America's national security policy.
"We believe that such a change can only be made by someone who has not been deeply involved with, and substantially responsible for, the hollowing out of our military and the burgeoning threats facing our country around the world," the military leaders wrote. "For this reason, we support Donald Trump's candidacy to be our next commander-in-chief."
Clinton's campaign is spending big to undercut Trump's message in a new TV ad also released Tuesday entitled, "Sacrifice."
Specifically, the ad shows military veterans watching some of the New York billionaire's more provocative statements, including his claim to know more about the Islamic State group than military generals, his criticism of Arizona Sen. John McCain, a former prisoner of war. It also features Trump's claim that he sacrificed a lot compared to families who have lost loved ones in conflict.
"Our veterans deserve better," reads a line at the end of the ad, which is airing in Ohio, Florida, Iowa, Nevada and Pennsylvania.
The conflicting messages come as the candidates prepare to court voters in Southern states with significant veteran populations. The pair is also set to appear at an MSNBC forum on Wednesday night on national security.


READ MORE
Posted by Pappy at 9:19 PM No comments:

Last week's 58-page, bombshell FBI report partially detailing the criminal investigation into Hillary Clinton's use of multiple private email servers while Secretary of State, didn't make the scandal go away but instead has prompted more questions for the Democrat presidential nominee.

Keep Reading
Posted by Pappy at 9:10 PM No comments:

Email ThisBlogThis!Share to TwitterShare to FacebookShare to Pinterest
Back on Aug. 30th, I posted on Colin Kaepernick not standing for the "pledge of allegiance". I don't know why I said the "Pledge" because I knew it was the National Anthem he didn't stand up for. All that being said, "anonymous" wrote a comment correcting me. All I want to say about it is that I wish people wouldn't sign as "anonymous", if I'm wrong I really don't mind being corrected and would just like to know who is commenting..........
comment below...

Well, it wasn't the Pledge that he refused to stand for, it was the National Anthem. But then again, I'd give even odds (gentleman's bet) that he may very well not know the words to the Pledge........... AFAIK, the school administrator has backed off on his 'prohibition' re the flag. Amazing what a massive backlash does for one's poor decisions. Hopefully the same thing happens to 'k'. on No wonder Colin Kaepernick thinks it's O K not to stand for the "Pledge of allegiance", when school kids aren't allowed to display their countrys flag