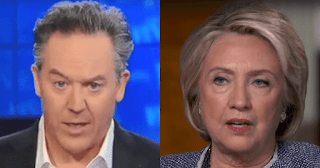 Much like the incurable, sexually transmitted disease Herpes, Hillary Clinton just won't go away and in another of her bitter tirades, she hit a new low last week.

The embittered sore loser who has spent the better part of the last four years sowing the seeds of divisiveness took to her Twitter account on Friday to lob a cheap shot at President Trump over the coronavirus.

With the news that the U.S. had just surpassed China for cases of the disease - it one is to believe the liars in Beijing - Mrs. Clinton tweeted out the following:

“He did promise ‘America First,’ ” Clinton tweeted, referring to the phrase the president has used since his successful 2016 campaign against her. The former secretary of State linked to The New York Times’s Thursday coverage of the U.S. officially leading the world in confirmed coronavirus cases.

In response, Gutfeld said he would tell Clinton to "rot in hell" if she were not "already there."

"I can’t believe I’m going to say, there are no words for Hillary Clinton,” Gutfeld began.