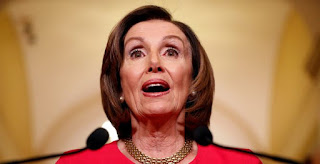 In case you missed it over the weekend, House Speaker Nancy Pelosi falsely accused President Trump of "fiddling" around and called for an investigation into his handling of the Wuhan coronavirus crisis.

"President Trump's denial at the beginning of this was deadly," Pelosi said during an interview with CNN. "As the President fiddles, people are dying."

CNN
✔ @CNN
House Speaker Nancy Pelosi says the President downplaying the severity of coronavirus is “deadly."
“As the President fiddles, people are dying. We just have to take every precaution.” #CNNSOTU


Pelosi is responsible for delaying a $2 trillion relief package for workers and families by a week after blowing up bipartisan negotiations. She then attempted to insert a long list of far-left, radical agenda items into the relief package. Talk about "fiddling," Pelosi is the queen of it. She's proving once again House Democrats aren't interested in working for the American people. Instead, they're interested in political power. They've also shown the only thing they're capable of is launching investigations, rather than governing.

Further, when President Trump took action in late January to ban travel to and from China, Pelosi joined fellow Democrats and accused him of xenophobia. She also criticized the early March travel ban on passengers from Europe, where the Wuhan coronavirus is still raging.

During an interview with Fox and Friends Monday morning, President Trump responded to Pelosi's remarks.

"She's a sick puppy in my opinion and she has a lot of problems," he said. "That's a horrible thing to say."


@orbswideshut
We knew we were saved when Kennedy Center for Performing Arts was added to the stimulus package. A $25 million bailout.I've slept better this week.
Posted by Pappy at 4:39 PM

hey nancy, how about we investigate you for quid pro quo.....
fund my socialist dream list or the american public gets no "stimulas" funding.
convince me that's different than what you tried to impeach trump for.