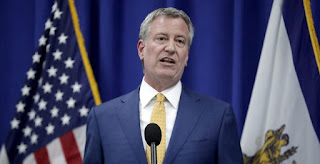 As a religious leader born and raised in New York, I’m appealing to you to reconsider your threats to the synagogues and churches of your city. Your words, sir, were reckless and could actually provoke people of faith to defy you. What on earth prompted you to say what you said?

I’m speaking specifically of your threat to “permanently” close synagogues and churches that refuse to comply with the ban on public gatherings.

Mr. Mayor, what gives you that authority?

Mr. Mayor, who gives you that authority?

Please know that I have been using my platforms (radio, internet, and writing) to urge pastors and leaders to comply with bans on public gatherings.

I have urged fellow-believers to use wisdom and to love their neighbors, accepting these restrictions as something necessary for the public good.

And I have made clear to concerned pastors that these bans are not an attack on their religious freedoms, since the bans affect movie theaters and restaurants and strip clubs and bars as much as churches and synagogues and mosques.

Yet when you specifically threaten to permanently close synagogues and churches that do not comply,  you immediately raise concerns. This certainly does look like religious discrimination.