Does this make sense to anyone ? This is real, not FAKE NEWS or propaganda........


Disclaimer: Hillary's body in this video = Fake News.
Posted by Pappy at 1:22 PM No comments:

These protesters think they are invincable and/or above the law......It's a shame they are dead, BUT they shouldn't try to block an 80 mph FREEWAY

6 DEAD AFTER TRUCK COLLIDES WITH ANTI-TRUMP PROTESTERS ON FREEWAY!!!   topqualitynews.com

A 32-year old man driving a Waldrum Brother’s delivery truck is responsible for the death of 6 Anti-Trump protesters that were blocking traffic while chanting “Dump Trump” in the middle of a Seattle freeway. The accident occurred near an I-15 off-ramp today around 5:15 PM. According to witnesses, a crowd of approximately 16 individuals pulled their vehicles to the side of the freeway and created a barricade by linking their arms together.
The protester’s actions immediately hindered the flow of traffic and motorists became upset at what many of them viewed as an unwanted obstacle preventing them from getting home after a long day at work. A few of the protesters were seen holding signs that read – “Not My President” or “Love Trumps Hate” and all protesters were chanting – “Dump Trump”.

These are the people "RUNNING OUR COUNTRY"

DUMB & DUMBER! After PELOSI Says She “Can’t Work with BUSH,” Maxine Waters SAYS THE DUMBEST THING EVER [VIDEO]  By NYFeed  Posted on April 14, 2017

Did the Democrats have too much alcohol at lunch before going before the press?
Or are they all just imploding?
First, it was House Minority Leader Rep. Nancy Pelosi (D-CA), in a press conference, referring to being unable to work with “President Bush” when she meant President Trump.

Now, listen in that very same press conference to Rep. Maxine Waters (D-CA) who barely seems to get out a coherent thought.
She is unable to say where “bombs are falling.” A reporter has to supplement by saying, “Aleppo.”
Waters then talks about how Vladimir Putin invaded “Korea.” 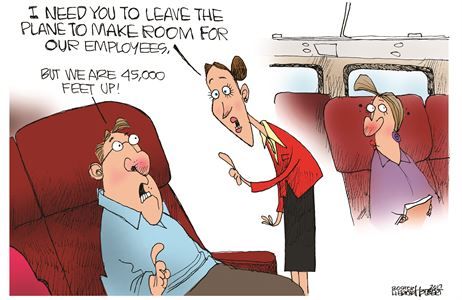 She can't really have forgotten how the "PRESS" treated TRUMP ? Even BEFORE he ran for President......PAYBACKS ARE A BITCH......

MSNBC’s Andrea Mitchell spent much of her recent interview with Politico ranting about the Trump White House’s treatment of the press. Never before, the veteran reporter said, has an administration kept such an arm’s length from the media. Cue her lecture on the Trump team breaking protocol.
“You should not be flying into Beijing without a press corps,” she said. “You should not be going to Moscow without the press corps. It's wrong.”
She went further, accusing the administration of straight up lying to the American people.

While Mitchell is so openly critical of Trump and his White House staff, the MSNBC anchor insisted she was not, as many have claimed, a Clinton hack. It is her job to be “adversarial” and she insists that’s how she treats any presidential candidate. She even said Clinton was largely to blame for not properly addressing her email scandal, calling her initial press conference “horrible.” The Democratic candidate did herself no favors by refusing to hold another presser for months, Mitchell continued.
Yet, in her same conversation with Politico, Mitchell expressed concern for Clinton’s mental health during the presidential campaign, noting that the press was “harassing” her about her emails.
Posted by Pappy at 8:35 PM No comments:

Email ThisBlogThis!Share to TwitterShare to FacebookShare to Pinterest
NBC News
JUST IN: U.S. forces dropped one of the biggest non-nuclear weapons in its arsenal on Afghanistan, Pentagon officials said.

U.S. drops "mother of all bombs" on ISIS tunnel complex in Afghanistan

The U.S. dropped a GBU-43 bomb, nicknamed the "mother of all bombs," on ISIS fighters and tunnels and caves used by the terror group in the country's Nangarhar province, officials said. It was dropped from an aircraft. "Another successful job. We're very, very proud of our military," President Donald Trump told reporters at the White House. "We are so proud of our military."

READ ON
Posted by Pappy at 6:29 PM No comments:

More riots from Paris, France. This is what the media WILL NOT show you!!
Posted by Pappy at 8:21 PM No comments: