Pelosi Makes Impeachment Slip On Live TV – Admits ‘The Voters Are Not Going to Decide,’ Congress Is 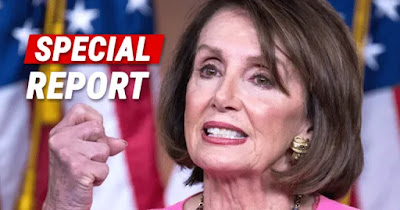 Nancy tried to keep it in – but she can’t take it back now!
As a long-standing member of Congress, Nancy Pelosi claims she’s just doing the will of the American people.
I mean, that’s what all congressmen are supposed to do, right?
But with all this impeachment talk, it’s hard to see if that’s what Pelosi is really after. The most accurate polls show that many Americans are against impeachment.
They have been against it from the very start.

So, it seems that Pelosi is pushing an agenda that goes against what the people want.
When asked about this, she openly admits it.
From Breitbart:

On Thursday at her weekly press briefing, House Speaker Nancy Pelosi (D-CA) said the American people were “not going to decide” if President Donald Trump should be impeached…

A reporter asked, “At what point might you say let’s just let the voters decide.”
Pelosi said, “The voters are not going to decide whether we honor our oath of office. They already decided that in the last election.”
READ MORE