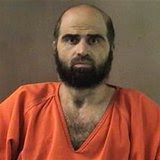 FORT HOOD, Texas (AP) — A military jury sentenced Maj. Nidal Hasan to death on Wednesday for the 2009 shooting rampage at Fort Hood, giving the Army psychiatrist what he believed would be a path to martyrdom in the attack on unarmed fellow soldiers.

The American-born Muslim, who has said he acted to protect Islamic insurgents abroad from American aggression, never denied being the gunman. In opening statements, he acknowledged to the jury that he pulled the trigger in a crowded waiting room where troops were getting final medical checkups before deploying to Iraq and Afghanistan.

The same jurors who convicted Hasan last week had just two options: either agree unanimously that Hasan should die or watch the 42-year-old get an automatic sentence of life in prison with no chance of parole.

Hasan had no visible reaction when the verdict was read Wednesday, staring first at the jury forewoman and then at the judge.

Officials said he will be taken back to a county jail and then transported on the first available military flight to the military prison at Fort Leavenworth in Kansas. The timing on the flight wasn't immediately clear.

Hasan could become the first American soldier executed in more than half a century. But because the military justice system requires a lengthy appeals process, years or even decades could pass before he is put to death.

The lead prosecutor assured jurors that Hasan would "never be a martyr" despite his attempt to tie the attack to religion.

Death sentences are rare in the military, which has just five other prisoners on death row. The cases trigger a long appeals process. And the president must give final authorization before any service member is executed. No American soldier has been executed since 1961              .read story

Associated Press writer Will Weissert contributed to this report from Fort Hood.