Nikki Haley: I was asked by Cabinet members to take sides against the president  CBS News November 10, 2019,
Nikki Haley, the one-time Republican governor of South Carolina and former U.S. Ambassador to the United Nations, is no longer in public life. But if a recent visit to a high school near her hometown is any indication, the public isn't done with her. 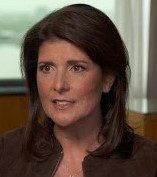 Excerpts from her interview....

O'Donnell asked, "Do you think ultimately the president will be impeached and removed from office?"

Haley replied, "No. On what? You're gonna impeach a president for asking for a favor that didn't happen and giving money and it wasn't withheld? I don't know what you would impeach him on. And look, Norah, impeachment is, like, the death penalty for a public official. When you look at the transcript, there's nothing in that transcript that warrants the death penalty for the president."

"To be clear, it was not a complete transcript. There are still things that are missing from it. And in it, he does say, 'I would like you to do us a favor, though.'"

"The Ukranians never did the investigation. And the president released the funds. I mean, when you look at those, there's just nothing impeachable there. And more than that, I think the biggest thing that bothers me is the American people should decide this. Why do we have a bunch of people in Congress making that decision?"