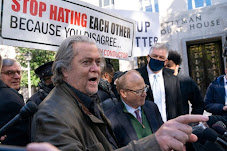 Stephen K. Bannon served as the White House‘s chief strategist in U.S. President Donald Trump’s administration during the first seven months of Trump’s term.
The host of the popular daily talk show and podcast, The War Room, became the first person in nearly 40 years to be indicted on a charge of criminal contempt of Congress last month after he refused to cooperate with the House committee investigating the Jan. 6 insurrection.

Bannon who was smiling and streaming live as he turned himself into the authorities, before posting bail, promised his audience he would get to the bottom of the January 6th and other investigations.
TWEET
The Real Dawn Star
@dawnstar1776
STEVE BANNON before turning himself in: “Watch the livestream on GETTR right now. I don’t want anyone to take their eye off the ball of what we do everyday. We got Hispanics, African Americans on our side, we’re taking down the Biden regime. STAY FOCUSED! SIGNAL NOT NOISE.”
In keeping with his public persona of always staying ahead of those opposed to the Deplorables and who are pro-China Communist Party (CCP), Bannon might be using his criminal case to go after the radical leftists on January 6th committee, who came after him.

Instead of running from the charges, Bannon is using his legal team to request all the evidence, including who the committee investigators spoke to and what they’ve said, discovery on what communications have taken place in the committee, and possibly develop a plan for other witnesses to use also, according to some legal experts.
READ MORE
Posted by Pappy at 7:33 PM