What political experience does Kathy Barnette bring to the GOP? What is it that would make people vote for her? Or is it like Ketanji Brown Jackson, she's a WOMAN and she's BLACK ! Is that it ??? ?

The conventional wisdom has been that Donald Trump might hurt Republican prospects in the midterms by endorsing and boosting flawed candidates. That’s a valid concern, but the Republican Senate primary in Pennsylvania is a showcase for a different dynamic — a flawed Trump-endorsed candidate potentially getting surpassed by a perhaps even more flawed non-endorsed MAGA Republican. 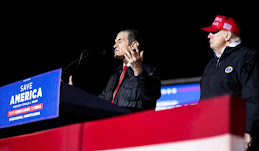 © Hannah Beier/Reuters Pennsylvania Republican Senate candidate Dr. Mehmet Oz speaks during a rally held by former President Donald Trump at the Westmoreland Fairgrounds in Greensburg, Penn., May 6, 2022.
Kathy Barnette, a little-known right-wing commentator running what had been a long-shot Senate campaign, has surged near the top of the multi-candidate field, pulling basically even with Mehmet Oz, the TV doctor endorsed by Trump.

Barnette, an African American, has a compelling personal story. She has spoken powerfully about her mother being raped when she was eleven years old and delivering Barnette when she was just twelve. The more people can hear this moving story the better, and the pro-life movement would be well-served to put her on the speaking circuit. But she’d be an enormous risk as the GOP’s Pennsylvania Senate candidate, reminiscent of the party’s picks who lost winnable Senate races in the Tea Party era, such as Christine O’Donnell and Sharron Angle.

She’s made statements over the years that will readily be used against her in a general-election campaign, and she’s been cagey about aspects of her past, including when she first moved to and voted in Pennsylvania. The party shouldn’t be putting itself in the position to find out more about all of this and fully vet Barnette after next Tuesday’s primary.

It is perhaps understandable that primary voters have been interested in Barnette, given the alternatives. Dr. Oz is a shrewd man and talented communicator with a successful TV show under his belt to prove it, but he’s not a conservative. He happened to win the contest for Trump’s endorsement, largely because of his celebrity, but his record of liberal statements on issues like abortion and guns has provided fodder for his Republican opponents.

The other major GOP candidate, Dave McCormick, is a former hedge-fund executive and an establishment Republican from central casting, although he’s been running as an “America First” candidate. He’d probably be a more reliable conservative vote in the Senate than Oz, but has run a lackluster campaign and isn’t a natural fit for working-class Pennsylvania.

If the Senate race isn’t tremendously encouraging, the gubernatorial race has been even worse. State senator Doug Mastriano has a solid lead in the latest polling. Endorsed by Trump on Saturday, Mastriano is a full-blown conspiracy theorist about the 2020 election and was outside the Capitol on January 6. Besides having demonstrated his unsuitability for major office, he’s the candidate Democrats hope to run against in November, and they’ve made their preference known by subtly promoting him. Either of the two Republicans currently running behind Mastriano, former representative Lou Barletta or former U.S. attorney Bill McSwain, would be better candidates, but they have to be rated long shots at this point.

Nominating train-wreck candidates at the state level could also be a drag on close House and state legislative races.

It’s going to be a Republican year in the midterms, the kind of year that often sweeps in unlikely and unworthy candidates — and the Pennsylvania Republican Party is acting like it’s banking on it.