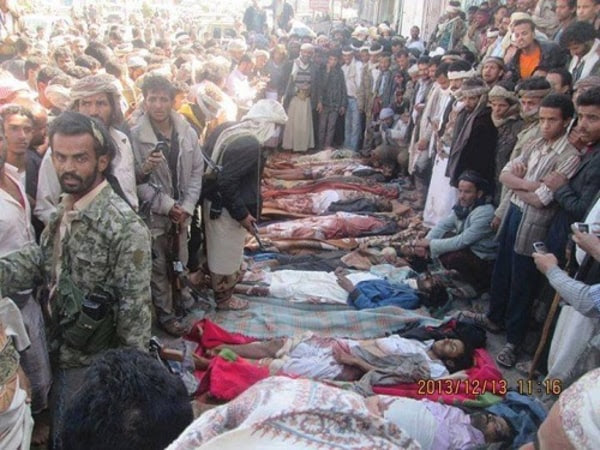 The bodies of nine men allegedly killed in a U.S. drone strike on Dec. 12 are lined up prior to burial near the town of Radda, Yemen. Villagers said the victims, among the dozen people killed in the strike, were on their way to celebrate a wedding when the attack occurred.
The Obama administration has launched an internal investigation into a Dec. 12 drone strike in Yemen that targeted an al Qaeda militant but which local villagers say ended up hitting a wedding party, killing 12 and injuring 14 others,
NBC News has obtained exclusive videos and photos taken in the aftermath of the strike. The graphic images show the scorched bodies of young men who villagers say were part of a convoy on their way to the wedding celebration when they were killed in their pickups by two Hellfire missiles fired by a U.S. drone. Show more
“You cannot imagine how angry people are (about the strike). They turned a wedding into a funeral,”
Posted by Pappy at 11:46 PM