One step closer to the start of the race war ?? 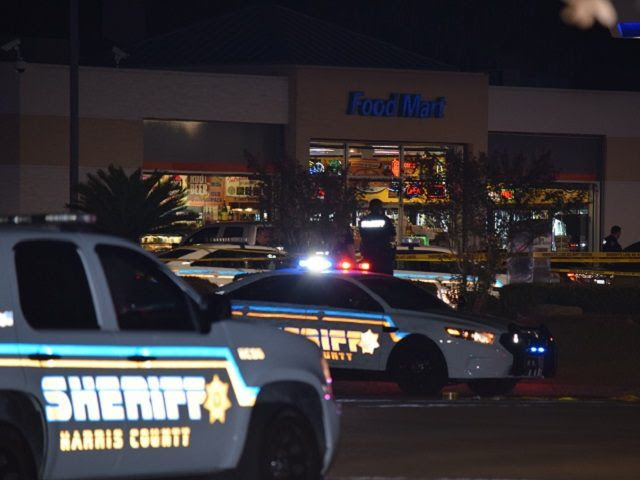 Photo: Breitbart Texas/Bob Price
by Bob Price and Lana Shadwick28 Aug 2015
HOUSTON, Texas — A Harris County Sheriff’s Deputy was shot execution style at a gas station while reportedly in full uniform. The deputy was filling up his patrol car. Witnesses told Breitbart Texas the shooter shot the deputy in the back of the head and then three times in the back. This tragedy comes within days of a group of Black radicals calling for “lynching whites and killing cops,” as Breitbart Texas recently reported. Witnesses also told Breitbart Texas that the shooter was a black male.
The shooting occurred late Friday evening in Northwest Harris County just outside of Houston. One witness who spoke to this writer said he knew the deputy personally and had just spoken with him about five minutes before the shooting.
He said he saw the man shoot his friend and speed off in a red pickup truck. He said he followed the truck for about two miles until he lost it at a major highway intersection. The truck turned onto Highway 6 from West Road and disappeared.
Deputies in the area confirmed they were indeed searching for a red Ford Ranger pickup truck.
Two teenage girls told Breitbart Texas they saw the shooter fire one shot into the back of the head of the deputy who was simply getting gas for his vehicle. After the deputy fell, they heard three or four other shots. According to the first witness, those shots were fired into the deputy’s back.
The execution of the deputy came just days after black radicals went on an internet radio show hosted from Texas and called for the lynching of white people and the killing of cops to “turn the tide” against blacks being killed by cops. Breitbart Texas reported on Friday morning the details of the radio show and the comments that were made.
One black man spoke up saying they needed to kill “cops that are killing us. The other black male on the show said, “That will be the best method right there.”
The shooter is described as male, dark complexion, five-foot-ten to six-foot. He was said to be wearing a white t-shirt and red shorts.
Witnesses said a LifeFlight helicopter came and picked up the deputy to take him to the hospital, but they believe he was dead at the scene.
The first witness showed this reporter a photo of the deputy with his children. He was highly emotional as he was speaking. “He was the best guy you can imagine as a friend,” the witness said. “He was always coming to me and asking if he could do anything for me.”
Posted by Pappy at 11:14 PM