Trump Threatens to Pull NY Times Credentials
Donald Trump Saturday threatened to revoke the credentials of The New York Times after the newspaper published a report detailing the "failing" effort by Republican Party operatives to "save Mr. Trump from himself."
"The newspaper's going to hell," Trump told a rally at Sacred Heart University in Fairfield, Conn. "They've got a couple of reporters in that newspaper who are so bad — I mean lack of talent. But it's going to hell.
"So, I think maybe what we'll do, maybe we'll start thinking about taking their press credentials away from them," the Republican nominee added, drawing cheers from the crowd.
"Maybe we'll do that. I think so. I think so.
"When they write dishonest stories, we should be a little bit tough, don't we agree?"
Many in the audience yelled "yeah."
The Times report, by Alexander Burns and Maggie Haberman, detailed efforts by staffers to keep Trump on script, focus more on policy and tone down his inflammatory rhetoric and combative style.
It was based on interviews with 20 Republicans, many of whom insisted on anonymity to avoid clashing with him," according to the Times.
The article also described a meeting Trump had with GOP political consultant Karl Rove and casino magnate Steve Wynn during primaries — from which Rove emerged "stunned" that the nominee knew little about campaign basics.
Trump slammed the Times for using anonymous sources, saying "I don't think they have any names."
In an overall attack on the press, Trump that it was his biggest competitor in this campaign, not Hillary Clinton.
"I'm not running against crooked Hillary," he said. "I'm running against the crooked media.
"That's what I'm running against, I'm not running against crooked Hillary."
Trump has revoked the press credentials of several media outlets, including Politico, The Washington Post and The Huffington Post.
"I'm no fan of the Washington Post, although they have been much nicer lately, I must say," Trump said Saturday. "Maybe I'll let them back in. they've been much better."
He also ripped CNN for its coverage of him saying that President Barack Obama was the "founder" of the Islamic State — a remark he later said was sarcastic, "but not that sarcastic."
"CNN is so disgusting," Trump said. "Their ratings are going down big league.
"You know why? Because I refuse to be interviewed. And I get high ratings, what can I say?
"These people are so dishonest."
He later praised an article from The New York Post, which detailed his contributions as a developer to New York City.
Trump slammed the Times report on Twitter: 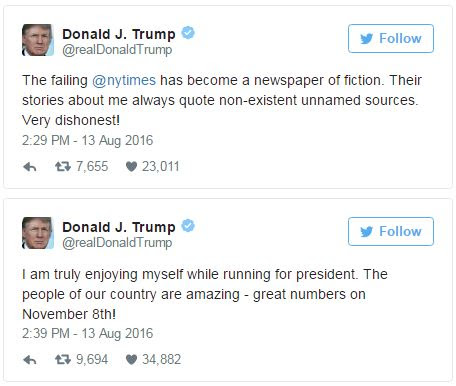