For months, the media has relentlessly pushed the story that Trump and his campaign have shady connections to Russia.
The left hung on every word, and believed the scandal would finish Trump for good.
But no one expected the story would take this deadly turn.
James T. Hodgkinson stalked Republican members of Congress at their practice for a charity baseball game.
He unleashed a hailstorm of 50 bullets and wounded five, including House Majority Whip Steve Scalise.
What motivated Hodgkinson to such madness?
He was a leftist who believed Trump was a Russian plant and needed to be held accountable.
His insane beliefs were fed by a daily diet of media outlets promoting this conspiracy theory.
Hodgkinson was a fan of the Rachel Maddow show.
Her program is a nightly hotbed of Trump-Russia conspiracy theories.
And while Maddow in no way bears personal responsibility for inciting the attack, her show provided a forum for unsubstantiated claims that the Trump campaign and the Russians were engaged in some sort of shady business.
Critics claim this fact-free conspiracy stoked the delusions of a madman like Hodgkinson. 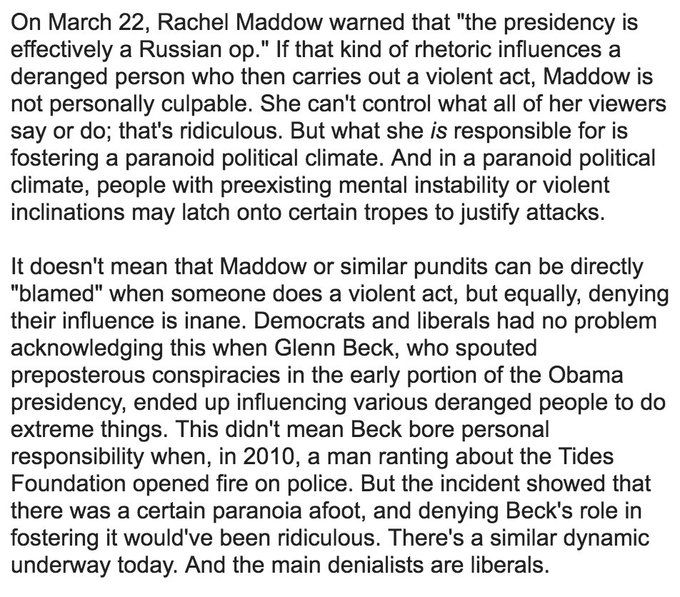 calling Trump "dangerous" is "passive justification" for shooting people. why is this type of cynical opportunism being taken seriously?

left unmentioned in the NYT piece:
1. Hodgkinson's history of domestic violence
2. Hodgkinson's obsession with Trump as pro-Russia "traitor"
Posted by Pappy at 4:16 PM