CALIFORNIA IS UPSIDE DOWN, BACKWARDS 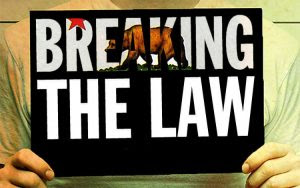 California is a national disgrace.  It's a beautiful state, with awful, AWFUL public policy that has led to streets of excrement from illegal immigrants and poor homeless people, ANTIFA riots where they fling this poop like primates, and so much illegal immigration it costs the states $23 billion a year.
So what has the governor done? Jerry Brown has signed a Bill that will give the people illegally in the state a right that under the UNITED STATES CONSTITUTION is limited to citizens alone.
Time to let them secede. Read this and weep.