B0rrowed from "The Daley Gator" 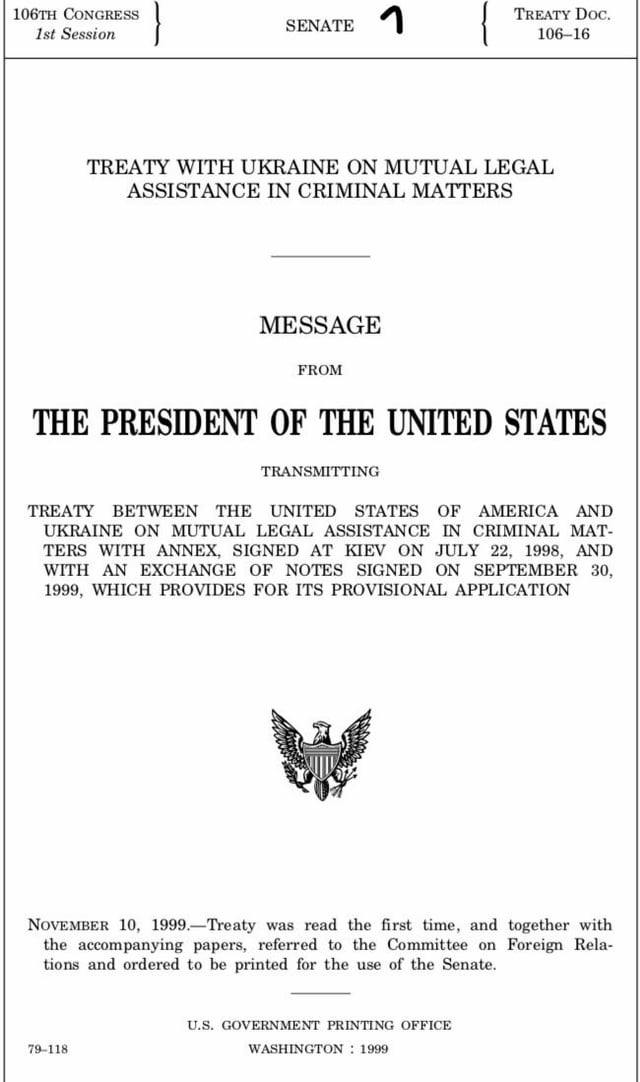 “To the Senate of the United States: With a view to receiving the advice and consent of the Senate to ratification, I transmit herewith the Treaty Between the United States of America and Ukraine on Mutual Legal Assistance in Criminal Matters with Annex, signed at Kiev on July 22, 1998. I transmit also, for the information of the Senate, an exchange of notes which was signed on September 30, 1999, which provides for its provisional application, as well as the report of the Department of State with respect to the Treaty. The Treaty is one of a series of modern mutual legal assistance treaties being negotiated by the United States in order to counter criminal activities more effectively. The Treaty should be an effective tool to assist in the prosecution of a wide variety of crimes, including drug trafficking offenses. The Treaty is self-executing. It provides for a broad range of cooperation in criminal matters. Mutual assistance available under the Treaty includes: taking of testimony or statements of persons; providing documents, records, and articles of evidence; serving documents; locating or identifying persons; transferring persons in custody for testimony or other purposes; executing requests for searches and seizures; assisting in proceedings related to restraint, confiscation, forfeiture of assets, restitution, and collection of fines; and any other form of assistance not prohibited by the laws of the requested state. I recommend that the Senate give early and favorable consideration to the Treaty and give its advice and consent to ratification.”
WILLIAM J. CLINTON.
https://www.congress.gov/106/cdoc/tdoc16/CDOC-106tdoc16.pdf
Posted by Pappy at 10:52 PM