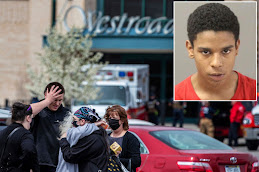 And ironically this incident will just disappear now that it’s known the suspect was black, not white.

A 16-year-old boy has been arrested in a shooting that left a man dead and a woman injured at a mall in Nebraska, officials said.

Makhi Woolridge-Jones was busted Sunday on a charge of first-degree murder in the shooting a day earlier at the Westroads Mall in Omaha.

Brandon Woolridge-Jones, 18, was arrested earlier on a charge of being an accessory to the shooting near the JCPenney store.

The relationship of the two suspects was not reported.

The last shooting at that mall in Omaha was by a black guy. Pretty much any shooting at any mall in Omaha is. I'm glad my two daughters moved to towns outside of Douglas County. I wish my three sons (great name for a TV show) would.