Some blacks and demoRats in general think they can say or do whatever they want...and get away with it.....especially if they're "politicians"

Some Democrats ‘So Angry’ At Maxine Waters That They Will Back Censure Resulting In Her Losing Chair  By Ryan Saavedra•  Apr 20, 2021 DailyWire.com• 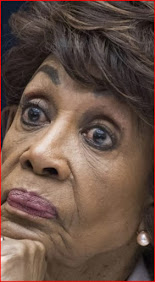 Some Democrat lawmakers are reportedly “so angry” with remarks Rep. Maxine Waters (D-CA) made over the weekend about the Chauvin trial that they are willing to back her GOP-led censure, which would strip her of her position as chairwoman of the House Financial Services Committee.

Waters said at a protest in Minnesota over the weekend that “protesters” were “looking for a guilty verdict,” and if they don’t get what they want, then “we cannot go away.” Regarding what “protesters” should do if they do not get the verdict that they want, Waters responded that activists have “got to stay on the street,” “get more active,” and “get more confrontational.”

Fox News reporter Chad Pergram reported that the anger among some Democrats “metastasized” after Judge Peter Cahill, who is presiding over the case involving the death of George Floyd, slammed Waters on live television during closing arguments on Monday.

“Some Democrats conceded privately they are not pleased with House Speaker Nancy Pelosi (D-CA) saying that Waters shouldn’t apologize,” Pergram wrote. “Fox is told that a lot of Democrats are angry at Waters, are concerned about the optics of potential violence being linked back to her and Democrats generally.”

Pergram noted that moderate Democrats were damaged during the election after far-left members of the party pushed the “defund the police” movement. The reason those Democrats are reportedly mad at Waters doesn’t appear to be based on any kind of moral conundrum they have with what she said, but rather because they are “concerned about the optics of potential violence being linked back to her and Democrats generally.”