After arresting hundreds of people and holding them in jail, (in DC) most in solitaire, NOW the DemoRats want to start an investigation. Here's an idea, let all those being held in prison go (those being held as GUILTY UNTIL PROVEN INNOCENT) THEN...and only then, do the arresting when they can determine if charges are warranted.. 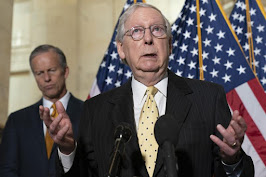 WASHINGTON (AP) — The House voted Wednesday to create an independent commission on the deadly Jan. 6 insurrection at the U.S. Capitol, sending the legislation to an uncertain future in the Senate as Republican leaders work to stop a bipartisan investigation that is opposed by former President Donald Trump.
Democrats say an independent investigation is crucial to reckoning what happened that day, when a violent mob of Trump’s supporters smashed into the Capitol to try and overturn President Joe Biden’s victory. Modeled after the investigation into the Sept. 11, 2001, attacks, the legislation would establish an independent, 10-member commission that would make recommendations by the end of the year for securing the Capitol and preventing another insurrection.

The bill passed the House 252-175, with 35 Republicans voting with Democrats in support of the commission, defying Trump and House Republican leader Kevin McCarthy. Trump issued a statement urging Republicans to vote against it, calling the legislation a “Democrat trap.”
READ ON
Posted by Pappy at 8:05 PM