Biden Has Lied For Years About The Accident That Killed His First Wife And Daughter In December 1972  Posted on October 1, 2020 by DianCecht 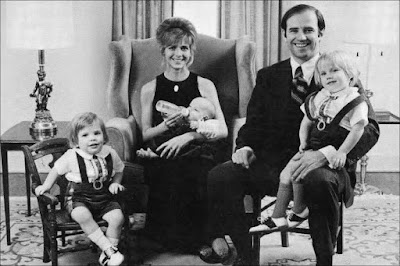 ✪ Dunn was the tractor-trailer driver involved in the December 1972 accident that took the life of the newly-elected U.S. Senator’s first wife, Neilia Biden, and 13-month-old daughter, Naomi…

The facts are that Joe Biden’s wife accidentally drove into the path of the tractor-trailer. She was killed, along with their baby daughter. His two sons were seriously injured.

For decades, Joe Biden lied about the cause of the accident as he exploited the accident to promote his candidacy. He shamefully changed the details of the story, claiming the driver was drunk and responsible for the accident.

Alcohol was not involved. Somehow the police reports were lost. But, fortunately, Delaware Superior Court Judge Jerome O. Herlihy, who oversaw the police investigation as chief prosecutor, remembered. He said there is no evidence supporting Biden’s claim.

“The rumor about alcohol being involved by either party, especially the truck driver (Dunn), is incorrect,” Herlihy said in 2008.

Police determined that Biden’s first wife drove into the path of Dunn’s tractor-trailer, possibly because her head was turned and she didn’t see the oncoming truck.

Dunn did everything he could to avoid hitting the car. He even overturned his rig while swerving to avoid a collision. He ran to the wrecked car and was the first to render assistance.

Police filed no charges against Dunn, who at that time lived in North East, Md. with his wife, Ruby, and their seven children.

Beginning in the new Millenium, Biden started to embellish the story, seemingly for political gain. During a speech in 2001, Biden told an audience at the University of Delaware that a drunken driver crashed into his family.

He told a similar story during a public appearance in 2007.

The vice-presidential candidate’s misrepresentation of Dunn found its way into major newspapers, including the New York Times.

It also has been repeated on radio and on television by major news journalists, including CBS anchorwoman Katie Couric.

A video of Biden making his unfounded assertion during a public appearance in 2007 was particularly disturbing.

Mr. Dunn was tormented by the accident for years.

The tragedy for Biden of losing his wife and daughter is very sympathetic, but embellishing it and accusing an innocent man of drunk driving is not. ✪

Is that a meth pipe stuffed in Hunter's sock?