Joe Biden Babbles When Asked About Children Getting Vaxxed 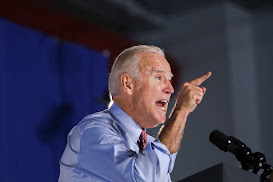 (TheLibertyRevolution.com)- On Wednesday, President Joe Biden held a town hall in Cincinnati that aired on CNN. It was such an unmitigated disaster, hardly anyone in the corporate news media is reporting on it.
It’s unclear why the White House would put Joe Biden on live television late in the day when his ability to formulate a coherent sentence is at its worst. But they did, and he was a train wreck.

Even with a supportive, sycophantic Don Lemon as his moderator, Biden floundered and meandered, while often getting lost on his way to a point.

Early on, when trying to discuss the possibility of vaccinating children under twelve, Biden struggled painfully – burping out a meaningless word salad and eventually getting to some sort of point that had nothing to do with the question.
READ ON
Posted by Pappy at 9:11 PM