Simone Biles is Being Penalized for Being Exceptional    She’s the only one who can do what she does, and that scares people 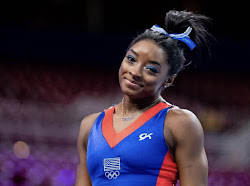 Simone Biles is arguably the best gymnast to ever compete. She has won every World Championship she has competed in since 2013, and she is the most decorated gymnast of all time.
Her 2016 Olympic teammate, Aly Raisman said about competing against her, “If you get silver, you’re the best because Simone doesn’t count.”

Biles is constantly pushing the boundaries of the sport and pushing herself to be the best gymnast she can be. She is the first female gymnast to attempt the Yurchenko double pike, and has developed, perfected, and is now planning to compete with two new moves that are named after her.

So how is she being penalized ?

Doesn't matter what she did in the past....she QUIT. And she did it after occupying a spot on the team and then leaving her teammates in a lurch. She quit NOT because she couldn't compete but because she decided she didn't want to. If she didn't want to be a part of the team she should have bowed out BEFORE the team roster was set. She will FOREVER be known as a QUITTER....nothin more.