It has been revealed that Cassidy Hutchinson, the Democrat’s surprise star witness at its January 6 show trials, was singing a different tune months ago in text messages where she called the left-wing kangaroo court a bunch of “BS.”

Hutchinson, a former aide to President Donald Trump’s White House chief of staff Mark Meadows in 2020, was brought in for what the Democrats and their compliant media operatives called “bombshell” testimony, though most of what she said was quickly debunked as fake news. After it was all said and done, it was more fizzle than bombs, but the left played it as big, big news.

Indeed, after her testimony, the cameras caught a telling moment when embattled Wyoming Rep. Liz Cheney was seen throwing her arms around Hutchinson and offering great thanks for her quickly discredited claims. 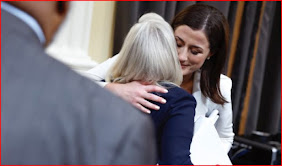 If questioner (Cheney) wants to appear fair to jury (American people), it probably is not a good idea to get caught on camera hugging the witness…see below from @Politico;already people have very strong feelings - both ways - about this hearing and pics like this don’t help;
Still, it seems that Hutchinson had a whole different attitude about the Democrats’ Jan. 6 hearings back in February when she was served a subpoena by the committee to appear before them.

According to conservative activist Matt Schlapp, who heads up the long-time conservative convention CPAC, Hutchinson was trying to contact them for help defending herself before the Democrat onslaught, and even called the Jan 6 committee a bunch of “BS.”

On June 28, Schlapp blasted Hutchinson for “relaying WH hallway gossip as fact,” and revealed that she was seeking help ahead of her testimony.

TWEET
Matt Schlapp
@mschlapp
Ms. Hutchinson approached @CPAC for help through our First Amendment Fund which has helped J6 political victims defend themselves. I am pleased we did not assist her performance today. Relaying WH hallway gossip as fact does not qualify as first person testimony
Jody Hunt@realJodyHunt  Jun 28
Ms. Hutchinson testified, under oath, and recounted what she was told. Those with knowledge of the episode also should testify under oath. twitter.com/PeterAlexander…
8:40 PM · Jun 28, 2022·Twitter for iPhone
According to the Daily Caller, Hutchinson seemed keen to find some way of avoiding her appearance before the committee.

Hutchinson reportedly contacted one of Schlapp’s associates looking for a way to get the American Conservative Union or the First Amendment Fund POC to come to her aid.

“Do you happen to know a First Amendment fund POC I could reach out to? I was subpoenaed in early Nov., but the committee waited to serve me until last week (after Ben’s deposition),” Hutchinson texted the Caller reported.

“I had to accept service because the U.S. Marshalls came to my apartment last Wednesday, but I haven’t made contact with the Committee. I’m just on a tight timeline and just trying to figure out what my options are to deal with this BS,” Hutchinson continued.

Hutchinson also said that she didn’t want the situation to get “unnecessarily elevated.”

This series of communications makes one wonder what changed between calling the hearings “BS” and hoping that it all stays under the radar to suddenly becoming an out, loud and proud Democrat “bombshell” witness? What was Hutchinson offered to make such a splash during a “surprise” scheduling?

During her testimony, Hutchinson made several key claims, none of which ring true.

In one case, she claimed that Donald Trump actually assaulted members of the Secret Service and tried to take control of the presidential SUV on Jan. 6 with the intention of driving to the Capitol Building to join the rioting there.

Hutchinson testified that Tony Ornato, former Trump Deputy Chief of Staff for Operations, told this story to her in the days after the riot.

But since then, Ornato says that he was nowhere near Trump and the SUV and that he never heard such a story before — and he certainly never told any such tale to Hutchinson.

Further, both Bobby Engel, the top agent on Trump’s Secret Service detail — who was actually in the SUV — and Ornato had already testified before the committee and no such story was revealed during their separate comments.

In another instance of her appearance, Hutchinson also claimed that she wrote a memo from Mark Meadows that had been placed in evidence before the committee. “That’s a note that I wrote at the direction of the chief of staff on Jan. 6, likely around 3 o’clock,” she said of the document.

However, the committee had already determined the memo had not been written by Hutchinson, and no one noted that during her false testimony.

A spokesperson for Herschmann told ABC News on Tuesday evening, “The handwritten note that Cassidy Hutchinson testified was written by her was in fact written by Eric Herschmann on Jan. 6, 2021. All sources with direct knowledge and law enforcement have and will confirm that it was written by Mr. Herschmann,” the representative said.