The Supreme Court fires broadside against the Constitution  BY HARLAN ULLMAN, OPINION CONTRIBUTOR 07/04/22

In its decisions to strike down the constitutional right to abortion and New
York City’s concealed firearms ban, the Supreme Court has let loose a 21st century volley amid an ongoing political, cultural and social uncivil war not seen since the firing on Fort Sumter in 1861. 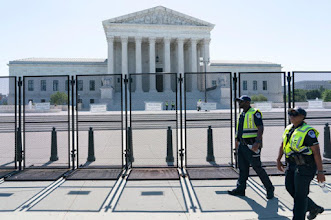 These decisions have now created a “doctrine of selective inference” in the court’s interpretation of the law. This raised a judicial double standard that, ironically, will make the underlying reasoning of Dred Scott (1857) and Plessey v. Ferguson (1896) relevant again. And one consequence of returning the legality of abortion to the states is that it may well metastasize into a condition of permanent legal strife.

Proponents and opponents of these decisions should be very worried given the divisive, disruptive and contradictory consequences that will arise from these cases. About abortion and concealed carry, nowhere in the Constitution are abortion or self-defense as a reason for carrying a concealed weapon explicitly stated or enumerated.

Roe v. Wade inferred from the 14th Amendment that abortion was constitutional. By torturing and distorting the Second Amendment beyond the court’s 2008 Heller ruling , it inferred a constitutional right for concealed carry.

The court struck down Roe, asserting there was no inferred right in the Constitution to abortion. But stunningly, the court contradictorily struck down the New York law interpreting the 2nd Amendment as making concealed carry legal. Hence, a doctrine of selective inference in which ideology and politics and not the law seems to take precedence.
Consider one consequence. Suppose a woman living in a state that bans abortion travels to a state where the procedure can be legally performed. According to some state laws, she could be arrested upon returning for violating the relevant statute banning abortion. Or could an arrest warrant be honored if she did not return? How would the court rule in such a case?

This contradiction makes Dred Scott relevant. That case concluded that a slave who was taken or escaped to a free state was still the property of his or her owner and if apprehended must be returned. The same flawed logic seems to apply in 2022.