So...Pelosi doesn't think ANYONE needs or is entitled to know what SHE AND HER COHORTS are doing !! YOU JUST HAVE TO TAKE HER WORD THAT EVERYTHING SHE DOES IS LEGAL AND ABOVE BOARD....

Judicial Watch  From JudicialWatch President Tom Fitton: CORRUPTION: Pelosi Congress is HIDING ever single one of their 1/6 security-related emails (and the 14,000 hours of videos) while making fake claims about Trump and 1/6. https://www.judicialwatch.org/pelosi-congress-claims.../ 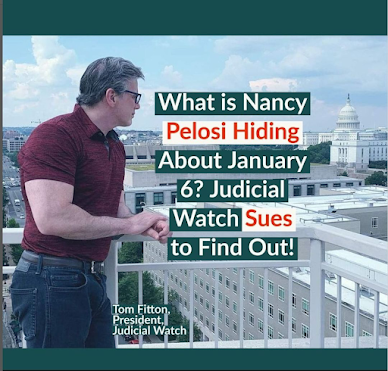 Pelosi Congress Claims Sovereign Immunity in Federal Court to Keep Secret January 6 Videos and Emails
(Washington, DC) – Judicial Watch announced that it filed an opposition to the U.S. Capitol Police’s (USCP) effort to shut down Judicial Watch’s federal lawsuit for January 6 videos and emails. Through its police department, Congress argues that the videos and emails are not public records, there is no public interest in their release, and that “sovereign immunity” prevents citizens from suing for their release.

Congress exempts itself from the Freedom of Information Act. Judicial Watch, therefore, brought its lawsuit under the common law right of access to public records. In opposing the broad assertion of secrecy, Judicial Watch details Supreme Court and other precedent that upholds the public’s right to know what “their government is up to:”

The Court of Appeals for this circuit has recognized that “openness in government has always been thought crucial to ensuring that the people remain in control of their government….” “Neither our elected nor our appointed representatives may abridge the free flow of information simply to protect their own activities from public scrutiny. An official policy of secrecy must be supported by some legitimate justification that serves the interest of the public office.”

“The Pelosi Congress (and its police department) is telling a federal court it is immune from all transparency under law and is trying to hide every second of its January 6 videos and countless emails,” stated Judicial Watch President Tom Fitton. “The hypocrisy is rich, as this is the same Congress that is trying to jail witnesses who, citing privileges, object to providing documents to the Pelosi rump January 6 committee.”
In November 2021, Judicial Watch revealed multiple audio, visual and photo records from the DC Metropolitan Police Department about the shooting death of Ashli Babbitt on January 6, 2021, in the U.S. Capitol Building. The records include a cell phone video of the shooting and an audio of a brief police interview of the shooter, Lt. Michael Byrd. In October, Judicial Watch released records, showing that multiple officers claimed they didn’t see a weapon in Babbitt’s hand before Byrd shot her, and that Byrd was visibly distraught afterward. One officer attested that he didn’t hear any verbal commands before Byrd shot Babbitt.

Also in November, Judicial Watch filed a response in opposition to the Department of Justice’s effort to block Judicial Watch’s Freedom of Information Act (FOIA) lawsuit asking for records of communication between the Federal Bureau of Investigation (FBI) and several financial institutions about the reported transfer of financial transaction records of people in DC, Maryland and Virginia on January 5 and January 6, 2021. Judicial Watch argues that Justice Department should not be allowed to shield “improper activity.”
Posted by Pappy at 1:20 PM