Trump: Mexico's 'Killing Us' at Border and on Trade   PHOENIX — Jul 11, 2015,By BOB CHRISTIE and KIM PIERCEALL Associated Press 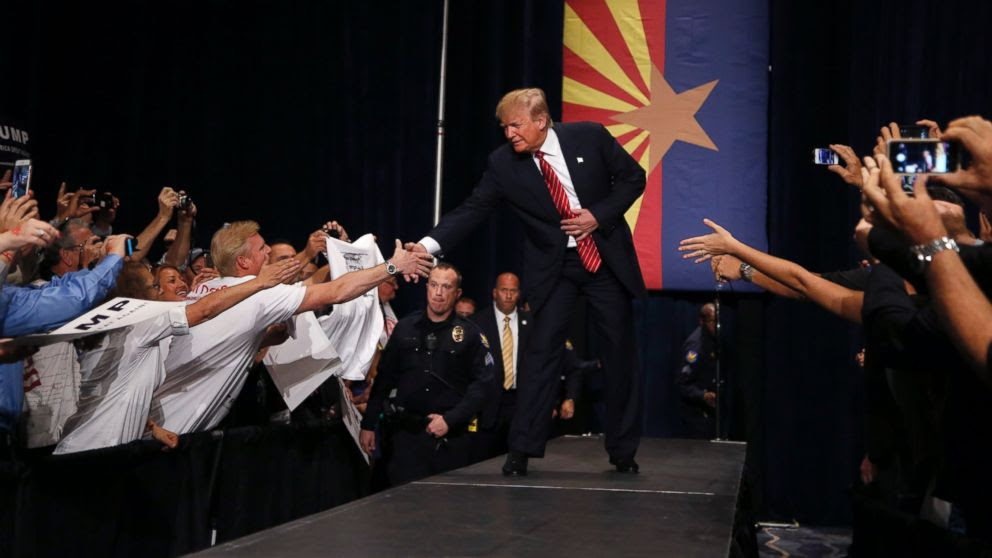 Republican presidential candidate Donald Trump shakes hands as he arrives to speak at a rally before a crowd of 3,500 Saturday, July 11, 2015, in Phoenix.
Ross D. Franklin/AP Photo
Republican presidential hopeful Donald Trump criticized U.S. immigration and trade policies on Saturday in speeches that veered from accusing Mexico of deliberately sending criminals across the border to professing respect for the Mexican government and love for its people.
Speaking to a gathering of Libertarians in Las Vegas before headlining an event in Phoenix, Trump repeated his charge that Mexico was sending violent offenders to the U.S. to harm Americans and that U.S. officials were being "dumb" in dealing with immigrants in the country illegally.
"These people wreak havoc on our population," he told a few thousand people attending the Libertarian gathering FreedomFest inside a Planet Hollywood ballroom on the Las Vegas Strip.
In the 4,200-capacity Phoenix convention center packed with flag-waving supporters, Trump took a different view — for a moment — and said: "I love the Mexican people. I love 'em. Many, many people from Mexico are legal. They came in the old-fashioned way. Legally."
He quickly returned to the sharp tone that has brought him scorn as well as praise. "I respect Mexico greatly as a country. But the problem we have is their leaders are much sharper than ours, and they're killing us at the border and they're killing us on trade."
STORY
Posted by Pappy at 11:09 PM