Judicial Watch To Booker: You Said Bring It On, So We Are 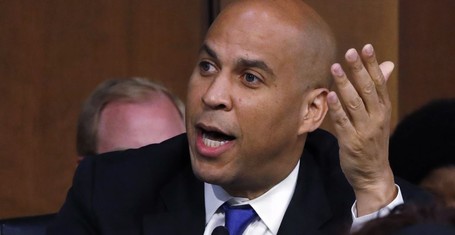 Government watchdog Judicial Watch has filed an ethics complaint against Democrat Senator Cory Booker for deliberately breaking Senate rules and releasing confidential Senate Judiciary Committee documents for political gain. Booker did so during the confirmation hearing for Judge Brett Kavanaugh.
"By publicly releasing Committee Confidential records, Sen. Booker appears to have violated provisions 5 and/or 6 of Rule 29 of the Standing Rules of the Senate (Rev. Jan. 24, 2013)," Judicial Watch details in a letter delivered to to the chairman and co-chairman of the U.S. Senate Select Committee on EthicsWednesday. "We hereby request that the Senate Ethics Committee conduct a preliminary investigation into whether Sen. Booker violated Senate Rules by releasing Committee Confidential records through his social media accounts."
READ MORE
Posted by Pappy at 4:18 PM