Sponsored ⋅ Paid for by Judicial Watch ·
BREAKING: Judicial Watch announced today it received 211 pages of emails between former FBI officials Peter Strzok and Lisa Page that detail special accommodations given to the lawyers of Hillary Clinton and her aides during the FBI investigation of the Clinton email controversy.
The new emails include a discussion about negotiations with Beth Wilkinson, a lawyer for the Clinton lawyers who gathered and then deleted 33,000 emails for Hillary Clinton, over the destruction of laptops provided to the FBI.
Judicial Watch President Tom Fitton: “As the Obama Justice Department and FBI bent over backwards to protect Hillary Clinton, these agencies broke every law under the sun to spy on her political opponent, Donald J. Trump. AG Barr and Director Wray must stop the stonewalling about this corruption and reopen the Clinton email investigation.”
READ: http://jwatch.us/P1YWGq 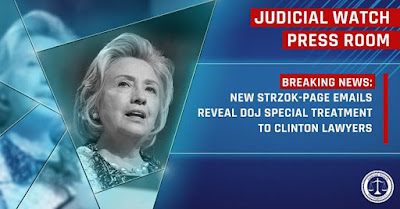