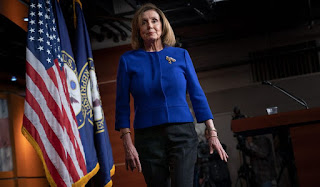 “Today’s a happy day for us,” she said in a grating halt to the solemnity of the moment.
Almost in sing-song, she explained, “We are going to celebrate the wedding of Barbara Lee!”
It was jarring. Barbara Lee is one of her House lieutenants, but what her wedding had to do with any of the serious and pressing global matters at hand today was anybody’s guess.
Mrs. Pelosi stammered and stared around, apparently confused about when the wedding was, where the celebration would be or why any of it was relevant in this grave moment. She felt the urge to explain.
“I convey that to you because it is a source of joy to us, as she is a source of joy.” Silence was the only response from those gathered in the room with pen and pad looking on.
Apparently feeling that she had not made the case, Mrs. Pelosi quickly added: “And her service to the country. And her personal happiness is lovely.”
Her eyes glimmered and she smiled as if recalling a far-off memory from a place far, far away.
Third. In. Line. To. The. Presidency. This is a woman who should be carted off to the insane asylum, and not be leading Congress.
As terrifying as it is to watch Mrs. Pelosi bumble around talking about fantastical niceties during a national crisis, she is even more terrifying when she gets down to business.
“In any event, here we are,” she continued airily.
“We’ve got the ‘I’s.’ Imp — uh, Iran. Impeachment. Let me start with Iran,” she said as she shuffled notecards on the podium that appeared to confuse her.
She had some urgent legislation she would put on the House floor immediately dealing with Iran — entirely ceremonial legislation since the conflict with Iran appears to have died down after the Mullahs deployed Operation Pound Sand, in which thankfully no Americans were killed or injured.

But urgent nonetheless to her.
Was it to condemn Qassem Soleimani, the terrorist killed last week? Would the legislation celebrate his wonderful death?
Or maybe the Iranian regime? Mrs. Pelosi might offer legislation condemning the hostile and malign activity of the theocratic government of Iran. Or, might it warn them in no uncertain terms against continuing to spread terror and bloodshed around the globe?
Perhaps, more specifically, Mrs. Pelosi’s legislation would condemn Iran for shooting down a civilian airliner, killing 167 innocent people.
No. None of the above.
Mrs. Pelosi’s legislation was aimed at Mr. Trump. In all of the gravity and terror of the past week, Mrs. Pelosi’s only urgent response is to constrain the American president against Iran and the terrorists who chant, “Death to America!”
“The administration conducted a provocative, disproportionate airstrike against Iran, which endangered Americans and did so without informing Congress,” she sniffed. What, precisely, would have been a more proportionate response for a terrorist plotting to kill American troops and diplomats Mrs. Pelosi did not say.
She was off to celebrate the wedding of Barbara Lee.