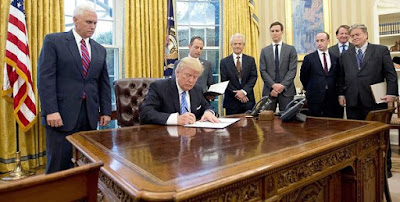 President Trump has warned that he will veto a Foreign Intelligence Surveillance Act bill recently passed by the House if the "attempted coup" that started the Russia investigation are not investigated.

President Trump on Thursday warned he could veto the newly House-passed Foreign Intelligence Surveillance Act bill until the origins of the Russia probe, which he called an “attempted coup,” are investigated.

“Many Republican Senators want me to Veto the FISA Bill until we find out what led to, and happened with, the illegal attempted ‘coup’ of the duly elected President of the United States, and others!” Trump tweeted Thursday.

The comments come after the House passed legislation with broad bipartisan support to reauthorize FBI crime-fighting tools that are set to expire on March 15. The bill would reform the FISA court process that has especially been under the microscope in the Russia investigation.

The USA Freedom Reauthorization Act -- which passed by a 278-136 vote -- brought together the most vocal supporters of Trump, like Reps. Devin Nunes, R-Calif., Jim Jordan, R-Ohio, and some of his fiercest critics like Reps. Jerrold Nadler, D-N.Y., and Adam Schiff, D-Calif., who wanted improvements to protect Americans’ privacy and safeguard against surveillance abuses.

Many pro-Trump Republicans supported the bill and it has been lauded as a major step to stopping abuse by Attorney General Bill Barr and FBI Director Christopher Wray.

Despite the support, President Trump seems to be using it to his advantage. Maybe..?
I don't blame him...everyone knows the truth and HE deserves to have it proven and spoken out loud