A California duo has been charged with a hate crime for painting over a BLM mural.

Apparently the legal term “hate crime” has lost all meaning.

The two individuals accused of painting over the Black Lives Matter mural in the Bay area of California are facing hate crime charges.

For the last month, "peaceful protesters" have destroyed businesses and torn down statues with little resistance, but two people paint over a mural and it's time to charge them with a hate crime.

For the last month, "peaceful protesters" have destroyed businesses and torn down statues with little resistance, but two people paint over a mural and it's time to charge them with a hate crime.

Fox News has more on the story:

Two California residents were charged with a hate crime and other offenses Tuesday after they were captured on video allegedly covering up a Black Lives Matter mural.

The Contra Costa District Attorney’s Office identified the pair as Nicole Anderson, 42, and David Richard Nelson, 53, both of Martinez, Calif.

“We must address the root and byproduct of systemic racism in our country. The Black Lives Matter movement is an important civil rights cause that deserves all of our attention,” District Attorney Diana Becton said.

Cellphone video recorded by a witness allegedly showed Anderson using black paint and a roller brush to cover over the mural, specifically the letters “B” and “L” in the word “Black" on the Fourth of July.

A heated confrontation ensued between supporters of the mural and Nelson, who was allegedly heard yelling "All lives matter!"

Activists with a local Black Lives Matter movement had painted the slogan outside a courthouse in Martinez earlier on July 4 in big yellow letters. The mural was painted over within an hour of it being completed, FOX 2 of the Bay Area reported.

The country doesn't seem to have its priorities stright when an incident like this is viewed as a hate crime while looting and destroying are ignored. 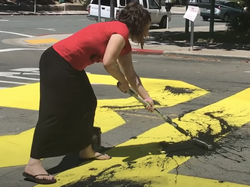