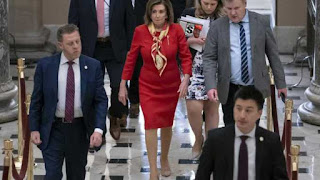 According to the Dunning-Kruger Times, Nancy Pelosi was removed from the House Floor for drunken and disorderly conduct. To make matters worse, this was during the vote count for the stimulus aid bill. Pelosi cares so little for Americans that she would show up drunk to this important vote.

Here is an excerpt from one of Pelosi’s many drunken outbursts that day:

“You’re all a bunch of a**holes! You need to be voted out since you don’t give two sh*ts about the American people! Their lives are on your hands. You’re a bunch of knuckle-dragging oxygen thieves. In fact, we should charge your for all that oxygen you waste every day, especially you turtle-looking f*ck from Kentucky. Get fu**ed! We’re going to impeach that orange bastard again you can best believe it!”

After this outburst, the Sergeant at Arms, Joe Barron grabbed her and escorted her out as she kicked and screamed about her rights being violated:

“Do you know who I am?! You’re violating my rights you fascist brownshirt! I’m the Speaker of the House! You’re going to regret this”

Republicans clapped and cheered as Pelosi was thrown out of the chamber. Democrats vowed to cover up this incident so it wouldn’t be known to Americans, but we are here to report the truth of what happened.

Pelosi has long been known to be an alcoholic, but this is too far, even for her. It’s time for her to be forced into retirement. She is a bad influence and doesn’t care about anyone but herself. She needs to go.
Posted by Pappy at 2:11 PM