Nancy And Maxine Cross The Line On Trump – Pelosi Claims She Is Going To “Pull Him Out” Of The White House  By Daniel Ottomire|  December 23, 2020  American Journal 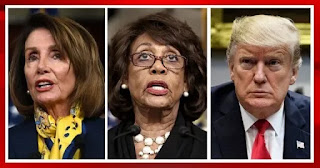 But it’s not Inauguration Day, yet. And Trump is not one to say something for no reason. If he thinks the election was rigged, any sane person should take him seriously.

He continues to refuse to concede, driving nut jobs crazy. Nancy Pelosi, on the brink of insanity, thinks she is going to remove Trump herself. From IJR:

Politico reports that the House speaker told her leadership team over the weekend, “I’m counting down the hours ’til he’s gone.”

“I plan to pull him out of there by his hair, his little hands, and his feet,” she added.

And California Democrat Maxine Waters was even bolder.

Representative Maxine Waters (D-CA) revealed Tuesday on MSNBC that she would like to see President Donald Trump “marched out” of the White House by either the military or Secret Service.

It’s funny how these House members think they have the authority to order the president out of office.

This seems to show that people like Pelosi and Waters don’t really respect our democratic system. After all, they thought they could impeach and remove Trump from office over a phone call.

It shouldn’t surprise us that they think they can “march” Trump out of office before everything’s said and done.

The media and the left (and cowardly Republicans) keep pushing a narrative that we dare not question. They want us to accept the results of the election, despite concerning issues that have not been resolved.

We can’t say for sure how it will all shake out, but methinks Nance’s overconfidence will be her undoing.

This was never about what was right for the country—but about getting rid of Trump. Democrats can’t seem to stand that he actually wants to put Americans ahead of the toxic D.C. swamp.

Democrats in the House think that if Biden gets into office, their dreams will come true. But remember, these were the same goons in office when Obama was president.

And all these “accomplishments” were wiped out in Trump’s first term. What do they think they’ll accomplish with a man like Sleepy Joe?
Posted by Pappy at 5:27 PM