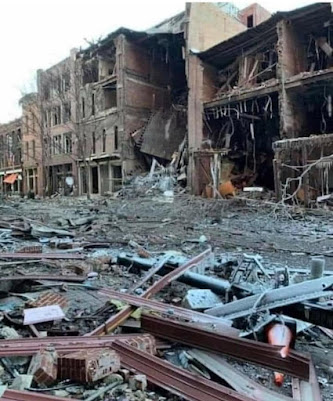 Nashville, Tennessee Bombing:
AT&T was given a contract for the forensic audit on Dominion voting machines, that were being moved to Nashville this past week.

The former owner of the AT&T building in Nashville, William Kennard, is a board member for Cerberus Capital Management and AT&T. He was also Bill Clinton’s FCC chair, and Obama’s Ambassador to the EU.

Super Computer in TN was connected to the AT&T internet in Nashville and Thursday evening, the Cumberland river cooling system was compromised due to internet outage and the supercomputer fried.

If you don’t know, “Kraken” is a reference to a supercomputer former prosecutor, Sidney Powell, was talking about.

So, the explosion “just happened” to be at the AT&T location where they control the cooling system for the super computer and house the dominion voting machines and drives for forensic audit.

But I’m sure it’s just another conspiracy, right?
Posted by Pappy at 4:59 PM